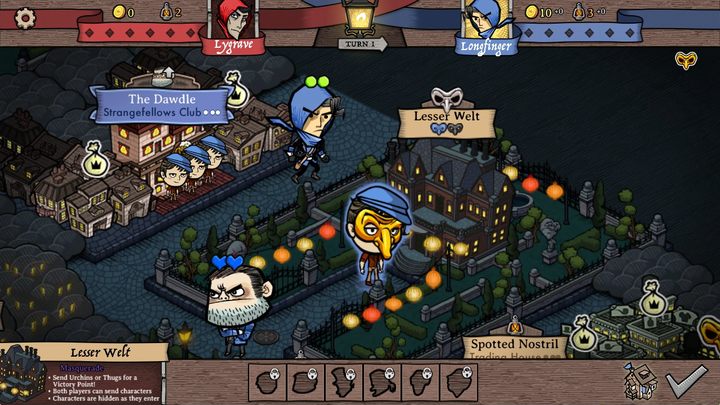 Although Antihero is an economic game, it is definitely not suitable for promoting ethical demeanor in business. As the title suggests, you play the role of a villain who is laboriously building his criminal empire.

The action of the game is set in the UK during the Victorian times, which gives the game a dense and gloomy atmosphere full of steam machines. However, this brutal and dark world has been presented in a rather grotesque way by means of a cartoonish visual design. Perhaps the artists tried to slightly soften the theme of the game by doing so. However, you can easily notice that the visual style was inspired by Darkest Dungeon.

The formation of an organized criminal group takes place in turns and mainly focuses on taking control over subsequent districts of the city. Thanks to this you are able to acquire new buildings, each of which provides unique bonuses. This, on the other hand, affects the gameplay quite strongly and can determine the further style of play. The criminal world offers a lot of opportunities in terms of criminal activities and unethical behavior. Nothing stands in the way of organizing a brutal gang of killers who prefer to use force on every occasion and kick some ass. On the other hand, you can choose a more sublime approach and instead of violence, bet on fraud and blackmail.