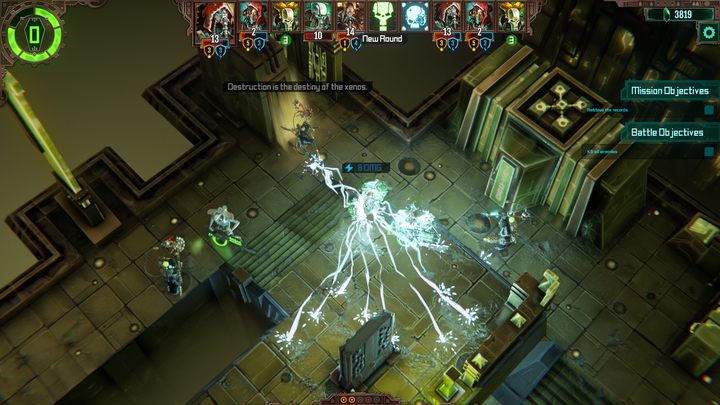 The last game on our list is a real treat for lovers of tactical gameplay. Warhammer 40,000 Mechanicus is a title set in the dark universe of the Warhammer 40,000, which doesn't focus on the adventures of heroic space marines, but on the imperial Adeptus Mechanics cult, which is much less popular.

The world of Warhammer 40,000 doesn't need to be described and it would be impossible to describe it here due to lack of space. However, it is worth mentioning that the action of the game takes place on the Silva Tenebris planet, where the mighty Magos Dominus Faustinius seeks out ancient technological artifacts. A number of missions await you there and an ancient race that will try to stop you at all costs.

You can lead the entire expedition from a powerful space warship, which provides an interface for managing individual combat teams. Each team consists of a small group of Adeptus Mechanicus units, which can be sent to various places on the planet in order to explore alien structures. This is a turn-based game and your main task is to explore all rooms available on the map. From time to time, when the appropriate meter reaches its maximum level, you will have to fight against your enemy. Tacticians will be able to try out their skills, because the game offers quite a complex combat system, based on special attributes of your units. During combat you collect data points, which can be used later to develop members of your battle teams. In addition to battles which take part in various rooms, some other special events may occur  then you have to make a difficult decision which may have a huge impact on the success of the whole mission.

Warhammer 40,000: Mechanicus has a dark atmosphere typical of this universe, which should appeal to all fans of this franchise. They should also be delighted to know that this time the story explores less popular topics of the lore instead of space marines.