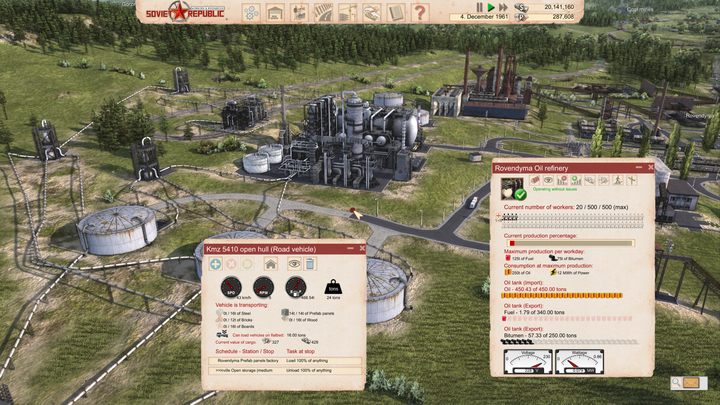 As we have already mentioned in the case of Kingdoms and Castles, every decent city builder must offer a decent quality of fundamental game mechanics of the genre and add some distinctive features to distinguish it from the competition. In the case of Workers & Resources, these specific features of the game are very uncommon.

However, let's start with the fact that the mentioned fundamental game mechanics of the genre have been implemented very well here. The game has everything what a decent city builder needs: you can construct and erect buildings, designate areas for development, manage the production chains and meet the increasing needs of your residents. What distinguishes this video game, developed by the Slovakian studio, is the unusual setting of the action  in a fictional Soviet republic.

Yes, ladies and gentlemen, Workers & Resources is some sort of a simulator of a Soviet dictator who runs and manages his communist country. So if you want to prove yourself as a manager in a centrally planned economy, then this is a perfect game for you. This won't be an easy task, as success depends on whether you can maintain a positive account balance with simultaneous and continuous investments. The constant development of economy requires, for example, a gradual increase of your residents' competences. However, in order to breed and train real Soviet engineers, it is necessary to properly plan the education system.

Therefore, you have a lot to do in the game, and its unique atmosphere is an additional advantage. I won't keep it secret that my first question associated with this title was  can I build a nuclear power plant in my fictional Soviet country? Not yet, but developers have announced that this feature will be available in the future.