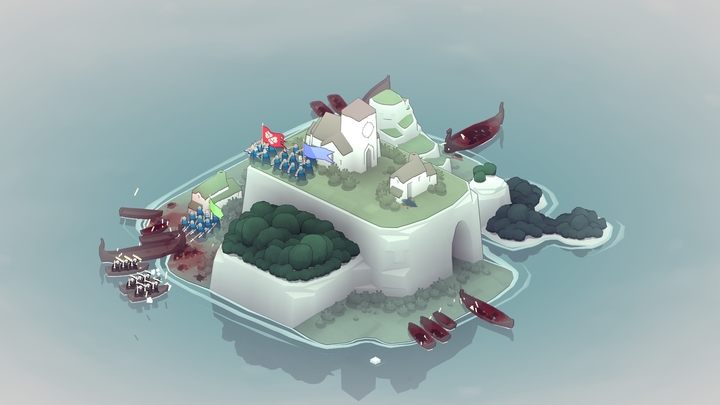 Bad North is another bizarre title on our list. This is a minimalist real-time tactical game, which combines procedurally generated islands with roguelite game mechanics. As it often turns out, the simplest ideas can offer a fantastic dose of gameplay.

In this production you play the role of a feudal ruler who, together with his warriors, tries to fight off the invasion of Vikings from the North. During the campaign, you travel across small Islands that are regularly attacked by Viking troops. Your task is to protect all buildings and settlements of the islands. The more buildings you can save, the better results you may get. This will also grant you more coins. At the same time, the effective defense of successive islands gives access to new troops, which can be improved with earned coins. You always have a maximum of four teams at your disposal, so the thoughtful development of your subordinates and the appropriate tactics (like using their best skills or the geographical shape of the island), are essential to deal with the overwhelming forces of the invaders.

Due to its simple concept and at the same time extremely addictive gameplay, Bad North is quite similar to such indie titles like FTL or Into the Breach. The game is available on almost all devices, and its special Jotunn Edition introduces a number of improvements, such as checkpoints.