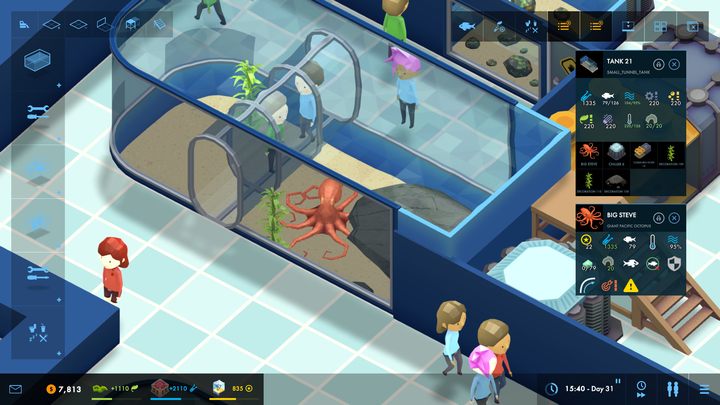 Another economic strategy from our list has a very interesting theme. Everyone who has had an aquarium knows how pleasant it is to sit down and relax in front of this small living ecosystem. Now imagine that you have dozens of aquariums, hundreds of fish species, budget problems, issues like lack of space... well, that sounds a little more like a challenge.

As you can probably guess, in Megaquarium you can manage your own aquatic theme park. You receive a number of glass water reservoirs in which you can put various species of fish. Of course, the fish can be mixed together, but this should be done skillfully, as you may accidentally create a new food chain. Space management is an interesting aspect of the game. That is because your megaquarium is usually not that large in size. Usually, you get a relatively small room with limited space in which you have to arrange your equipment in a proper way. Over time, this problem grows as more and more new devices appear during the campaign. While at the beginning of the game you only need to set up one or two aquariums, after some time you will have to manage temperature control devices, fish supplement dispensers or souvenir shops. The main premise of the game is to organize everything in such a way that customers and visitors were willing to spend as much money as possible.

However, Megaquarium is a very relaxing video game. Apart from the theme itself, the game offers a fantastic and relaxing soundtrack, which perfectly introduces players to the unique atmosphere of the title.