The open world of the 19th century

Taking a break is always a good idea, no matter how good the story is  and especially if it's as extensive as in RDR2. The entire story of the gang of Dutch Van der Linde takes place in the Rockstar rendition of the Old West, from the end of the 19th century, and it's hands-down the best setting created for any video game in history. There are snowy mountain tops, wet marshes, prairie, woods and deserts, but not even once will you feel you're in an artificial, virtual world. These are not only realistic and natural, but also stunningly beautiful. 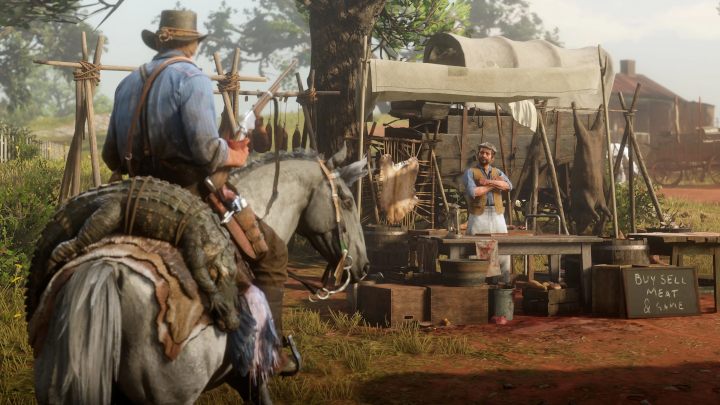 The open world in Red Dead Redemption 2 is utterly impressive. You could watch this gator here hunt for prey. If Arthur didn't hunt it first.

Moreover, the universe is teeming with life  and not only in the city of St. Denise, the only really big settlement in the game, but practically at every step. There are random encounters happening in reasonable intervals; a damsel in distress, a stray vagabond, a trapped hunter. Each NPC has its own personality, will answer us or talk back, ask why we're following them. NPCs are not just dolls with looped animations like in other games. The world is living its own life; accurate and realistic, no matter if we're looking or not. Then, we have to mention secrets and easter eggs. Strange inhabitants and places, things out of this world  hunters of secrets will have something to do. And the omnipresent, small details. A mad attention to details.

The madness of details

It all started with the sensational report stating that horse testicles shrink in sub-zero temperatures. That was just a beginning for Rockstar. The developers paid attention to things that nobody would ever though about implementing in a game, simply because nobody would even notice. Rockstar did notice  even though players are more likely to read about those on the web than find them themselves. But there are some that are really easy to notice, such as some remarks of the NPCs when they see Arthur covered in mud, corpses on the street, or blood on your clothes. About dozens of others, you will probably read somewhere and go to check out of curiosity yourself. 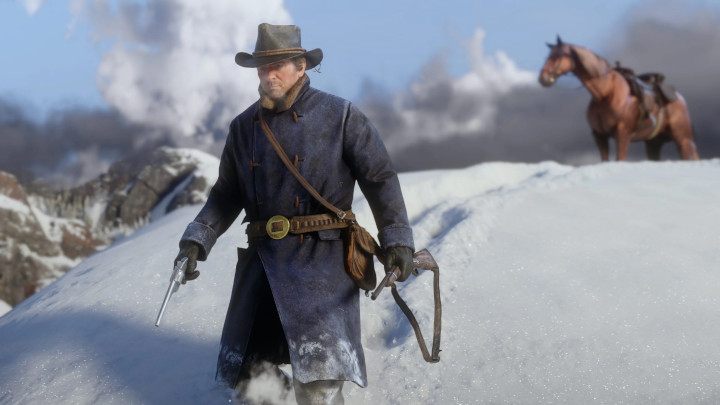 From the footprints in the snow and shrinking testicles, to patina settling on weapons. RDR2 exerts a maniacal attention to details.

What are the strangest ones? Little, cute possums play dead when they feel threatened. The hides of hunted animals have bullet holes. NPCs eat everything that's on their plate, then pick their teeth. The dirt settles under Arthur's fingernails, and the horses will be clean in places where the saddle covers their back. If you don't clean weapons, patina will start covering them. These are just a few of over a hundred morsels that you can see in the game. Even if most of them go by unnoticed, they make the world game more interesting, more realistic and natural. One worth exploring, devoting at least a few hours to.