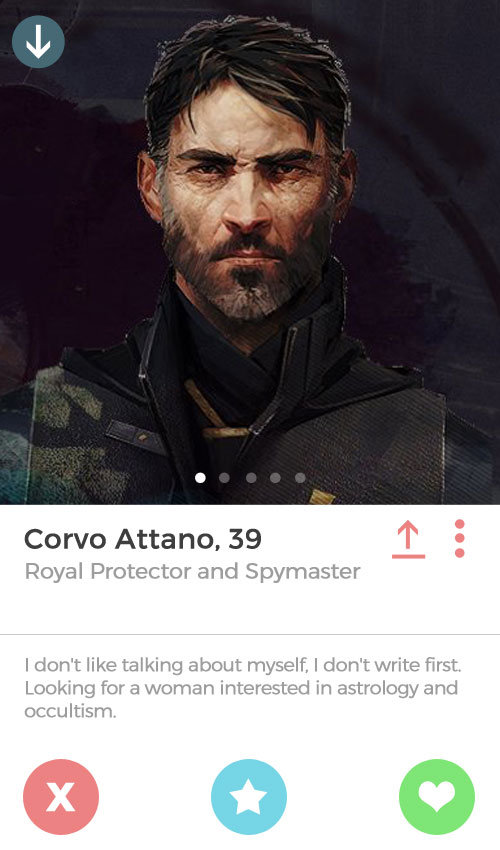 It's common knowledge that an aura of mystery can be really sexy and alluring. This is why Corvo is high on our list, although there are more important reasons. And I shall quote a sentence uttered during our brainstorm:

"Corvo wouldn't be very problematic  after all, he didn't say a single word for the entire first game!" Isn't that what us women really want? For a guy to actually LISTEN? This surreal idea becomes possible with him. And when he finally speaks  only when it is necessary  you will hear it. The voice! Well, we are in awe. He also has a rather epic name  Corvo is Latin for Raven. You just can't get more mysterious than this.

Aloof, pragmatic, and quiet, he shows his emotions only to those closest to him-after a few dates, we could join this group, perhaps. Besides, he has a really kind heart, and not even "for a killer." He feels sorry for his enemies and doesn't keep them suffering for extended periods of time, and if he can, he tries not to avoid senseless violence. Hats off! In all this dark shroud lurks a warm temper, which we will try to bring to the fore. This is a real handyman who can easily cope with any issue in the house.

The perfect date? Just take him for coffee and cookies and have him tenderly talk to you. Every woman can use that sometimes. And you can feel completely safe, Corvo can easily protect us  after all, he's been practicing martial arts since he was a kid.

Corvo knows the city like the back of his hand, so he will take you to the most interesting places, show you the best views  especially at rooftops level. In addition, he scores high for a romantic fight with the repressive regime, and since he was unfairly accused, you can easily take him to meet your grandma. But that's later  let's stay with the date for now. Ehem.

So, the question is not "if Corvo", but "which Corvo." The younger had better clothes and hair, and was a tad messy, and, as you know, a messy boy gets +10 to awesome. Corvo senior, on the other hand is: a) senior, b) grizzled, c) speaks in the voice of Stephen Russell. I guess there's no bad choice here. I mean it's not like they're two different people.

When we had a list of hotties on the board, the girls asked me which one I would choose. I'm rather conservative in the romantic dimension, but if I'd have to chose at least a bromance partner, I'd totally go for Corvo Attano. First, he keeps quite most of the time, and second, I could learn some useful tricks from him.