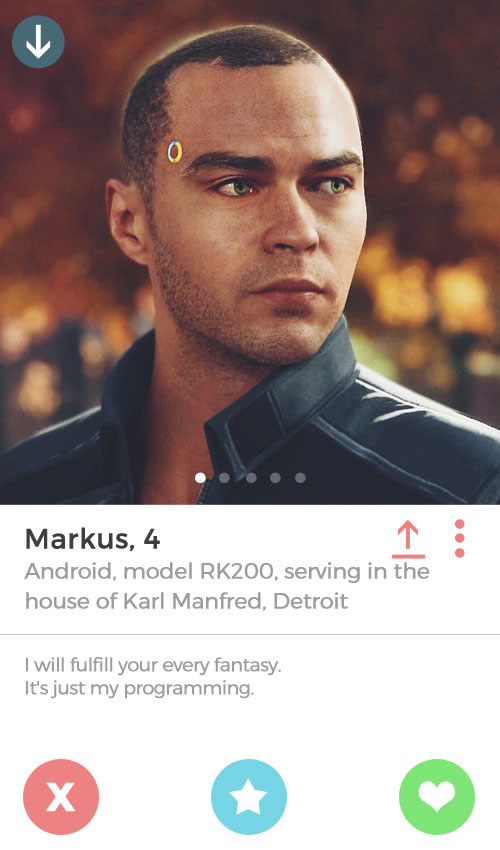 Look, the next candidate is not a human being! Detroit: Become Human focuses on the conflict between humans and machines, and the fundamental question: do androids dream of electric sheep? Marcus has shown that indeed they do  or at least that they can be lovable. Oh, they are. Very much.

When we meet him, Marcus doesn't know what's awaiting him. He's caring, calm, and focused on taking care of Carl. Over time, he turns into a charismatic, confident leader, certain of the righteousness of his cause. This gives many androids hope; having something they can believe in gives their existence a deeper meaning. This shows that even machines have the right to love and live the way they want. I think we could learn a lot from him. Besides, he's an AI. He's not only handsome, but also as smart as Wikipedia and Google combined. Sort of like Janet from The Good Place.

Marcus, in addition to his leadership abilities, is also incredibly sensitive. As a connoisseur of art (Remember the picture he drew at the beginning of the game?), he would certainly be happy to visit the museum together. And then we would take him to karaoke  he really can sing, as it turns out.

There is also one significant advantage to being with him  androids, unlike men, can be easily shut down. Did he hurt you? His babbling drives you nuts? Easy! Peace of mind is just one press of a button away. I mean it's not like he'll get offended or anything. And if he does, we can buy a newer model.

If you like impressionable, and at the same time strong men, you should definitely get on a date with Marcus. Although he's considered just a machine devoid of feelings, I see him as a human being. A beautiful rebel, a superhero fighting for the rights of minorities. What are the advantages of dating an Android? Marcus is designed to listen, so if you talk a lot and like to be listened to, this is definitely a guy for you. More importantly  no socks on the floor, and fresh flowers on demand!

Software updates should also be pretty convenient. True, Marcus isn't perfect, no one is, but I know some women whose lights would flicker at his sight.