Rocky Mountain Trophy Hunter is a hunting game where players can hunt in the mountainous areas of Alaska, Colorado and Canada. Developers from WizardWorks have taken care of the realism of hunting, including naturally behaving animals and changing weather conditions. Virtual hunters have at their disposal a varied arsenal of weapons, in which, in addition to traditional rifles, you can find, among others, an arch and a revolver.

Dig Dug is an arcade game, which was developed in 1982 by Atari. The original coin-op version was very popular, so it is not surprising that the program has been converted to home computers and consoles.

A platform game in which we play the role of the title archaeologist. The player's task is to break through four trapped stages: an Amazon temple, an Egyptian pyramid, a medieval castle and a Nazi rocket base.

Pleasant platform game designed for the youngest. Take on the role of a funny purple alien named Ed and go through 12 different levels.

Crazy Chicken in the land of pharaohs is an arcade platformer produced by the German company Phenomedia. Directing the actions of the title character, the player will comb through the remains of ancient Egyptian civilization in search of the tomb of the legendary Winged Pharaoh.

Dynamic 2D platformer, produced by independent Backstab Games studio. The player's task is to safely lead the title escapee through levels full of obstacles and traps, and at the same time collect as much gold coins as possible.

A humorous 2D platformer which is a remake of a hit from 16-bit computers. The cruel giant robbed a tribe of cavemen from food supplies. A brave Grag sets off following the thief's footsteps. In a dangerous expedition he is accompanied by an unusual companion - a fly. The game was produced by the development team of Anuman Interactive.

Intrusion 2 is a game combining elements of a dynamic shooter and platformer, reminiscent of such classics as Contra or Metal Slug. We control a soldier who has to overcome nine areas full of enemies.

A game referring to the classic formula of Space Invaders. We play the role of the pilot of a spacecraft, who must stop the invasion of foreign invaders.

A game of skill and logic, referring to the cult "Breakout". The biggest innovation is the inclusion of the Recall option, which allows you to call the ball at any time of the game.

A game where we can design our own adventure with Hugo and then join it. Offered tools allow you to prepare simple platformers. Each time we start by choosing the scenery, and then we deploy the board has interactive items and enemies.

FrogMan is a simple game representing the platformer genre, designed for the youngest computer users. The title frog - superhero - has a lot of worries. His brother was captured and is now an attraction of one of the pet shops.

The Legend of Beowulf

The Legend of Beowulf is an action adventure game for younger audiences, produced by JetDogs development studio. The production story is based on the famous Nordic myth. The player directs the actions of the title warrior, who wants to liberate the Viking people from the monster Grendel, and then, as the king of Denmark, has to face his mother. 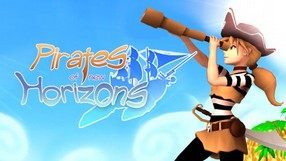 Pirates of New Horizons is an action-adventure arcade game that combines the subject matter of pirates with the realities of science fiction. All this makes up an unusual arcade game with fairy tale graphics.

Dangerous Dave in the Haunted Mansion

Dangerous Dave in the Haunted Mansion is the successor to the cycle initiated by John Romero, which was developed after the creation of id Software. All members of the company at that time - Tom Hall, Adrian Carmack, John Carmack and the originator of the original - participated in the production of the programme.