An improved edition of the 2016 ReCore, developed by Comcept in cooperation with Armature and published by Microsoft Studios. In the game, the player assumes the role of Joule Adams, who is one of the last existing humans. She was supposed to prepare the planet of Far Eden for colonization; something went wrong, however, and now she has to fight for her life with the help of a robot called Mack. ReCore: Definitive Edition gives one access to an additional adventure entitled Eye of Obsidian, in which the player can visit previously inaccessible locations with the task to fight the Obsidian cultists. The remastered edition introduces also several additional pieces of equipment for the already known machines, new adversaries, and the T8-NK robot, which initially was planned to be added to the game in form of a paid DLC. With this robot, the player can move around the sandy areas much faster. The game allows one to experience higher resolution on both Xbox One and PC, improves the balance in comparison to the original version, and introduces High Dynamic Range (HDR) support. 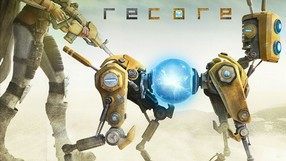 A science-fiction TPP action game that depicts a vision of mankinds future and its possible fall. The title is a joint work of Comcept  a studio that co-created MegaMan, founded by Keiji Inafune, an ex-employee of Capcom  and Armature Studio, which hires the creators of the Metroid Prime series. In Recore you play as a girl named Jewel, who is one of the last representatives of the human race. She traverses the post-apocalyptic world ruled by a faction of robots who stand against the idea of repopulating the Earth with humans. Gameplay focuses on exploration and combat, in which the protagonist can count on support from her mechanical friend called Mack. The key feature of Recore is the ability to transfer the robots core into another body, through which he gains new skills, while retaining his identity. A noteworthy thing is the dynamic environment, which is constantly changing due to sandstorms raging across the planet.