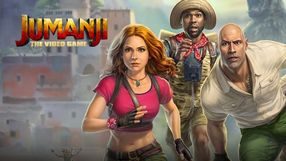 Jumanji is a family game based on the film under the same title. This cinema hit with Robin Williams in the lead role was released in 1995, based on a book by Chris Van Allsburg. Generally, the action is oriented around the title board game, which hides a mysterious power.