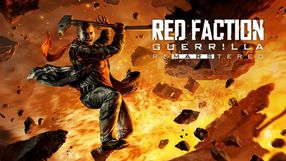 A remastered edition of Red Faction: Guerilla developed by THQ Nordic. In comparison to the original, the game features improved visuals, higher resolution, as well as more detailed textures, shadows, and lighting.

A collection of three installments of the popular series of action games developed by Volition Studios exclusively for PlayStation 3. The pack contains all major entries that were previously released on the 7th generation consoles – Red Faction: Guerilla and Red Faction: Armageddon. Both games tell completely separate stories and focus on different characters. What’s characteristic for them is that the action takes place on the surface of planet Mars that was colonized by humanity, and that the titles allow the player to destroy the environment by using weapons and other tools. Red Faction Collection also contains a multiplayer mini-game Red Faction: Battlegrounds in which the players take control of special vehicles and complete on arenas on Mars in several gameplay modes. The collection contains all previously released DLC expansions for each of the games.

A science-fiction based TPP shooter, which is the fourth installment in a popular series by Volition. The plot of Red Faction: Armageddon takes place fifty years after the events shown in the previous game. The humanity on Mars has been forced to descend to hide underground. The protagonist, Darius Mason, accidentally causes an alien race to wake up from their slumber. As it turns out, the aliens are aggressive and bloodthirsty, taking over subsequent human colonies. Our hero has to deal with the alien invasion, and at the same time, absolve himself from the accusations that he is responsible for the whole situation. When it comes to mechanics, the game departs from its predecessor, introducing a more linear structure, with more emphasis on the plot and movie-like approach to narration. Regardless, the most characteristic element of the series, the ability to lay waste to the environment using various weapons and other tools, has stayed unchanged.

A spin-off of the popular series of games developed by Volition. The title concentrates on multiplayer and it is an introduction to the next full-fledged installment of the series, Red Faction: Armageddon. In the game the player takes control of special, customized vehicles which complete with each other on the arenas of Mars in several gameplay modes such as Deathmatch, Team Deathmatch, Capture the Flag and King of the Hill. The developers added a simple single player campaign as well in which the players face artificial intelligence. The action in Red Faction: Battlegrounds is shown from a top-down perspective and the gameplay mechanics are similar to the ones used in twin-stick shooter genre. However, the game uses weapons that are typical for Red Faction: Armageddon and the television series created based on it – rocket launchers, Gauss cannon, bombs and explosives. The players can move their achievements to the main installment of the series and unlock a few interesting additions in it.

A science-fiction TPP action game, which is a third installment in a series created by Volition studio in 2001. The plot of Red Faction: Guerrilla takes place on Mars, 50 years after the events of the first part. During the gameplay, we assume the role of Alec Mason, an engineer who leads a resistance army, hoping to overthrow the tyranny of an organization called Earth Defense Force. In view of the significant dominance of the enemy, the main hope of the partisans lies in guerrilla warfare and sabotage. In comparison with previous installments of the series, the gameplay mechanics have changed immensely: the first-person perspective was changed to third person, and the game world now has an open structure. An interesting novelty is gathering scrap metal, which is a currency used to pay for new weapons. The game retains the destructive environment mechanics, known from the previous games, which are a one of the distinctive features of the multiplayer mode.

A sequel to a well-received FPS game developed by Volition. Red Faction II is set five years after the events depicted in the original game, when a civil war breaks out in the Commonwealth. The player assumes the role of Alias - an explosives expert belonging to a team of six super nanosoldiers. The protagonist joins a rebellion against Victor Sopot's totalitarian regime. In terms of mechanics, Red Faction II expands the patterns introduced in the first installment. The improved Geo-Mod engine responsible for environmental destruction is a characteristic feature of the game. What returns as well, is the opportunity to steer various vehicles, such as tanks, aircraft or submarines. When juxtaposed with the original Red Faction, the sequel brings a slightly less linear plot and the ending is dependent on the player's decisions. Apart from that, both the visuals and AI of the enemies were improved.

An action game, developed by Volition, combining the features of a classic FPS game with extensive adventure game elements. The plot of Red Faction has been set in the year 2100, and takes place on Mars. In one of the mines, a rebellion breaks out against the ruthless regime of the Ultor Corporation, and is further fueled by a virus decimating the workers. We assume the role of Parker, who becomes a member, and later the leader of the rebellion aimed at overthrowing the current state of affairs, and proceeds to reveal the secret of the plague. During the gameplay, the players have 15 types of weapons at their disposal, and the ability to control various land, air or sea vehicles. A huge asset of the game is the use of Geo-Mod, an innovative technology allowing for increased interaction with the environment and the ability to modify it by, for example, breaking through walls using explosives. The whole game is complemented by a multiplayer mode for up to 32 players.