A new version of the classic "Pikmin" item, belonging to the genre of strategy games and known from the GameCube console. Remake is part of a series of renewed hits called New Play Control.

A sequel to the humorous real-time strategy game that came out in 2005 for Nintendo GameCube. The story picks up after its predecessor and shows the subsequent events of the conflict between two fictional nations. When the commanders of the Anglo Isles find out that their enemies from the Solar Empire work on a new superweapon, they decide not to wait and strike first  and that's how the world plunges into chaos yet again.

Grotesque Tactics: Evil Heroes is a tactical RPG set in a fantasy world. We perform tasks, gain experience and treasures, save virgins from the beast's claws - all this with ironic and grotesque humour and quite pleasant graphics.

My Pokemon Ranch is a title in which the main role is played by popular Japanese creatures. The game focuses on running a Pokemon farm.

We will continue to play again the intrepid Olimar, to whom this time a helper, the tireless Louie, has been assigned. And you need to know that this time help will be indispensable.

An interesting strategic production from the tower defense sub-genre taking place in one of the worlds of Final Fantasy. We get a number of units and we have to stop the approaching waves of enemies trying to steal crystals.

Space Station Tycoon is a strategic-economic item dedicated exclusively to Wii console owners. This production, due to its subject matter, can be compared to a game called Outpost Kaloki X. In both programmes, the user assumes the role of space station manager.

A combination of a simple action game and turn-based strategy, played in the Star Trek universe. We take control of one of the six different races, striving for total domination of the galaxy.

The next installment of the popular strategy series. We control several bakeries, preparing cakes and adding new decorations to our businesses.

We build our own house, using the materials purchased in the store for this purpose. Finished property is then equipped with furniture. We play alone or with other players.

A real-time strategy that is not very demanding. We strive to protect the penguin village from predator attacks. For this purpose, we construct and skillfully deploy available defense systems.

Sakura Wars: So Long, My Love is an anime style jRPG game by RED Entertainment studio. The plot takes players to New York from the 1920s, where as a young man named Shinjiro Taiga they have to face an army of demons. The game focuses mainly on tactical fights in turn-based system.

Military Madness: Nectaris is a turn-based strategy based on the old Hudson hit. The fight in single and multiplayer mode has been enriched with new units, cooperation mode and improved graphics.

World of Zoo is a strategy game addressed mainly to young audiences, created by Blue Fang Games development studio. The player plays the role of the manager of the virtual zoo and has to take care of the comfort of its inhabitants. The game is enriched with arcade mini-games and educational materials prepared by the editorial team of National Geographic. 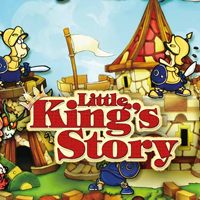 Little King's Story is a production combining elements of many species. The player takes on the role of a young king, who must transform his nation into a powerful empire. It was realized in the form of an RTS with an extensive economic aspect.

A strategy and logic game in which we play the role of a vet. We treat lions, hyenas, zebras and kangaroos. Most problems are solved by playing simple mini-games.

Thrillville: Off the Rails (Wii)

The second part of the popular economic strategy. Again we are creating our own amusement park. It is worth mentioning the presence of more than twenty extended mountain railways.

We play the role of a vet and open a medical point in the middle of the wilderness. We restore the full health of the animals appearing in the clinic, using the available tools of a physician.