Order of Battle: World War II is a classic turn-based strategy set during WWII, and a debut game by a studio from Luxemburg, called The Aristocrats. The game was initially supposed to be released as a standalone title called Order of Battle: Pacific, but around a year into the production it was decided that it should become a free-to-play game – on the same occasion, the title has been changed. The title combines old-school mechanics, based on games such as Panzer General, with modern 3D graphics. The gameplay is conducted in a turn-based system on typical hexagons. The game, along with its expansions, provides hundreds of units with unique specialties, realistic yet approachable support system and a plethora of legendary commanders providing different bonuses for their armies. In the base version of the game, there is one training camp, serving as a tutorial, and one scenario from each available DLC.

A science-fiction tactical turn-based strategy game and a virtual adaptation of a board game. Legions of Steel is set in the far future, in which the allied forces of The League of Aliens and the United Nations of Earth face rebellious robots. Although the battles go on across almost all of the universe, the most important front is an underground tunnel network, where the enemy's machine-building conveyors are located. Legions of Steel features two independent story campaigns, which you can play in the single player mode or the multiplayer mode. Each of the sides in the war has different units, which in turn have unique characteristics, weapons, and combat abilities. The gameplay is turn-based and utilizes a classic bird's eye view, which gives it an oldschool feel. The visuals of Legions of Steel are based on the original board game art with 3D models. You can play the game on your own or with a fellow player in the hot-seat or asynchronous PBEM++ mode. 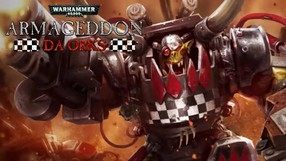 A standalone expansion to turn-based strategy game set in the Warhammer 40,000 universe from the duo of The Lordz Games Studio and Flashback Games. It takes place at the end of 40th millennium, when a derelict ship is discovered in a system of the planet Armageddon. When humans attempt to investigate the wreck, it turns out to be a ruse of Orks, who plan to start the biggest offensive on the Empire of Man yet and end humans once and for all. We play as a warboss of Orks, Ghazghkull Thraka, known from the original board game, leading his forces against Space Marines and Armageddon Steel Legion in various locations – from open space to cities. Warhammer 40,000: Armageddon - Da Orks offers new dynamic campaign consisting of 18 missions and complements it with base game’s multiplayer through PBEM++. Players can choose from over 400 new units, equipped with 200 different kinds of weapons.

A turn-based strategy developed by Byzantine Games and The Lordz Games Studio. The game takes the players to 16th and 17th century Europe, an age when melee weaponry began to be slowly replaced by firearms. We can take part in three conflicts: Italian Wars, Thirty Years’ War, or the English Civil War. In all, we are given 10 historical battles, in which we control forces the size of a battalion and larger. Each battlefield was recreated using historical sources, while the available units correspond to real banners from that era. The key to success is to employ adequate tactics for each encounter, while the decisions made by the players have an utmost influence over the whole continent. The game offers five difficulty levels and a PBEM multiplayer mode. The visual side was based on the authentic battle scenes from the era.

A turn-based recreation of the battle of Gettysburg, one of the most important and bloody battles of the American Civil War. Gettysburg: The Tide Turns offers a number of scenarios, building an extensive campaign which allows the players to control the forces of the North, as well as the Confederacy. Our job is to conduct turn-based battles on the hexagonal grid covering the maps. The battles are large in scale, with the player controlling whole divisions of troops. The game contains an interesting feature – randomized turns. The order of turns is not fixed, while the engine decides which of the units are capable of making a move in the given turn. The Tide Turns is a highly complex title, characterized by historical consistency. The battles employ real units, while the course of each encounter is influenced by landform or soldiers’ morale.