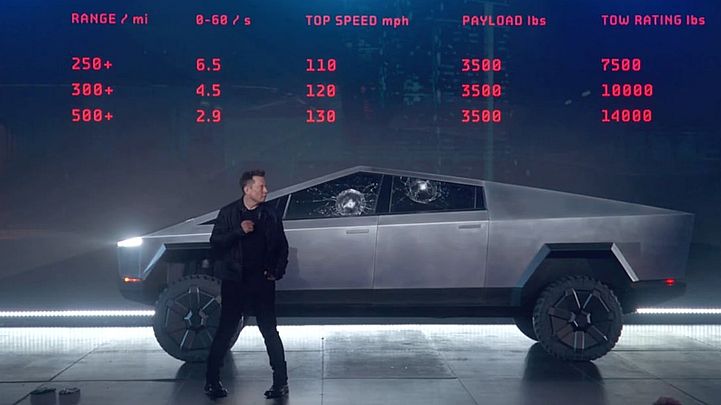 The vehicle even has statistics that resemble the HUD used in CP2077. A coincidence?

Elon Musk has just presented the latest Tesla model - Cybertruck, to the world. The car is unique and its main features can be described in one sentence - 'the usefulness of a truck and the performance of a sports car'. However, its design has already become a controversy and caused a serious bone of contention over the Internet. The car looks as if it was directly taken out of the Cyberpunk 2077 commercial, but it couldn't go unnoticed by the game designers who commented on Elon Musk's post on Twitter. He even found a moment to reply. Check for yourself.

There would be nothing unusual about it, but the topic was picked up by Radek Adam Grabowski, the main PR manager of CD Projekt RED, who shared the whole story on his profile. Maybe these minor actions could mean a lot more than just a blink of an eye to the fans? We will probably know this only on the day of game's release. Personally, I would not be offended by the small easter egg associated with the new Tesla. For example, a quest with a truck similar to the one in Saints Row, but taking place in the Night City instead. As a reward for completing the task, the player would receive a Cybertruck skin... (or a vehicle?)

We wouldn't be a self-respecting gaming site if we didn't ask the representatives of CD Projekt RED about the whole situation. The answer was swift and short: "We won't comment on that case."

CD Projekt RED is currently being flooded with questions from editors and fans from all over the world. There's only one problem. If the new Tesla would appear in Cyberpunk, then Elon Musk has to do something about bulletproof glass. Otherwise it will not receive a certificate of quality in Night City! Recall that Cyberpunk 2077 will hit the shelves on April 16, 2020. The title will debut on PC, Xbox One and PlayStation 4.