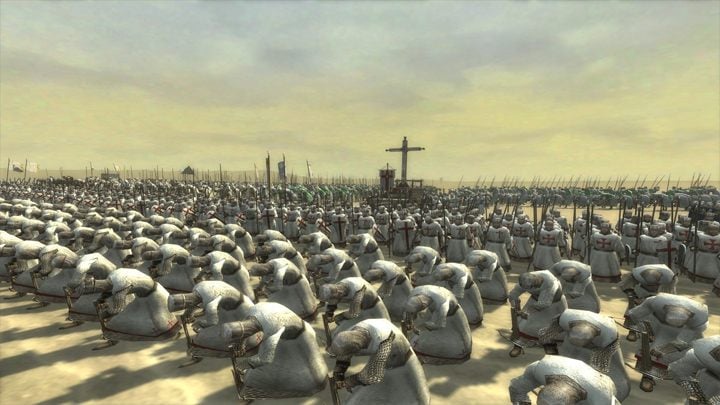 A combination of bug fixes, many small mods, better AI and AI armies, more provinces, graphical improvements and many other campaign and battle map changes. The whole game offers now a much greater challenge!

Added a new region below Kiev (Ireland is now 2 regions).

AI factions tend to stick to their Royal Blood for many generations.

Knight's Templar & Kingdom of Jerusalem have been combined into Crusader States (with mixed units).

Slave faction are now a lot more active - including the ability to use merchants, spies and assassins.

Completely new and huge campaign map, covering most of Europe and the beginning of Persia.

Mountains, hills and map outlines are based on satellite data.

Work of art coastlines instead of the square 'vanilla' ones.

Every Region has its own resources, including new valuable resources in the "outbacks" of the map

Resources are now better balanced, a couple of new resources were also added.

All resources were moved away from roads, to ensure merchants' peaceful life.

AI friendly map, the AIs' armies should no longer get stuck.

Narrow mountain passages were widened enough for agents to freely pass, while armies will still get blocked.

For God and St. George mods by AWellesley.

As merchants get older, they lose movement points.

Generals are now a lot easier to educate in settlements with schools etc.

Faction Leaders can now acquire a set of traits affecting all settlements and generals.

Auto border-less mode - ALT+TAB in and out of the game without any loading.

All factions accessible in custom battle and hotseat.

External launcher application - taking care of things the user would normally do.

CBUR with most of its features implemented.

Unbelievable amount of fixes, both big and small, too many to mention them all.