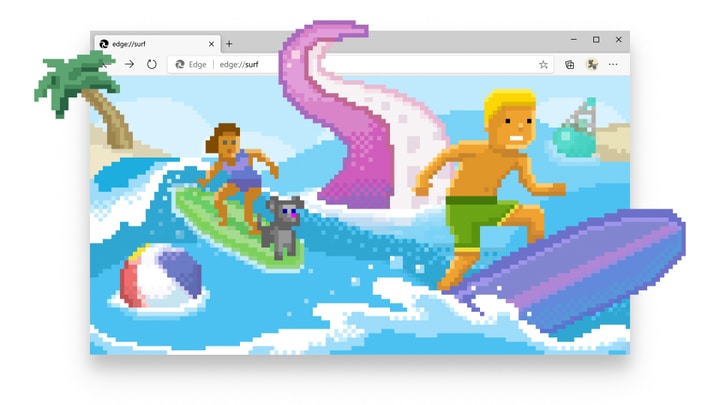 Edge has lived to see an official version of Surf Game.

In February this year, Microsoft ran the beta tests Surf Game. The title was officially implemented in the 83.0.478.37 update. To play Microsoft's mini-game, we have to enter edge://surf/ in the address bar. If we are offline, the browser itself will show us a link to the address.

The game is a competitor to T-Rex, which we know from Google Chrome browser. However, apart from the possibility of offline gameplay, which is the main element of both mini-games, the titles are very different. T-Rex is a simple platformer, where our only goal is to push forward and avoid obstacles, without any additional features. Surf Game, on the other hand, offers as many as three gameplay modes, and in addition to the keyboard, we can use a mouse, gamepads or touch screens.

The game is based on an older title called SkiFree. We can choose our surfer and then decide on one of three available modes - regular surfing, time surfing and slalom mode. In the game we avoid obstacles, run away from opponents, collect power-ups and pump up our score. Surf Game has a colorful, pixel-like visuals that looks much better than those of T-Rex. However, the latter has already become an iconic browser easter-egg.

Edge currently runs on Chromium engine and has more and more users. The game will probably not attract new people to Microsoft's browser, but the very fact of its implementation indicates that the company is trying to improve it. Won't the giant's actions be in vain? Time will tell.