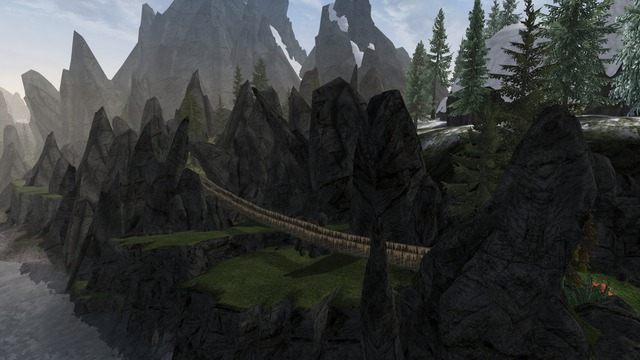 Morrowind Rebirth is a mod for The Elder Scrolls III: Morrowind, created by Rebirth Team.

Explore the island of Vvardenfell as you never have before, with a world built anew to be both alien and familiar to the Morrowind you knew before. New adventures await, with new exciting areas to see and explore, and new artifacts just waiting to be discovered.

This is a complete overhaul for Morrowind, adding countless new details, weapons, armors and much more for you to see and do. Experience the world of Morrowind in a new light, try out Morrowind Rebirth today!

Morrowind Rebirth is a massive mod with a ton of new features. Down below you can view some of these, but it's only through gameplay that you'll have a chance to fully discover what Rebirth has to offer.

-Almost all cities have recieved massive tweaks including new layouts, houses, shops and other places of interest.

-Massive landscape changes including an effort to eliminate all texture seams and floaters throughout the world.

-New rocks and trees for all regions in Vvardenfell.

-More than 20 new creatures such as the Frost Monarch, Ash Scorpion and Swamp Scrib seamlessly integrated into the game through leveled-lists.

-Most creatures have recieved new spells/resists and have had tweaks to levels, health, magicka and other variables.

-Removed reflect from most creatures, as the effect was way too common in Morrowind and its expansions.

-Blighted creatures have recieved unique textures to set them appart from their normal counterparts.

-More than 100 pieces of new armor, weapons and clothing including additions to sets already present in Morrowind, but also new artifacts and enchanted gear.

-Tweaks to values, durability, armor rating and other variables.

-The magnitude, duration and area of effect of all spells have been tweaked to provide the player with more useful options in combat.

-All of the old starting spells have been removed in favor of new ones that are cheap to cast, while still being effective.

-New spells and variation of vanilla spells have been added to NPCs and vendors.

-Some spell-effects can no longer be used for spellmaking (Fortify Skill, Fortify Attribute, Drain Health)

-Player made potions are now 50 % less valueable compared to vanilla.

-Only uniquely named enemies will have soul values high enough to be used for constant effect enchantments (with Dremora Lord of Divinity being the only exception).

-Summoned creatures now have 50 % of the soul value compared to vanilla counterpats.

-Grand soul gems are now limited, and does not appear as random loot.

-Blank scrolls in various qualities can now be bought from enchanters.

-Soul gems in various qualities can now be bought from enchanters.

-The cost of creating enchantments have been drastically reduced.

-The recharge-rate of enchantments have been reduced by 50 % +.

-Some spell-effects can no longer be used for enchanting (Fortify Skill, Fortify Attribute, Drain Health, Invisibility).

-There's now a 50 % chance that you can recover projectiles such as arrows and bolts after combat.

-Fire, Shock, Frost and Lightning-shields now damages opponents that gets too close to the "bubble".

-Jumping from great hights will now either kill the player or cause a lot of damage.

-Using trainers for increasing skills is now much more costly.

-Camp fires and other sources of heat will now cause damage.

-Shops, city gates and other places closes at night.

-Tweaks to almost all birthsigns to make them either more useful or less powerful. Previously most players used either the Lady or the Atronach.

-Most containers contain less valuebles such as gold, gems and other valueble items.

-Low level creatures such as netches now spawn at level 1.

-Deadra no longer spawn in the Grazelands.

-Included is the largest and most up-to-date collection of mesh replacers, some which are only available in this modification.

-Artifacts and magical gear of great power is now either guarded, put in locked containers or protected by traps.

-Bounty Hunters will attack you if your bounty reaches a certain threshhold.

-Campfire kits and bedrolls are now available at selected traders.

-Mercenaries for hire now roam the streets of all major cities.

-New musical tracks suitable for both battle and exploration (optional)

-New textures for the Bitter Coast and the West Gash.

-You need the US/UK version of the game.

-This mod requires the expansion packs.

First make sure that you have the Morrowind Code Patch installed prior to installing Morrowind Rebirth (This does not apply if using OpenMW). When installed open the Morrowind Code Patch program and tick the box "Bump/reflect map local lightning" in the visuals tab and the boxes Allow scroll enchant price modifier and "Separate axe inventory sounds" in the mod specific tab. Don't forget to press the Apply choosen patches-button afterwards. After having that sorted out proceed with the steps below:

Copy the "Data Files" folder and paste it to one of the locations shown down below (regular or steam). The latter won't apply if you have Morrowind installed elsewhere:

That should be it. Dont forget to tick the box Morrowind Rebirth [Main]" and any other eso or esm that you want to use in Data Files on the start-up menu. Start a New Game in order to avoid dirty saves (or repair your old save-game using Wrye Mash). If you're using MGE or MGE XE, don't forget to re-run distant land to avoid potential landscape issues (see below). As for distant land I recommend a draw distance of maximum 8 cells.