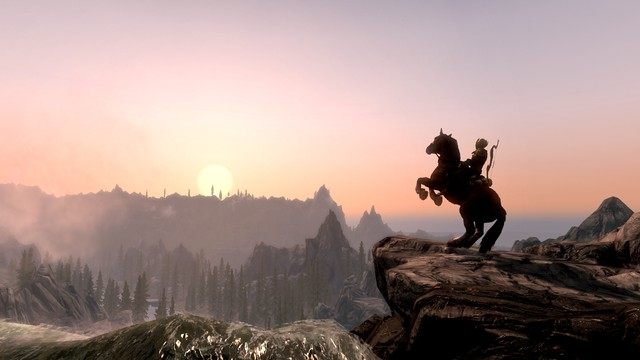 Falskaar is a mod for The Elder Scrolls V: Skyrim created by AlexanderJVelicky. It introduces a new big campaign.

The story: For the last 600 years Falskaar has been inhabited by the Nords, though most of its history from before then is unknown. For the first time since the party's arrival in Falskaar almost 600 years ago, a portal activates deep within the ruins of Mzubthand, and the player steps through, arriving in Falskaar. They are denoted 'The Traveler', based on an old prophecy: "They who arrive through the shimmering wall, mark the start of the worst."

Falskaar is a new lands mod that adds an entirely new worldspace to the world. It's accessed by a dungeon the first time, then by boat from then on out. Falskaar's goal was to sharpen my skills in almost all areas around the board, with a focus in level and dungeon design. The result is that there is at least a little bit of everything. There is a new land, places, people, quests, dungeons and more for the player to experience. It adds roughly 20+ hours of content, and favors all types of characters.

Not all quests in this mod blatantly hold your hand. If you seem to be stuck, look around and think through the quest. All quests were rigorously tested for complete-ability, so it's more likely than not that you just have to figure it out without a blatant quest marker telling you what to do.

What does Falskaar require?

To install Falskaar simply extract all items in the archive into your Skyrim/Data folder. The archive should contain 4 items, "Falskaar.esm", "Falskaar.bsa", "Video/Falskaar_Intro.bik", and "Video/Falskaar_Outro.bik". Place Falskaar.esm in your load order above all ESP files, as close to the DLC as possible. (So close to the top) Exact order may not matter, as Falskaar shouldn't conflict with many things, but it should be near the top as other mods may later edit Falskaar.

*You may also install with a mod manager, like NMM. This will work just fine, manual installation is not required.