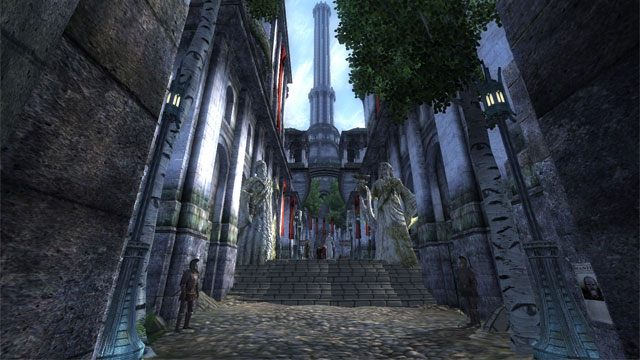 Better Cities is a mod for The Elder Scrolls IV: Oblivion, created by Max Ischreyt.

Better Cities is modular, so you can choose which cities to have in your game and which to leave out. If you want all the Better Cities, there is a merged plugin of all of them. You can also choose to toggle each city (except the Imperial City) into Open Better Cities, so that the cities can be entered without load screens (so in some places you can go under or over the walls).

This mod changes the layout of each of the Cities/Districts mentioned above.

* Many new buildings throughout the Imperial City.

* The Arboretum is turned into a luxurious garden with some domesticated deer and rabbits, a beautiful pond in front of a new hotel with a bar, bedrooms, public and private bath.

* In the Imperial Market District, the buildings have been elevated and several towers have been placed. Some ancient Ayleid statues, uncovered from recent digging under the city have been placed in the District for the population's admiration. New housing has been built and the passages are now narrow and less bare than before.

* Out on the Waterfront, the poor area has been enlarged, with more buildings and additional occupants. The ground is littered with rubbish, the graveyard has enlarged and includes a church. More ships are docked, and a courier service has opened in the richer area.

* The Arcane University District includes several new towers, plus some raised platforms and magical equipment for the students to practice what they have been taught.

* The other IC Districts have been more subtly changed. The additions are less noticeable, but still enhance the appearance of each location.

* In Chorrol the castle gets elevated and protected by walls, an old prison is now accessible and several new houses have been installed. The general layout is vastly changed. Optionally, the city can be converted into Open Better Cities, but this is disabled by default.

* In Bravil, the aspect of decay has been vastly enhanced and you will understand why this city is called the slump of Cyrodiil. The city contains now several levels of houses with pathways making it a real maze.

* In Leyawiin, the castle surrounding has been flooded but a wood pathway has been built for the guard patrols. The old/poor quarter looks mouldy and really poor. A new harbour has been built, a ship of the Imperial Navy is currently docked there.

* In Skingrad, the city has been made more floral and the Colovian District has been enhanced. New houses have also been built. Optionally, the city can be converted into Open Better Cities, but this is disabled by default.

* In Anvil, new houses have been built, the central place has been redecorated as well as the little lake surround. The Anvil Bay has also been altered to give more life to the place. Optionally, the city can be converted into Open Better Cities, but this is disabled by default.

* In Bruma, the city has been enhanced with a pond and waterfall, and the poor quarter has expanded. Optionally, the city can be converted into Open Better Cities, but this is disabled by default.

* In Cheydinhal, the general layout has been changed and the city has been made more floral. A prison quarter also has been added as well as some new houses. Optionally, the city can be converted into Open Better Cities, but this is disabled by default.