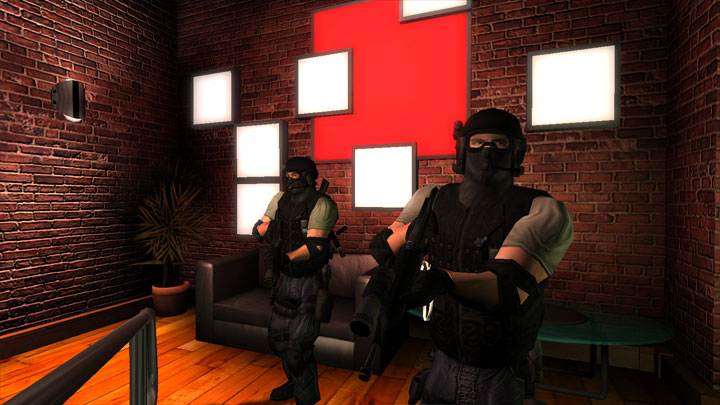 SWAT: Back To Los Angeles is a mod for SWAT 4: The Stetchkov Syndicate, created by EFdee. The mod has it’s own Discord where you can ask for help and look for people to play with.

Description (in author’s own words)

SWAT 3 is one of the most known tactical shooters of all time, it had an amazing atmosphere and AI for a 1999 game. Although SWAT 4 was an amazing game, it wasn't as good as SWAT 3 in some aspects. SWAT Elite Force is the only way nowadays to play SWAT 4 and since it's source code is released to the public, talented modders have been working on their own visions for the game. This is my vision and, perhaps, you will find it a more appealing way to play SEF...

-More than 40 new weapon variants and at least 5 new weapons to choose from, these have been carefully implemented with realistic weight values to keep things as realistic as possible. Variants go from Aimpoint Only, Suppressor Only and Aimpoint + Suppressor. Some primary weapons now can be equipped on the secondary slot aswell. New weapon category (Battle Rifles) has been added to make them easier to navigate.

-More than 30 new pieces of protective equipment to choose from, Helmets weight, bulk and protection level has been carefully revised to be as realistic as possible. 3 main helmets to choose from (PASGT IIIA, Pro-Tec Half Cut, PASGT III) and some special headgear options as well (GP-5, S10, AC900 + S10, No Helmet, Ball-Cap and Boonie Hats). Headgear has at least 5 variants per helmet type to choose from that go from Goggles, Gas Masks to Night Vision Goggles. Do note that some headgear won't be available on Singleplayer. Bodyarmor has been revised aswell, now every type of body armor can be shredded instead of only Ceramic Plates. Every bodyarmor type has 8 variants to choose from to allow more customization for the user, they go from Rolled-Up sleeves to even a Casual outfit, these come with an option to not wear balaclavas.

-Grenades have been improved, CS Gas now last a lot longer and it's cloud it's much more restrictive so you will have to be careful at clearing rooms with CS Gas in them. Flashbangs aren't as lethal as before, and won't stun you as much as before. Grenades may come in x5 packs to choose from. Lightsticks now are actually useful, they have a much larger radius and last a lot longer, also now you will be able to carry 20 of them instead of 10.

-Gameplay has been taken up a step further, apart from the new equipment, gameplay is now much more dynamic: Secondary weapons are deployed a lot faster so now going to your pistol is a much better idea, Primary weapons are holstered faster too. Tactical aids, as secondary weapons, are equipped a lot faster to allow you to breach and clear more effectively. Movement speed has been adjusted to make more sense, before, every type of body armor had the same movement speed, now choosing a Tactical Load Bearing Vest (No Armor) instead of Kevlar makes much more sense. Leaning has been improved, now it's a lot faster and you won't expose yourself as much. One-In-Chamber mechanic has been added, now clip based weapons benefit from tactical reloads. Penalty system has been improved, now Unauthorized use of force has been removed for good to prevent some unfair penalties from happening, Unauthorized use of deadly force has been kept tho. Also an unfair penalty has been removed (Failed to apprehend a fleeing suspect), this penalty happened on Fresnal St. Station and if you spawned on the secondary entry, it would make it a pita to not trigger this penalty. Evidence secured has been removed to prevent you from picking up weapons and drugs, this is Trailers job, not SWAT. Enemy Archetypes have been improved to make more sense, also, due to a new feature introduced in SEF v7.1 that affects target identification, you may encounter some suspects with concealed weapons and AI won't be able to tell if they are civilians or badguys.

- Sound Effects have been improved, now every weapon has a distinct sound (also for suppressed variants), shell casings, explosions, footsteps, foley and more has been improved. Now sounds will have a realistic AI Sound radius so you will have to be careful with every movement you make, sounds like shell casings, Optiwand, picking locks, and much more now can trigger AI Investigation.

This is a standalone mod. You don’t need to install SEF first.