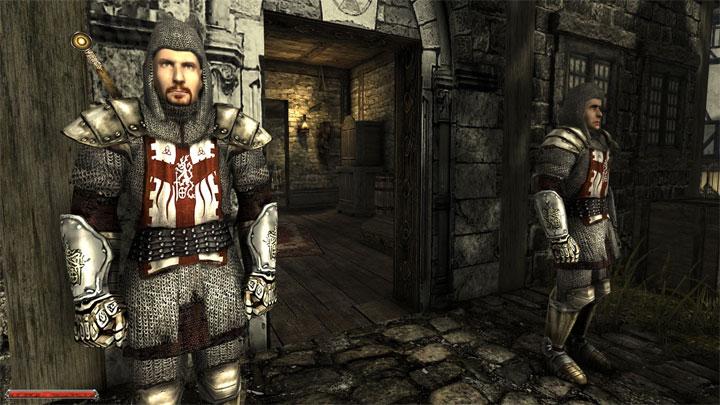 Gothic II: Gold Remaster is a mod for Gothic II - The Night of the Raven, created by Marco Marwin.

The project is based on content from the L'Hiver Edition of unknown111, revised worlds and textures from the High Vegetation Mod by felsenschmied and further texture packs from Artemiano, LordRiisis/Merlin, Vurt and Bentraxx. Without the individual works of these developers, the project would not exist in this form.

From all the individual packages, the most authentic and suitable objects and textures were selected and a variety of detail corrections were made. The package also contains new and upscaled textures as well as various adjustments and bug fixes - always with the claim to maintain the recognition effect of Gothic II and to intensify the atmosphere through higher detail and an overall fancier game world. The balancing and gameplay correspond to the original.

Essentially, the following edits have been made:

1) In addition to the compilation of objects or meshes from all mentioned modifications, the most suitable and beautiful textures from the texture packages of Artemiano, LordRiisis/Merlin, unknown111, Vurt and felsenschmied have been combined into a new, independent package and graphically adapted to each other through new transition textures, exposure adjustments and color corrections. In some cases, optimized original textures are also used.

2) Many textures for paths, floors, roofs and walls have been reworked so that their constant repetition in the game is less noticeable and they fit better into their environment. The flora has also been graphically adapted so that, in contrast to the High Vegetation Mod, it looks even more natural and thus harmonizes better with the game world.

3) In some cases, completely new textures have been implemented - especially in the addon world. The inventory and menu of the game have also received a graphical facelift.

4) Many of the textures used have been optimized with a modern A.I. image upscaler and individually sharpened. Thus, monsters as well as faces and armor of the NPCs appear much more detailed - without alienating them. In addition to better polygon models and textures, all NPCs have received a correction of the partially asymmetrical eye area.

5) The seawater in Gothic II has been replaced by an elaborately animated water texture from the HD Mod by Bentraxx for the game Thief 2 - The Metal Age. This means that the water now looks much more appealing even with the original renderer in Gothic II. Since version 1.2 the more beautiful waterfalls from the L'Hiver Edition also find their way into the modification in a further optimized form.

6) The Gold Remaster also contains many bug fixes in the game worlds compared to the original and the High Vegetation Mod by felsenschmied. Incorrect objects and textures have been removed or corrected. The vegetation has been optimised, too. The problem that running through snow in the mine valley does not produce any step noise has also been fixed using SFX script adjustments.

You need the original game incl. the addon The Night of the Raven in the official last version. Install following tools in the order listed, if you haven't already done so:

Finally, run the Gold Remaster setup and select your Gothic II game directory. The modification is compatible with all game languages and can be run after finishing the installation via GothicStarter.exe (located in the system folder of Gothic II).

Since version 1.2 it is also possible to use the Gold Remaster as a simple graphics patch for other modifications or the main game without adapted worlds. To do this, just rename the file Remaster_Graphics.mod to Remaster_Graphics.vdf in the folder ...\Data\ModVDF and move this file to the ...\Data folder of Gothic II.

In case of problems with the animation of water textures:

Open the Gothic.ini in the system folder of the game with a text editor, search for the entry zTexCacheSizeMaxBytes and increase the default value to 500.000.000 (without points). Subsequently, water animations should run flawlessly.