It is safe to say that the world has recently entered the NFT era. We hear about tokens more and more often in the subject of games and the slowly developing play-to-earn genre, the influencer industry and cryptocurrencies, from which the NFT originates.

For the sake of clarity, I will try to explain this term in the most understandable way. The abbreviation contains a slightly longer name: "Non-fungible token," or "non-exchangeable token." What does that mean? Every item that includes such a token becomes impossible to counterfeit. What "items" are we talking about? Simply – any digital file. Most often it will be graphics. NFT tokens can also confirm the authenticity of items in games, e.g. skins, trading cards, such quite popular as Pokemon cards. There's really no constraints as to what type of digital file can be backed by an NFT.

However, it's worth clearing one thing out. If we convert a graphic file to NFT, it can still be simply copied and saved to disk as .jpg, or uploaded to the web. It will simply not be assigned a digital proof of authenticity tracked by the blockchain network.

How non-exchangeable tokens compare to cryptocurrencies – what connects both technologies is the blockchain. In the simplest sense, blockchain is a sequence of data items that carry information about the items directly before and after them. Any attempt to change something in the middle of the chain will affect all the other links, leaving a trace. Each "transaction" is therefore tracked by a distributed network, which is to eliminate the need for centralized process control – and fraud.

Now that we have explained what "Non-fungible tokens" are, it's time to list 10 most expensive NFTs that have been sold in the world so far. For all you lazy dudes, I also present a table of contents below, in case you only want to read the most expensive item.

The most expensive NFT tokens | TOP 10 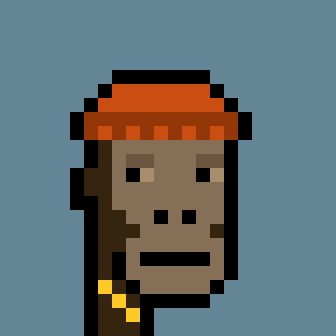 5217 is a CryptoPunk monkey and ranks 34th in terms of rarity of images from this series. Only 24 monkey punks have been generated.

The ranking is opened by a representative of CryptoPunks, 10 thousand of which have been created in total, and as you can easily guess – each of them has an NFT token. Where did the punks come from? The idea of creating these 8-bit, pixel images came from the company called Larva Labs in 2017, established by two Canadians – John Watkinson and Matt Hall.

At the beginning, CryptoPunks were just an experiment combining art and NFT tokens. As it turned out, however, the pixel images quickly gained popularity and now their prices (in Ethereum currency) are reaching surprisingly high values. 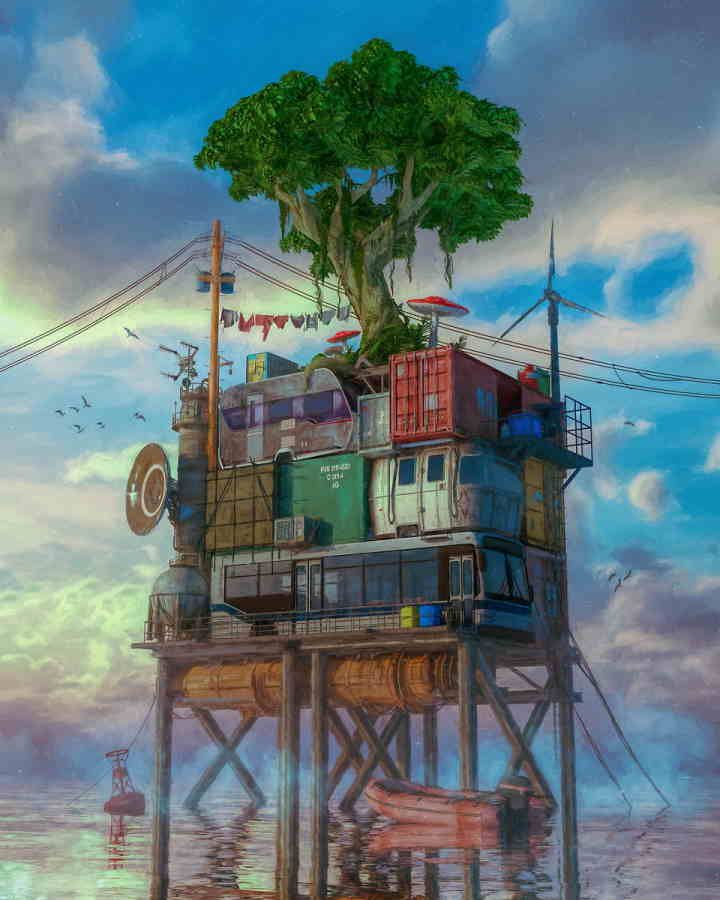 Admittedly, there's something intriguing and somewhat disturbing about this piece of art when you think of it as a picture of our planet in the future.

Beeple is the pseudonym of the American artist Michael Winkelmann, who's professionally involved in the creation of digital graphics and animation. Ocean Front is a work from one of the Winkelmann collections that can be found on his website under the Everydays tab. The picture was intended to draw attention to the issue of anthropological climate change and its impact on the environment, and the amount that Justin Sun paid for Ocean Front a few months ago was donated in full to The Open Earth Foundation.

XCopy is a British artist whose works can be safely considered one of the definitions of abstraction. All the graphics created by the artist are kept in very contrasting colors, which, combined with a rather chaotic and almost childish line, can make you shiver. What's more, XCopy doesn't just create ordinary, static images – his output also includes many gifs. And A Coin for the Ferryman is a gif, which in November 2021 was sold for 1,330 Ethereum, just over 6 million dollars. It is interesting that the gif has been waiting for a buyer for over 3 years, as the the one-of-a-kind graphic image was created in April 2018.

Another work from Beeple, this time an animation. However, the deeper meaning of both the Ocean Front and Crossroad remains unchanged. The looped animation shows people passing a huge body lying on the grass, with insults written all over it, a clown icon appearing, and a blue bird chirping, similar to a Twitter notification. Pretty telling. 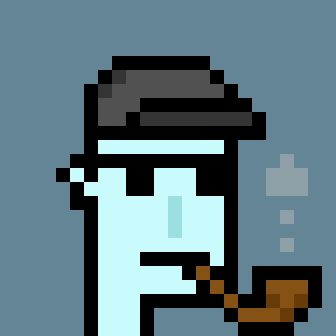 Another CryptoPunk lands in the sixth place. What makes this Punk unique, of course apart from having a unique NFT token, is also the race. 7804 is one of nine aliens generated in the entire CryptoPunk collection. In addition, it also smokes a pipe, wears dark glasses and a hat – it just looks cool as ice. Enough for over seven million dollars? We're not judging. 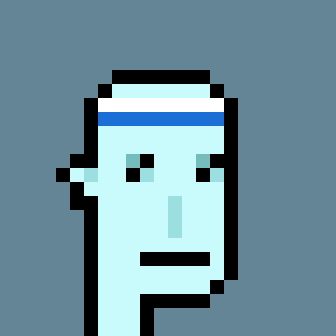 The top five of the most expensive NFTs are opened by the penultimate CryptoPunk in this ranking – number 3100. Again, we're dealing with an alien, although this time a bit scantily dressed, because he only has a sports headband. This Punk is also one of the nine alien punks. As trivia, we can also mention that this Punk was sold just a day after Punk #7804. 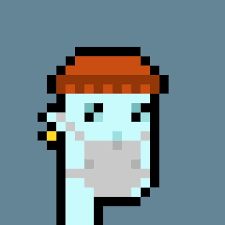 The last Punk in this ranking raises the bar to a price of nearly $12 million, which puts it not only at the 4th place of the most expensive NFTs in the world, but also makes it the most expensive CryptoPunk sold so far. Wading further into the uniqueness of this 8-bit creature, it's also worth mentioning that it is the rarest punk from the entire collection. When it comes to alien clothing, this time we are dealing with a protective mask, a hat and a pierced ear.

Another work by Beeple is opening the podium. This time, however, we're dealing with something more than just an ordinary picture or animation. Winkelmann decided to blur the line between digital graphics and a physical work of art. Human One consists of 4 LED screens with a resolution of 16K, which display a looped animation of a man dressed in a suit resembling an astronaut's. The character travels through various locations. The screens, on the other hand, are framed with polished aluminum and mahogany wood.

In the context of Human One, it's worth mentioning that in the future, Winkelmann plans to change the backgrounds that the human is displayed against. This simply means than the current owner of this NFT, Ryan Zurrer, may witness the evolution of the image. 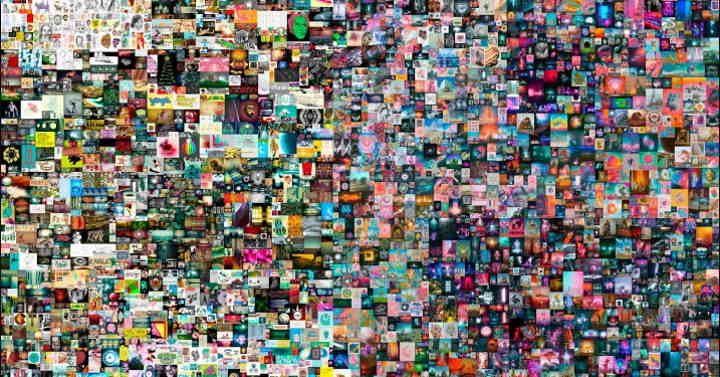 Beeple's last work on this list is a collection of all of Beeple's works created as part of the Everydays initiative. It's a resolution Winkelmann made in 2007, and since then, he has been implementing one painting every day, for 5,000 days. The second most expensive NFT in the world is a collection of all his works. It must be admitted that the artist's effort was not wasted – after all, 15 years of his work brought him a profit of nearly 70 million dollars.

This is how the work looks like from a distance. If you want to see how the collection of Beeple's works looks in detail, you can do it on this page.

The king of the most expensive NFTs in the world is currently a merge created by an enigmatic artist operating under the pseudonym Pak. In addition to creating this work, he is also a graphic designer who shares his works in the field of motion animation and minimalist graphics on Twitter. The fascination with this trend can be seen not only in the images created by Pak. On the artist's profile, there is also no point in finding long statements or complicated descriptions. Even the background of his profile is just a black spot. Minimalistic and cryptic.

Coming back to the NFT itself, however, it's not unique just in terms of price alone. merge is also distinguished by the fact that it was bought by nearly 30,000 people, each of whom received their own piece of this work. You could buy several fragments, and in total all the buyers managed to obtain 312,686 units of mass, which make up the work.

However, the pieces of mass purchased by users are not just a piece of the merge. Each of the buyers, depending on how many masses they purchased, received a unique graphic, which consisted of fragments. It meant that if you wanted to sell your part of the merge, you had to give everything away. That's just how blockchain technology works; below is a fragment of the FAQ on merge, where this concept has been explained:

As soon as merge is bought on one account or wallet they are merged into one entity and they cannot be broken up or sold separately. For example, if you have an M(22), you would have to sell that entire M(22), and you CANNOT sell an M(1) and retain an M(21).

The premise of the drop in totality (hence the name, wink wink) is that only a single merge NFT can exist in your wallet after the initial minting and delivery. If you bought multiple, it was combined into one before delivery.