Assassin's Creed Valhalla – Siege of Paris is a lackluster expansion by any means, both in terms of visuals and story, with no memorable elements – apart from one brief, dark and disturbing soundtrack theme (it's literally 5-10 seconds long, but it's really good) and the fact that for the first hour or so there are almost no arrows to collect anywhere.

Is the next installment going to be even longer than Valhalla? Well, maybe it shouldn't – granted that any panache and inspiration seem to have been drained by the time the second bigger DLC arrived. And yet, there is still one more major expansion on the cards. With the addition of Wrath of the Druids, I wagered this game would never end. But now I want to back out – now I see growing chances the creators will butcher Valhalla before they can wrap up its endless storyline.

I wrote the above passage after 5 hours of the Paris adventure. I wrote it just in case, as I was hoping that towards the end, it would become irrelevant. Unfortunately – it did not. It remains just as true right now, after I've seen the entire expansion...

But it's not all that bad – there are some things here that I'd definitely like to see accommodated in any upcoming entry in this long-running series. And I don't just mean the mechanics. The Siege of Paris seems to say that in this universe, it's just better to be a girl, especially in times of war, and that it's women who have largely been running things. 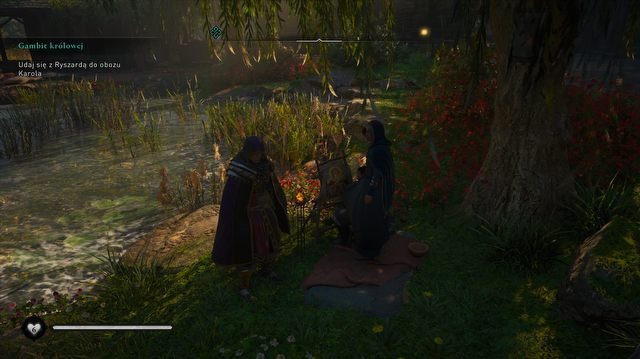 You can compliment this piece of art.

Even Eivor has had enough

A new building has been erected in your settlement – without your knowledge, it was built by newcomers from France. Among them – Toka and her advisor Pierre. They're here on behalf of the local Viking leader Siegfried (Toka's uncle) to throw a big feast, but you might already know that no one shows up in Ravensthrope just to feast. After a moment of conversation, everything is clear – they came here for help. King Charles III the Fat grows in strength (and, presumably, volume), and lurks about the Vikings like a hungry tomcat.

And if you need to ask someone for support, the brave Eivor, whose exploits have already become legendary, is the person to go to. But you could disagree – sadly, Toka has got a s trong point: once Charles is done with them, he'll surely invade England, and Ravensthrope will never be able to hold out the grand army. So, you're in for another incursion. And same as to Irland, your cat, for some incomprehensible reason, doesn't accompany you on the voyage to France – even though back home, it sails with you everywhere.

But that's just me. As a consolation, there are cats in Evreux waiting for you to pet them. Put let's talk about the women. 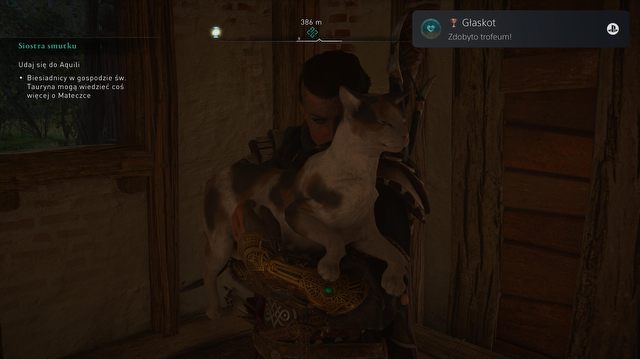 Petting cats is what ACV is all about.

The Siege of Paris, like Eivor herself, in this version, is essentially pacifist. I'd argue this is exhibited in the actions of the protagonist, as well as her inner dilemmas. After being caught right in the middle of other people's affairs once again, she sits with her raven in solitude and wonders aloud:

Far from home. Before another city of strangers. When did our lives become a saga, Syninn?

Eivor seems to have had enough. She's fed up with the killing, the violence, the constant wars of blinded rulers, the failure to honor pacts and agreements, and the fact that ius talionis, the law of retaliation, takes precedence over any common sense. Quite by chance, however, she also voiced what some of us have been thinking during this long adventure: we keep running in circles here.

We rush from A to B, kill this boss, kill that boss, mow down enemies like hay in high summer, the level of challenge steadily decreasing; find everything, kill everyone. This expansion might as well be part of the main storyline – it's just as bland, so you might not even notice a difference if you skip the dialogues. We leap from rooftop to rooftop again, and again we beat the opponents one by one, there's a battle, and a final boss fight. The repetitiveness is further exacerbated by the rebel missions – a side activity that essentially has you do more of the same thing. Worse still, you can't accept a few quests like these and get them done in one fell swoop – you need to finish one before you can go back to one of the contractors and accept another.

By fulfilling these missions, you build your infamy. The bigger it is, the more difficult the enemies become (a challenge, at last!). So, in practice, you run from enemy to enemy, and from order point to order point – ad nauseam. If you want to hit 100%, you just have to grind it through somehow. It's not easy. I gave up. 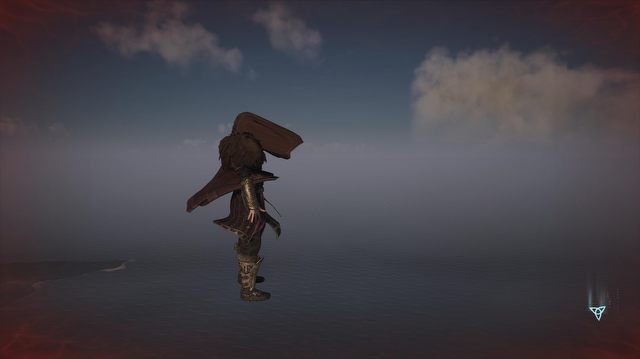 Why the long face? Every subsequent DLC brings the same bugs.

I actually liked it (overall)

In terms of mechanics, the campaign is saved by the spy missions, which help break the rut of typical Valhalla activities, at least a bit. Suddenly, you found that you could get things done in several ways, not just the obvious one. And story-wise, is there any salvation? Well, for me, it were the female characters.

I finally felt like girls had a strong representation in a mainstream game that I spend a lot of time with. Women are significant and strong, they're not afraid to defend their rights and convictions; they're not just talking, but acting; they do as they please, and most of time they're right. They're simply in the foreground. And that game is not The Sims.

Since I want to save you the spoilers, I can't fully illustrate what I mean. But Valhalla has had equality issues roughly cleared up from the start. It's still mostly a men's world, but you don't feel it as much when playing as a female Eivor. The Siege of Paris goes one step further, because in addition to the quantitative advantage, girls also get the qualitative one. Women carry out their plans behind the scenes, they negotiate, they have useful knowledge, they determine what and how, they sabotage and deal the cards, and thus bring stability to their people – they are the strong ones, the caring ones, the good ones. They are those who care most about peace, not constant conflict and violence. They are the ones who seem to be the future (though they are not the only ones), even if they also have their weaknesses and sometimes, like everyone else, lack clarity in their perception of the situation.

Quite literally, the stereotypical masculine way of governing has been abandoned. And I would be thrilled if this was the future of the series, even though the story in this expansion was shallow as a bottle cap, it at least had strong and significant female characters. So let's not compromise again. Make the story properly good the next time! 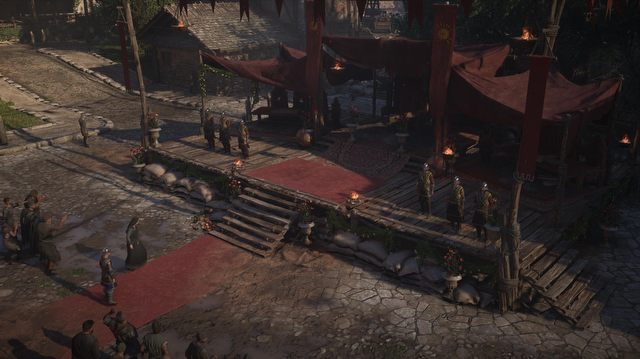 I didn't complete 100% of Siege of Paris. I took on the rebel missions after the main storyline finally exhausted me. Maybe I was doing something wrong? Maybe, but I doubt it. Valhalla is no longer a challenge for me, and with each addition, I foolishly hope that this will be that watershed moment when the game finally stops feeling like a piece IKEA furniture. The Wrath of the Druids kept that hope alive, but Siege of Paris dimmed it a bit. But it certainly didn't put it out completely! It had a few advantages, and they were considerable.

I spent about 15 hours with the expansion. And over 200 with this installment.