Everything changed when Bethesda gained ownership of the Fallout brand. The creators of The Elder Scrolls franchise have a specific vision of how a post-apocalyptic wasteland adventure should look like and we have to deal with it, no matter if we like it or not. In cases of Fallout 3 and New Vegas, the players could still harbor some hope that the good times can and will be back; for those players, Fallout 4 was the very definition of disillusion. But what if What if the post-nuclear franchise never left Black Isle? How would have their number three looked like? There isnt a single fan of the franchise that hasnt asked himself this question, and today, were here to answer it, even if only partially. Not theoretically, of course - we are going to test what the developers managed to create before the brand was pried from their financially stiffening fingers. The tech demo of Van Buren has been forgotten by nearly everyone, and yet it can still be found on the internet. What we have at our disposal is only a small sample, but its enough to make one thing very clear  it would have been a Fallout 3 completely different from the one we eventually got.

If you would like to form an opinion on the Van Burens dormant potential yourself, be sure to take a look at the tech demo, available through our FTP servers: 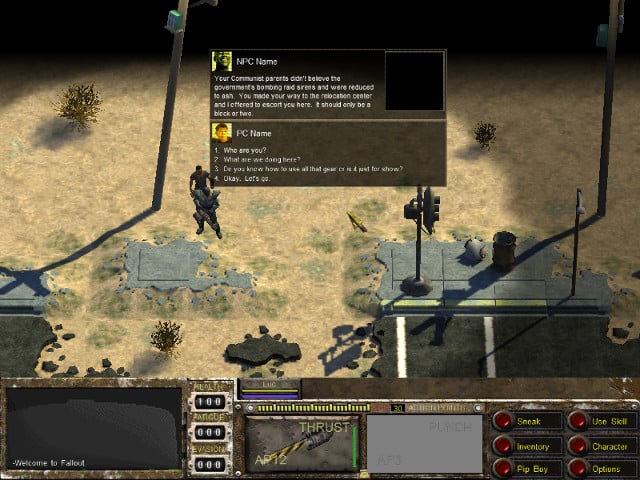 The dialogues are somehow more, I dont know complete?

An interesting thing is the expanded functionality of the pip-boy. Previously, the archive allowed us to replay the movies weve seen before in the game; except they were limited almost exclusively to cut-scenes and movie tutorials. In Van Buren, our hand-strapped gadget was given an entire tab dedicated to holodiscs, leading to an assumption that they could be found throughout the in-game world. And taking into account how many of them were listed in the demo, the final version would most likely include dozens, if not hundreds of them.

The games plot is up to debate - thats all that can be said about it. The content we see in the demo is severely limited, and was never intended to be a major plot point in the first place; still, it gives a good overview of how the narrative was supposed to look like. Now, before I go into details concerning what was eventually included and what omitted in Van Buren, let me briefly tell you what was supposed to be included in the finished game. The action of the game was to be set in 2253 and begin with a bang, giving the player his or her first, very important choice  will the players character go to the prison as an innocent person, falsely accused of murder or a ruthless murderer, guilty as charged. Depending on this decision, the character would gain additional perks and skills. Our life behind the bars, however, was to be rather short  one day, we would wake up in unclear circumstances in a completely different facility, only to hear sounds of a fight moments later and watch as a powerful earthquake brakes us out of our confinement. From there, we were to escape together with other convicts and flee from the relentlessly pursuing robot wardens. While avoiding them, as well as all the other dangers of the wasteland, we would have to survive and discover the truth behind the mysterious incident. Why was our character transferred to another facility? Where did that explosion come from? Is it true that the New California Republic is going through some very serious problems? And what exactly is the Brotherhood of Steel doing in this region? Questions and mysteries would pop up one after another, and for the answers we would have to wait until the games finale  in a manner befitting a true Fallout game, the number of possible endings reaches several dozens of unique stories. 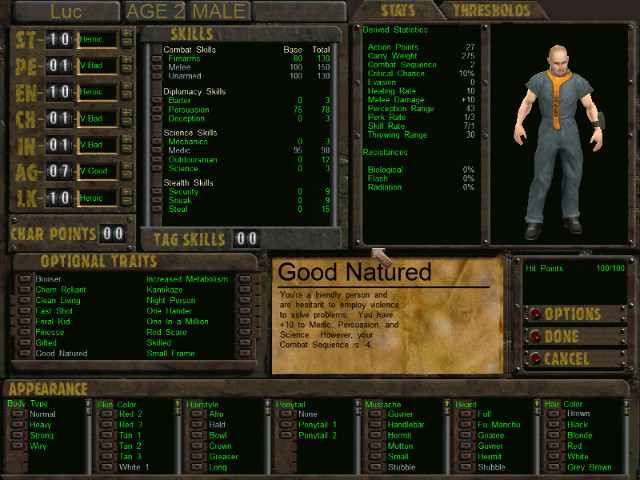 Character creation sheet - now thats a familiar sight. Albeit with some changes.

The demo, however, begins on a completely different note. It begins in the eve of the nuclear war. Does this sound familiar? Thats right, its Fallout 4; except Black Isle wanted do to something different with it. After the bombs fell and the world was engulfed by chaos, communist guerilla groups took control of the area our character lived in. Our only hope for survival in this chaos is reaching the nearest shelter. After characters parents die, murdered by the communists, one of the nearby soldiers  Corporal Armstrong - offers us assistance and escorts us to the vault. Together, you reach the vault only to discover, that the vaults Overseer is nowhere to be found. Frank, a guy that fills in for him, asks you to help with the repairs of the vaults life support system. As soon as we complete this task, the demo ends. In the final version, this sequence was supposed to be simply a part of the prologue  a tutorial to introduce the players to the games mechanics. 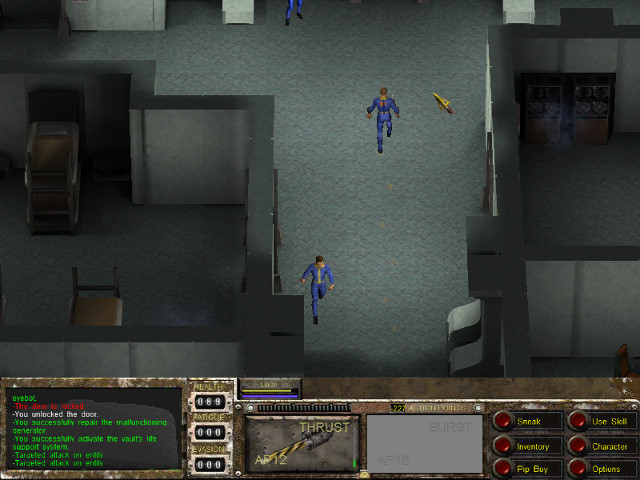 And there we have it - 100% pure vault dweller experience.

The new welcomes the old

To be honest, the demo is not that different from what weve seen in the first two Fallouts; which doesnt mean everythings the same. The first, notable, change can be seen on the character creation sheet. Although we still get to decide where to put our S.P.E.C.I.A.L points and what traits and skills to choose, the latter, namely skills, were rearranged and slightly simplified. All options have been assigned to one of the four main groups  combat, diplomacy, science, and stealth. One interesting thing is, the speech skill was divided into two categories  persuasion and deception, a solution intended perhaps as a way to further emphasize the importance of conversations and dialogues. Several weapon skills, on the other hand, were simply cut  no more small guns, energy weapons, throwing, and so on  instead, they were unified into one firearms skill. Additionally, the demo offers a good number of options when it comes to appearance customization, including things like the characters body type and several types of beards. 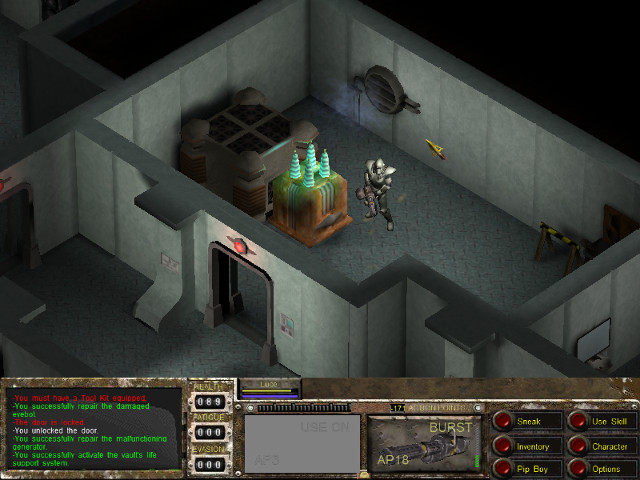 Should I take this power core from this generator, by any chance?

When we finally create the perfect character, its time to venture into the wasteland. The final version was to include both real time or turn-based gameplay modes and employ one of them  depending on the players preference. The demo offers only the real time mode; what it doesnt offer is the implementation of aiming and ammo count  weapons have to be reloaded, but youll never run out of bullets. Both of these features would be, without a doubt, changed in the final release. The dialogue system, however, as implemented in the tech demo, was basically ready to go. While it is possible that the complete game would reuse the token face to face conversation mechanics, in the demo the dialogues are based on speech bubbles and the choice of several different dialogue options encompassed in them. And now a short, and somewhat bitter, thought  in terms of character dialogues, even Black Isles trial version is still better and much more comprehensive than anything weve seen in Fallout 4. 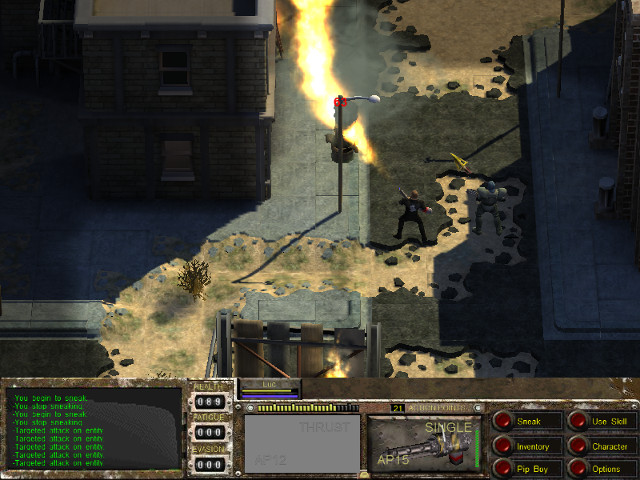 Just look at it burn!

The dialogue tree we dreamed of?

However, the dialogues are not the only thing that changed. Another, perhaps even more important change is the camera. Although the isometric view remains the default option, the camera can now be rotated, tilted, as well as zoomed. Furthermore, the new camerawork is more that art for arts sake  is seems like Black Isle intended to employ POV manipulation as one of the essential ways to explore the characters environments. There are many items or entrances in Van Buren that can only be discovered by changing our perspective on the in-game world. 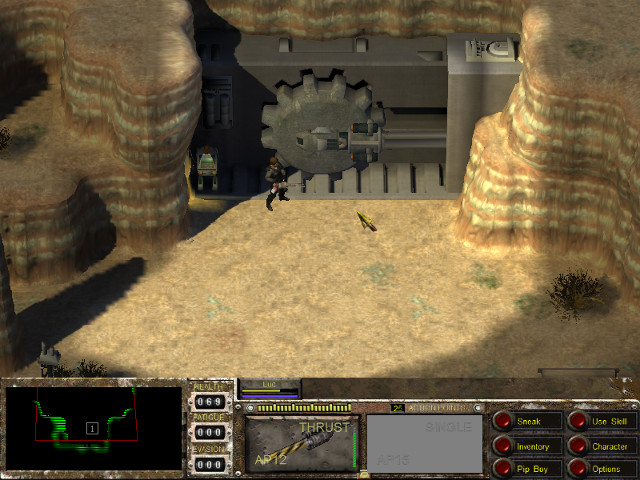 Instead of leaving the vault, Van Buren has us enter one. Fine by me!

Compared to modern standards, the game itself looks very modest; still, its relative ugliness (show me a game thats beautiful on pre-alpha stage, though) doesnt diminish its charms. I dont exactly understand how, what mechanism causes it, but as soon as we go out on the wastelands or make the first step outside of the vault, there can be no doubt in this matter  its the Fallout. You dont need super mutants or ghouls dancing around in vault suits to understand that this is the post-apocalypse we know and love. The locations we visit are not overblown, but at the same time every detail was carefully designed and placed  broken car parts laying around the wasteland, dumb-bells left on the floor of the vaults gym, the characters leaving footprints While not peerless in its class, it offers some nice accents for everyone. If you can bear with the fact that the demo is very unstable and lacks a save option, I recommend you to go look for them yourself. 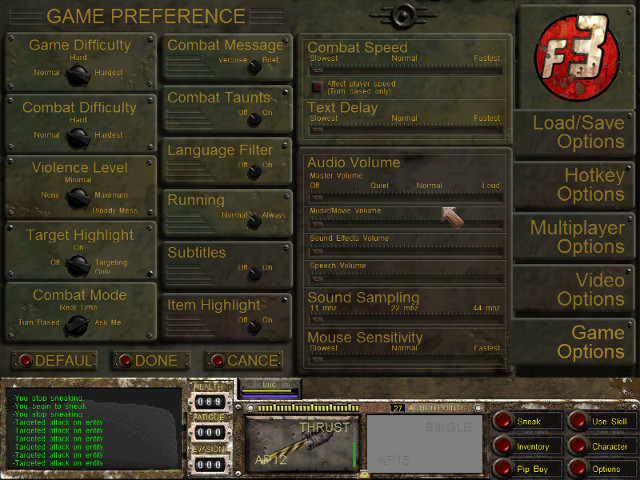 The preferences look rather typical. Except maybe for the multiplayer tab on the right?

The post-apocalypse that never came to be

Although Van Buren is a very nice and atmospheric short adventure even with its limited contents, it is too small of a sample to define full potential of the Black Isles game. The tech demo shows the direction the creators wanted to follow when combing the new and the old, but its not enough to be sure of the games most important aspects. New approach to exploration and focus on RPG elements; would it have been enough for the game to succeed? Would such a game sell better that Bethesdas work? Would it satisfy both the veterans and newcomers? Unfortunately, for some questions there is only one answer  we will never know.