No one doubts that toxic behavior recognized in MOBA games is a serious issue that can be applied to the biggest names within the genre - DOTA 2 and League of Legends. How the men behind these titles deal with nasty attitude like that? It's more common than you think and it screams of primitives.

"I got my BETA access to DOTA 2 oh somewhere around 5 months ago. DOTA is a lot of fun. It is an extremely complicated and entertaining game." - this is what you hear from MOBA's most devoted fan, Verzin, while scrolling down through one of the forums. "Here's what I don't like about MOBAs: the people who play them. It just seems to me that a community of players that has practically accepted the that raging, flaming and harassment are perfectly normal is... broken. My personal favorite was a game I played a few months ago where a Tiny went mid. He did very badly. A invoker on our team started raging. The usual Ur a f*cking feeder faggot went on for about 10 minutes. Then he started telling the poor guy to kill himself. WoW Killer, yet another player, joins the conversation: "Multiplayer gaming is a social activity, and if the community is bad, the game is bad. If they want a better experience within the game they should be trying to create a more welcoming community". Is that even possible when the Internet's nature has its own demands? It's a dark side of the power and its laws are brutal. 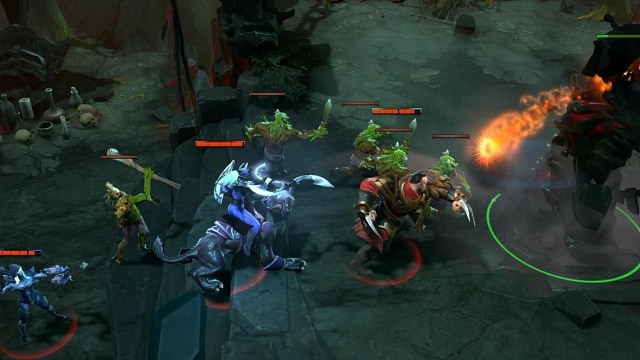 It's like a thing now, that the real-time strategy games of the Multiplayer Online Battle Arena (MOBA) attract loads of new players every year. It happened in case of League of Legends, it happened with Defense of the Ancients and there's no doubt that the upcoming Heroes of the Storm will be a winner as well. It seems, however, that the lion's share of the players take their hobby a little bit too seriously. Let's say... you don't know the game's rules or you're just not experienced enough, like all of these "tough" guys behind a keyboard. You happen to loose the day for your team. Boy, you're gonna get in trouble. Prepare to get showered with verbal abuse, death threats and general oppression. Naturally, sometimes we all tend to get carried away or feel a bit irritated because of some weaker peers. Yet shouldn't we stick to the ground rules, keep our mouths shut and remember about a little something called good manners? Be good to one another, guys! I mean... Calling other players' mothers names - really? Are we in school again? Sure, there are plenty of teenage MOBA maniacs. They're professional players, however, that make up the vast majority of the cruelest players. And that's a mortifying part. 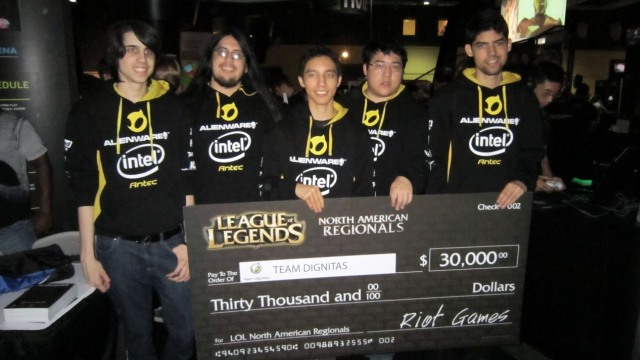 Christian Rivera (first from the left) is not the only one player that could banned from professional league.

When competition is reaching a certain point even professionals can sometimes compromise themselves. You might have heard about the case of Christian Rivera (20), also known by the - not so subtle  nickname IWillDominate, who got kicked out of the League Championship Series for a whole year, because of his toxic behavior. Apparently teasing, verbal abusing, yelling obscenities and expressing negative feelings are not gonna make a positive impact on your career in e-sport. Not if you're aiming high and want to be seen as a role model for the expanding community of the Riot Games production. In this case the punishment cannot be severe enough, as these repulsive rants are mostly targeted at less experienced MOBA contenders. A well-respected developer cannot afford such bad publicity. You can't simply muffle those voices, nor ignore them, as this game should be fun! It's about finding joy within the game, cooperating with your lot and making decisions. There's nothing you can do if someone decide to skip the game and not give a damn about younger players. But there are some tactics for those who throw rocks at them. 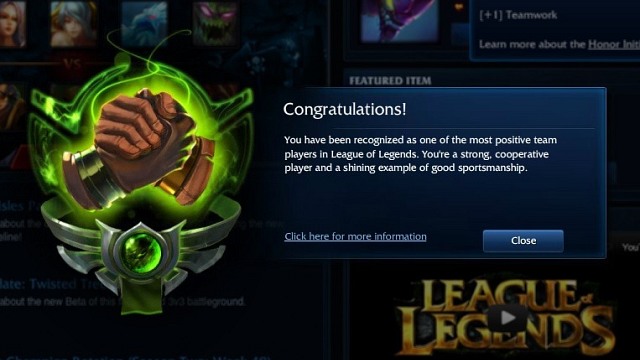 "Welcome to DotA. You suck. You are going to be constantly reminded of how much you suck for about 1-3 months."  these are the exact words of wisdom that greet the poor N00bs that start their Defense of the Ancients' experience with checking the official guide, bless them. In your dreams you're hoping for a stress-free adventure with some hardcore, yet friendly companions who walk you through the whole game, step by step. Well, here comes the reality  no way it's gonna happen. Nope. So brace yourself, cause there's a war coming upon you, soldier! You don't like it  go back to your trusty games, like The Sims, Angry Birds. It's a collective work that really counts here, as well as your skills. If you happen to be the underdog, you'll be left behind and destroyed. It's the law of the jungle that holds sway. It's not in the players' nature to be forgiving. As they all say  you better brace yourself beforehand and grow a thicker skin. It's quite easy to become a scapegoat as the game shows it all, including the mistakes you make. Other players' errors will be swept under the carpet while you're gonna be blamed for the fact that your team is losing. Most of the yells come from the blokes who just want to blow off some steam after a hard day. The other ones just simply like to handle stuff with some verbal aggression. It's like a fight in a pub, you know  nothing personal, just a couple of guys going through the testosterone storm. The users of the official DotA forum (at least most of them) treat those insults as a part of the game. It becomes an issue only if someone is seriously crossing the line or keeps abusing you verbally after the game's end. 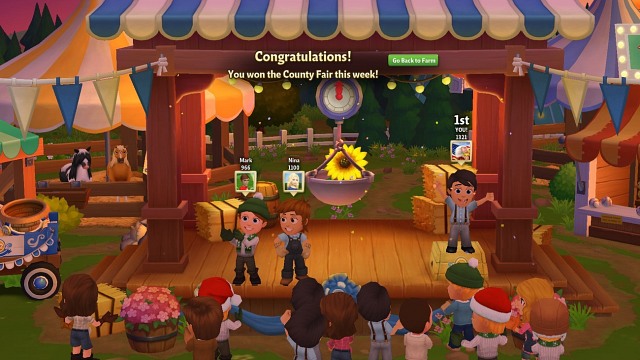 The acceptance of cyber mocking is not gonna change anything, though. Riot Games studio, the very one that brought us iconic League of Legends has established the Player Behavior and Justice Team that'll help understand, identify and remedy online trolling. "We don't like players being jerks in games."  said LoL lead producer Travis George. "We actually have built a team around this. There are a lot of really talented folks on that team, including two PhDs. One's a cognitive neuroscientist and one's a behavioral psychologist. (...) We've actually developed specific trends, and our own set of metrics that we look at for measuring what percentage of times we think that players will encounter a negative experience in a game, and how severe that negative experience is. Generally the line is people being mean for the sake of being mean, telling you what to do, telling you how bad you are. And I think we can actually fix a lot of that."  he added. Turning off voice chats, ignoring the insults, reporting the aggressors, banning the offenders  those acts are a logical necessity. Yet we can't help but wonder: are there some other ways to deal with this issue that'll lead to MOBA's environment being friendlier? 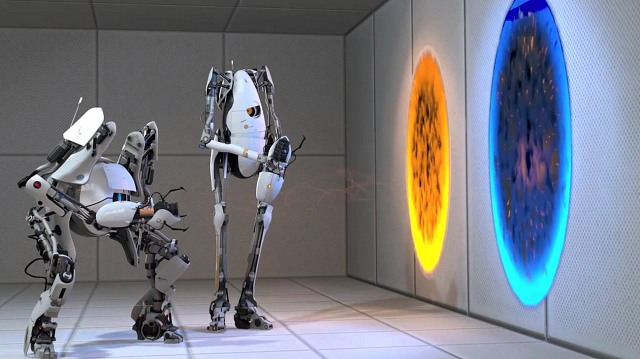 The guys from Player Behavior and Justice Team think so. They decided to establish an Honor system to incentivize positive behavior among the community and identify its summoners.

The idea is simple and has been verified throughout the years. It's like an animal training, non? But you're switching form giving paw to actually reaching towards beginners and less experienced players by giving them a helping hand. It's about acknowledging their mentors that have had a positive role in their matchmade games by giving them honor for being Friendly, Helpful, an Honorable Opponent, etc. Although you can't just spread the love like a crazy person, as you have a limited amount of honor to give. If you actually gain someone's sympathy at the end of a match and notice an honor on your profile, then you should be really proud of yourself. It's a kind of exciting thing, to be honest, as acknowledging other summoners gives you the exclusive crests and ribbons. Honoring other players for being decent human beings and encouraging them to remain that way seams way better than being punished by kicking out from the server. 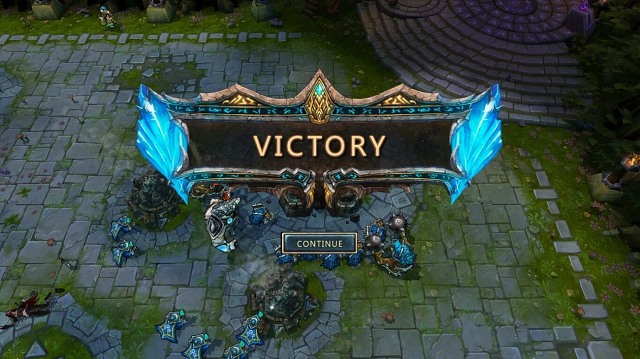 Riot Games was the first company to point out that having fun while playing a game should be more important than winning it. In these types of games mobbing only makes the bullies look like emotionally immature beings who prey on people's weaknesses. Fortunately, there are no bitcoins to steal here! Not everyone is born to be a professional gamer, but these folks have their fair right to have some fun as well. "Consider a player that just had a poor gameeveryone (including him!) knew that he was the worst player on the team. Hes feeling a bit down and is considering whether to play another match at all after such a terrible performance. Suddenly, he gets a pop-up after he leaves the game that says: Hey, 2 of your teammates thought you were really friendly and 1 of your teammates thought you were a great teammate. That moment changes everything"  noticed Jeffrey Lin from Riot Games. "Without the system, this player might have just logged off with a bitter taste in his mouth. Now, weve nudged the negative experience into more positive territory."  he added. 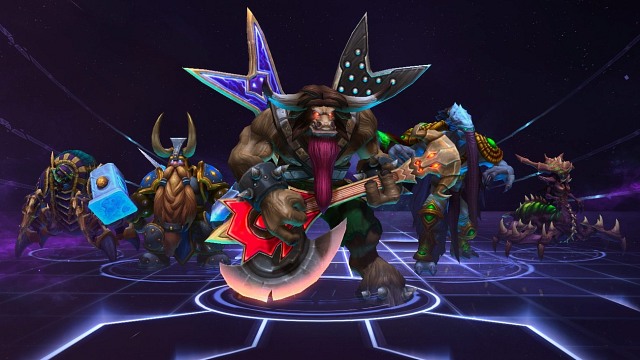 Internet has its own demands, that's a fact. Yet it's full of crude and boorish guys who feel safe hidden behind their computer screens, as if it could justify the lack of good manners while playing multiplayer games. Does it? Not necessarily. Indeed, expressing anger by participating in verbal fights can be quite an entertainment. It's seams almost therapeutic, isn't it? Only under the condition, however, that both parties are aware of it and in the end shake their virtual hands in agreement. If the argument is not used against the matters unrelated to the game itself you can always turn a blind eye to it. Or simply feel free to use a trusty option called "ignore". Riot Games commitment to studying the issue and seeking the effective solutions is an awesome thing. As for the full time bullies - there's always an option to punish them temporarily or permanently, by suspension. Two of the professional players, who were banned from the game earlier this year  Alfonso "Mitha" Aguirre Rodriguez and Erlend "Nukeduck" Vatevik Holm  have used their twitter accounts to make a promise to amend. They also communicated that in the near future they will be coaching other teams, while taking care of their emotions at the same time. It seams like the good, old "carrot and stick approach is still a thing, nowadays, eh?