There's no point reiterating all the fine points my colleagues have made over the last few days. They've already covered a lot of things about the technical condition, plot, and mechanics of Cyberpunk. I want to write about the city. I always appreciated metropolises in games. That's why I adored the perfectly average Assassin's Creed Syndicate. I was delighted with the gloominess of Arkham City, and I praised Rockstar for what they accomplished with GTA V more than once. Their version of LA looked completely like the real thing, but at the same time it was completely unlike this terrible place. It was like a beautiful dream of that city. But CD Projekt RED has raised the bar two stories higher for all those games. 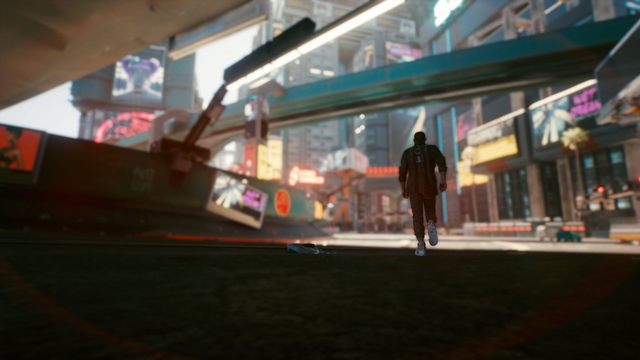 I play on Xbox Series S; there are bugs, but the game looks nice and runs completely smooth. Needless to say, it has affected my reception of the game.

Driving along the Watson Wharf and looking downtown, I'm almost shivering. You can see that the designers of Cyberpunk 2077 were inspired by Asian megacities. The three-level intersections, for example the one at the Ueno station in Tokyo  a street, a crosswalk the size of a city square, and above it a flyover for cars. Night City obviously has much more. 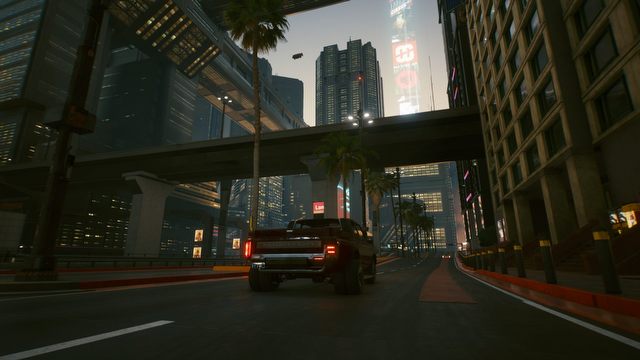 The city soars and takes every bit of space.

Skyscrapers are soaring above strands of roads, with even higher scrapers in the distance. Hanging horizontally somewhere in the clouds. And between all of this, there are the stairs, alleyways and booths. The city seems to have accommodated every square foot, and this is certainly adding to the realism of this wacky world. In Night City, even if there's some empty space under an overpass, there will be giant fans there, pushing tons of moist air into giant office buildings, or a wild dump. Yes, the world is full of garbage. When I went out of town, my car got stuck in the desert in plastic bags full of garbage; behind the dam, instead of a river, there's another dump (when I discovered it, I was genuinely stunned); even the city center is littered with boxes, cups, and tons of plastic waste that's no use to anyone. Yes, this is exactly our future.

Densely built-up streets tightly shielded from any sunlight. The last star on the sky becomes invisible, and the occasions to see the Sun in a remote location near a body of water were certainly uplifting. Just like in modern American metropolises. In some places, the buildings are so tall that it's difficult to catch them with the photographic mode's lens. It's a trip. 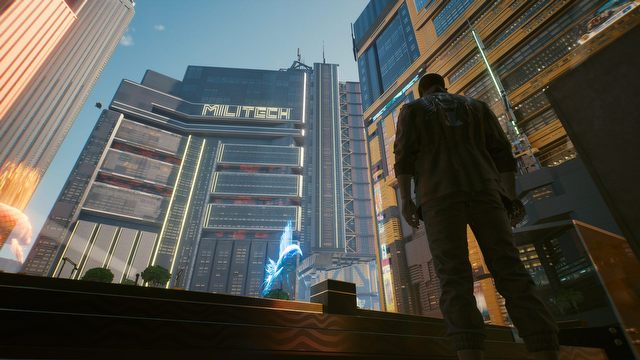 Corpo Plaza is stunning, and that's the purpose  it's manifestation of sheer power of the overlords.

But Night City isn't only about giant buildings  it is also about small, inconspicuous locations. One of my favorites is the roundabout in Kabuki. Not only is it a lovely little marketplace, but also a second mini-circle behind the gate, and a hotel next to it. You can pass it 10 times, and then you will get a mission where you will find that you can enter the room on the second floor in at least 3 ways and kill our target, or convince them that we are right. Yesterday I walked around the neighborhood, hit a couple of inconspicuous alleys, to the underground passage between the lower level of the roundabout and the mentioned mini-circle, and got the mission by the way. 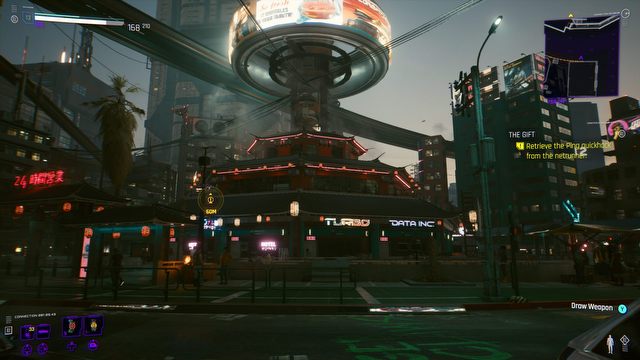 My favorite spot in Kabuki. 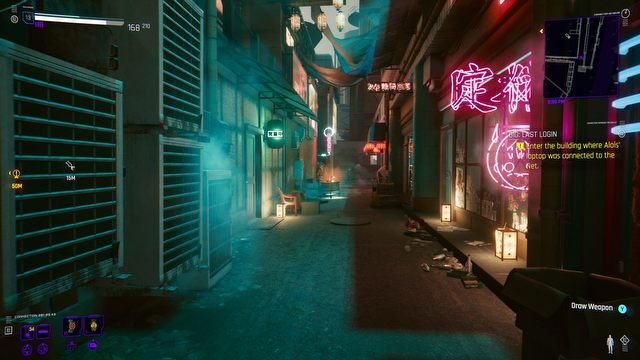 And a backalley around it.

Probably the fifth time I visited Viktor, our Ripperdoc, I discovered that there's also an elevator in the yard where he has his couch. You can go to the roof of a not very high building, find a rifle, and look at everything from above. Another time, I got a mission to Watson to discover that one of the buildings can be accessed. You can walk upstairs and see that these nice, futuristic blocks hide dilapidated hallways that you'd expect to see in a city destroyed by some long war. It's amazing, because you can see the ultra-modern, glowing, colorful center from this block. I felt like in Shanghai, where from the slums (clean and peaceful, but evidently poor) I could see the second highest skyscraper in the world.

In the center, there's a beautiful park, surrounded by skyscrapers; in Corpo Plaza, we can admire the headquarters of the megacorporation; from the height of the dam just outside the city, you can see the toppled mill wheel, which was probably once an interesting attraction. Anyway, a whole amusement park is hidden in the Pacifica district, standing right next to a big, probably deserted shopping center, which I was afraid to enter. 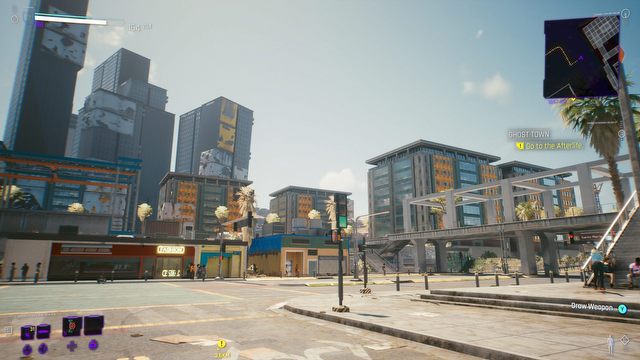 Pacifica looks like it was hit by a hurricane.

What is amazing about this is consistency. The districts are different. Some look like from Demolition Man, others like Judge Dredd. The center is vibrant with life, and you will not meet a living soul in the evening in industrial districts. The Japanese district is full of oriental ornaments, and Pacifica looks like after a hurricane. But at all times you can that this is one and the same city. Maybe it's because all these places have one thing in common  squalor.

Even the lovely neon center has places, somewhere by the stairs, maybe under the bridge, where unsegregated garbage mixes with human trash, ready to hurt you for a few eurodollar. You see homeless people sleeping on the sidewalks next to pedestrians, like you do in almost any major American city. It happened to me that following the corpses lying on the street, I found three cyber-bandits, smoking cigarettes after a murder and staring from the footbridge into the street. I ripped out them weeds. In front of the headquarters of the powerful Militech, corporation I saw a protest. A few activists made a noise and a combat robot and a few soldiers looked at them without much interest. Everywhere you go, it's apparent that something is very wrong with this world.

What's probably the most amazing, however, is the size of this place and its sheer density. This isn't Los Santos, with a single skyscraper district. It's an urban jungle. I've done about 20 hours of the game and still feel lost, and it's not that I'm discovering any secrets: I've only visited some districts by passing through, and the suburbia are still terra incognita for me. And in places I think I know; I keep discovering something new. 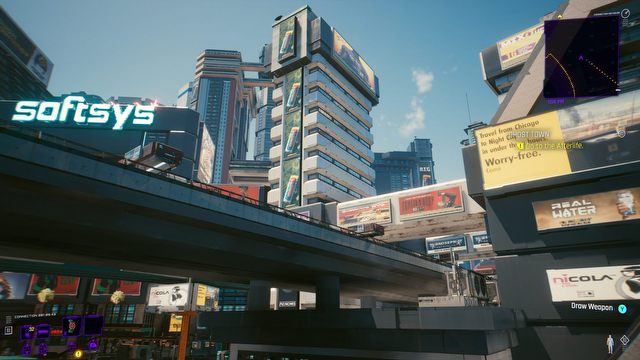 This isn't even the center  just some random blocks.

Is there anything to do?

Of course, the most important question is: what can you do in this great city? This became a topic of lively discussion in our editorial office at some point. There are no free activities like fishing or hunting. The broken police system also effectively discourages cheerful, GTA-style robbery. If you're looking for them, this is the wrong address.

There's no shortage of side quests and gigs. While driving around town, I keep getting calls and it happens that a completely unexpected walk turns into a casual, 30-minute sneaking mission. We can also find a lot of loose groups of bandits scattered around the city, who either just stand there or shoot each other. If you want to, there will be a chance to break the fight up. Is this a better or worse approach to creating open worlds? It sure is different than Skyrim, GTA, or Zelda. However, I certainly can't say that I'm bored when I decide to let the main thread rest a while and simply explore. In fact, I haven't touched the main quest line for three days. I watch and I have fun. 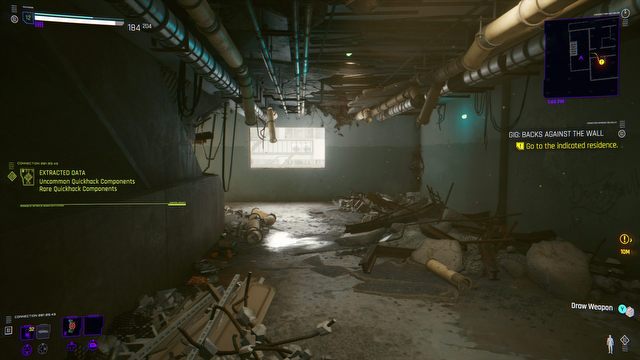 Regular flat in Night City, but looks like it's This War of Mine.

Is the city alive?

This city creates a semblance of life. If you are an attentive detail hunter, you will surely notice that NPCs don't go anywhere, street food vendors keep repeating the same talk over and over again, and cars only drive to create movement. This can be bothersome, and it could certainly be done better, but still: no digital city and few real ones gave me so much joy from just walking around and observing this exuberant, concrete, chaotic urban tissue, whose only purpose in existence is to occupy space, cover the sky, and drown our own thoughts out in the hum. I love Night City.