I've been carrying this idea around for some time and finally turned it into flesh. After more than two years, I returned to Red Dead Redemption 2 to once again relive the gradual downfall of Dutch's gang, along with its most tragic hero  Arthur Morgan. It's been a marathon for over 20 hours now, and while the story is still very, very far from over, I'm reaffirming my belief that this is the best game in the history of electronic entertainment and that it may never be beaten.

Of course, I have been playing the game throughout the two years, and I've actually clocked about 500 hours there so far. However, I've spent most of the time exploring the mechanics, discovering all sorts of secrets, and played online quite a lot. I didn't touch the plot because I simply wasn't ready for it. I preferred to forget many of the events I experienced before the game's release, and it worked in a way. Sure, it's hard to erase key plot twists from memory, but Red Dead Redemption 2 offers so much content in-between those pivotal story points that I feel like I'm really rediscovering the game.

I understand that this is not everyone's favorite game and there will be many of you who sneer at the sound of the word "masterpiece." You may even feel off-put by the slow pace (as required by the genre canon) and almost frightening amount of dialog and exposition. That there's not much action at times, and we have to shape Arthur's adventure on our own to a large extent, because although RDR 2 retains the typical Rockstar mission structure, many things worth appreciating were packed in between them, and not necessarily in the form of additional activities that turn every open-world production into a frantic run from question mark to question mark. There's moments in this game that you won't find nowhere else, and some of them are very easy to miss, such as when you ride out after Sean's party. If you do, hung-over Arthur will hum the songs from the night before, but only if we make the effort to listen to these songs and try to awkwardly sing along the rest of the gang. 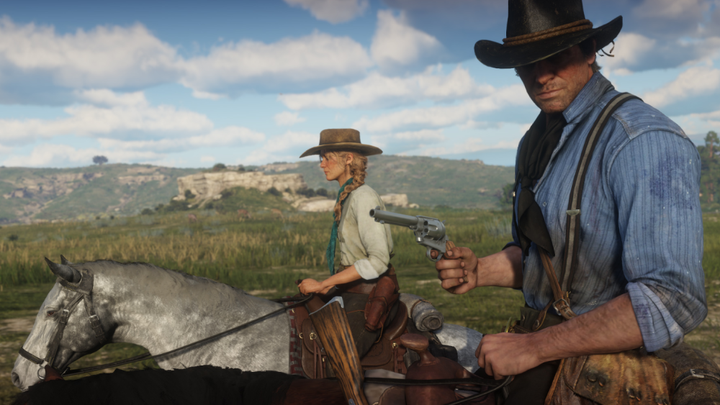 Red Dead Redemption 2 is the undisputed king of open worlds, their one and only true benchmark, but that's something I've said several times before. As I uncovered its secrets, often after hundreds of hours, I often wondered if anyone will ever be able to top it. I'm also asking myself this question now as I once again savor the story campaign. The bar has been set so damn high that it will probably take another six years for Rockstar to top it. Of course, achieving the next level is what this studio is all about, but I don't even dare to imagine what kind of a game GTA 6 would have to be to outclass RDR 2. Given that Arthur Morgan's adventure took eight years to develop, the return of Grand Theft Auto may realistically be closer to 2030 than 2025.

Well, I'm back at Horseshoe Overlook for another challenge; after all, Kieran is still tied to the tree and demanding attentions. You guys, meanwhile, can go after me for over-glorifying a boring nitwit. I don't give a damn.