Neuralink is a major advance in understanding nerve impulses. However, Elon Musk isn't the only one working on reading human brain. Many teams of scientists are interested in this niche of bioengineering. Researchers at the Howard Hughes Medical Institute (HHMI), led by Professor Krishna V. Shenoy have discovered a way to significantly speed up writing for paralyzed people.

The researchers placed implants in the area of the brain that is responsible for communicating with muscles in the hand. They then asked the test patient, who was a 65-year-old man paralyzed from the neck down, to imagine that he took a pen in his hand and began to write. Thanks to electrodes with which the implants were equipped, the patterns of individual letters and several additional characters were recorded.

In this way, the device called BCI (Brain-Computer Interface) was created, which is currently in the early prototype phase. It is based on almost 200 electrodes placed in the premotor cortex of the brain, thanks to which it is able to read patterns of neuron activity and, using AI-based neural networks, interpret them as letters displayed on a computer screen. The BCI can achieve a typing speed of up to 90 characters per minute which is much faster than the systems used so far (e.g. eyeball-controlled cursor and on-screen keyboard). 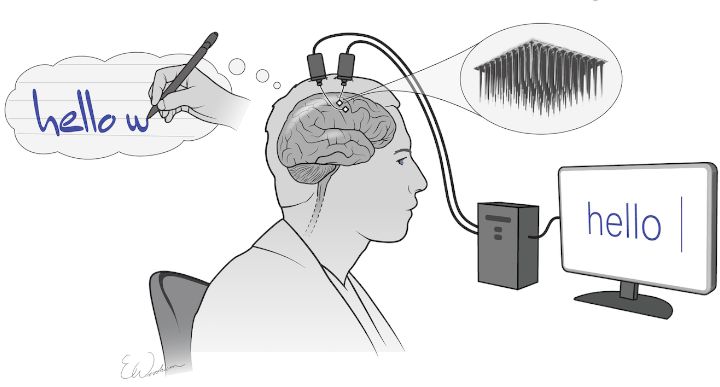 Schematic of the interface the researchers are working on. Source: HHMI

Reliability of character interpretation is currently 95%, and up to 99% with smartphone text correction. Of course, there are also some drawbacks. The device requires weekly calibration due to neuronal changes and the build-up of scar tissue around the implants. At this stage, the BCI cannot recognize capital letters and punctuation marks.

Only one person has participated in the tests so far, and a specific set of words was used. With free writing, character input speed (up to 75/min) and reliability (98%) are slightly lower. It remains to be seen how the BCI will perform in collaboration with other people. There is still a lot of work ahead of the research team, including tests on a larger group of patients. A new interface is a chance for paralyzed people to easily communicate with the world.