Virtual truckers! The day has finally come when we can hop in your trucks and set off on a journey across the Iberian Peninsula. For as previously announced, today at exactly 10:00 AM PT, the Iberia DLC, announced in December 2019, launched on Steam, expanding the map in Euro Truck Simulator 2 from SCS Software to include Spain and Portugal.

The Iberia add-on will feature 49 cities connected by roads, the map of which you can find here. Between them we will be able to transport various loads - from fish and fruit to electronics, metals, chemicals, wood and special heavy goods. What's interesting is that the newest DLC adds the first landmarks to Euro Truck Simulator 2, similar to those in American Truck Simulator. When we reach them, we'll be treated to a short video presenting landscapes, monuments and other interesting objects. 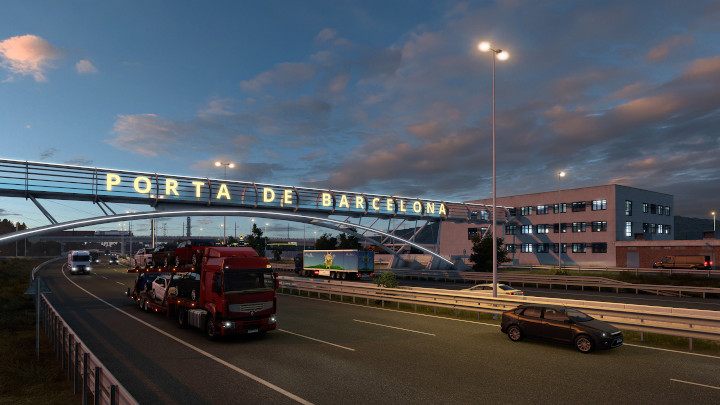 The latest expansion for ETS2 will include a visit to Barcelona.

A special event called Cruising Iberia has already been launched on the World of Trucks website, which enables us to carry out various single-player assignments online. As part of this event, the players are faced with two challenges - individual and community. The first consists of delivering cargo to or from at least 20 cities located on the virtual Iberian Peninsula. The second requires all players to cover a total of 250,000,000 kilometers on the roads of Spain and Portugal. The event will run until May 12. Note that in both cases, only contracts from the category of External Orders and External Market, which require driving a minimum of 200 kilometers, will be included in the pool.

The reward for completing the personal challenge will be a special truck paint job. Obtaining it is a prerequisite for receiving prizes for completing the community task, which will be accessories for the cab - a teddy bear and a figurine. All additional details can be found here.

In addition, on the occasion of the launch of the Iberia DLC for ETS2 on Steam, SCS Software's official YouTube and Twitch, a stream started at 8:00 AM PT.

If you are interested in Euro Truck Simulator 2, you should know that it is available only on PC.