In early February, Google announced the shutdown of the Stadia Games and Entertainment team, which was to be responsible, among other things, for the development and support of games for IT company's streaming platform. One such game was to be Journey to the Savage Planet. In 2019, Google became the owner of Typhoon who is responsible for the title. The game was added to the Stadia Pro subscription on February 1, this year. Shortly thereafter, a series of curious events occurred.

Two days later on a subreddit dedicated to Google's streaming platform, a user named lordubuntu reported a serious bug associated with the newly added title. Namely, the game stopped working as early as in the main menu and it was impossible to start or continue the game. The problem also happened to other commenters.

The creator of the thread wrote a message to Stadia's support, but received an evasive answer to contact the publisher, 505 Games. The latter's customer support couldn't help either, as all the data of the Stadia version (including the game's source code) belongs to Google and it's up to them to take care of the fix. 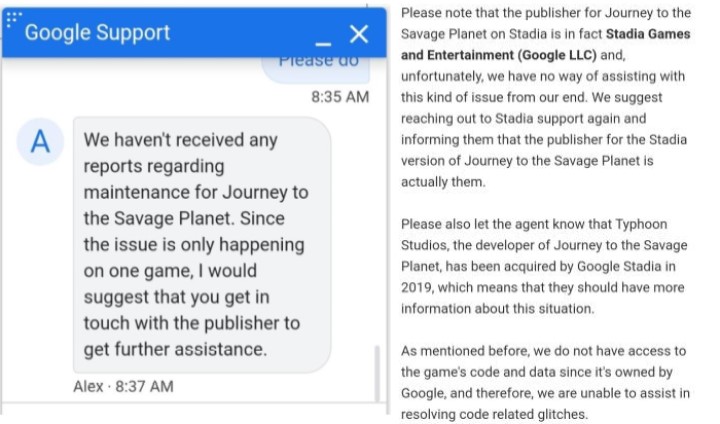 However, Google can't do it because it doesn't have the right people to take care of it. All of the employees that make up Stadia Games and Entertainment are likely already working in completely different places within or outside the company. It has been 3 weeks since the thread was created on Reddit and there is still no official solution and no statement from Google.

This approach makes us question the announcements of Phil Harrison, who assured that despite the closure of internal studios responsible for the exclusive games for Stadia, this year should see the release of those that are close to completion.