Marauders offers many tasks, but some are built around similar patterns. Recently we described quest in which you had to find a half-track bike, and today we will present a way to find the engine on a merchant frigate.

How to find the frigate?

Finding the engine is required to complete the Pirate Rank contract. It requires you to find the frigate, locate the engine on it and study it for 25 seconds. The only difficulty in this task is finding the frigate itself. The game does not tell us where specifically it might be, so the best solution is to take part in several raids until you eventually find it. It is a large ship with red lights. 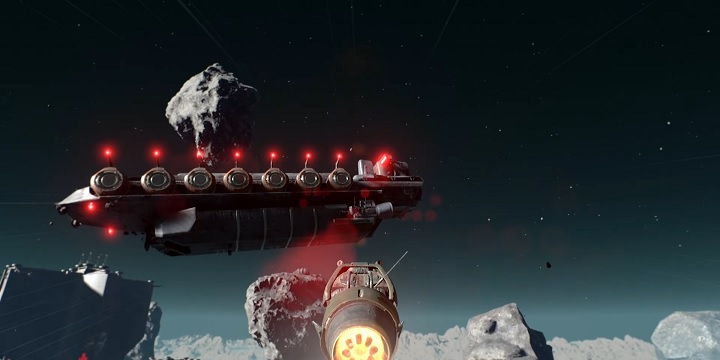 You can recognize a merchant frigate by its red lights

Then you have to dock in it, and then another, albeit small, problem may arise. You never know where you will find yourself (spawn), although sometimes the player may appear right next to the engine. If, after entering the frigate, you will be on its lower level, it is only necessary to go to the main level. The engine will be located at the back of the frigate. It is a mechanism of considerable size, so it is hard to miss.

The engine on the frigate

Then you should only approach it and study it for 25 seconds. Before that, it is a good idea to make sure that there are no opponents nearby that could interfere with the examination of the engine.

GTA Almost Wasn't Made; Even the Devs Didn't Believe in It