The gaming industry says goodbye to Google Stadia, which will be shut down on January 18, 2023. Ubisoft announced that it wants enable gamers to transfer games purchased on the platform to Ubisoft Connect (via The Verge). With this move, gamers who own the company's products are expected to be able to continue enjoying them on PC. However, we don't know many details at the moment.

Ubisoft representative Jessica Roache assured that the company is "currently working" on porting the games to PC and will inform about details, including the impact on Ubisoft+ subscribers, at a later date. For now it has not been revealed what will happen to the progress in games used on Google Stadia, and as we have recently seen from the example of a certain Red Dead Redemption 2 player, who spent almost 6,000 hours in this title - its loss could hurt. 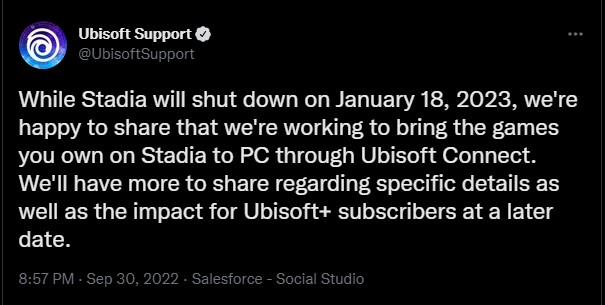 However, this decision is not dictated by the complete abandonment of users by the owner of Stadia. Google is following a refund policy and by the time the service is shut down it wants to realize most of them, so players can expect to get back the money.

Ubisoft itself plans to invest in streaming gaming, despite the Mountain View giant's abandonment of the project.

"We believe in the power of streaming and cloud gaming, so we will continue to push the frontier to deliver amazing experiences for our players, no matter where they are," Roache said.