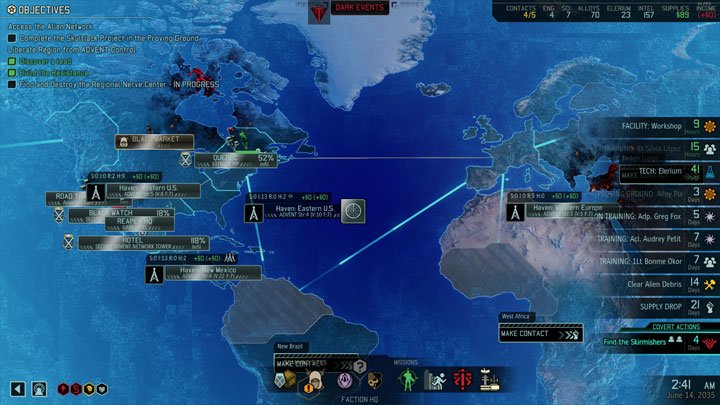 On top of the existing vanilla mission types, you will also have a chance to take on a few new mission types, such as Smash and Grab and Jailbreak (rescue resistance contacts)

As Long War of the Chosen is a more challenging experience than vanilla, the general recommendation is to play at a difficulty level at least one less than you're comfortable with in vanilla. So Commander if you're a Legend player and so on.

Keep an eye on our r/LWotC subreddit to keep up to date with news and new versions of the mod.

Our wiki has some useful information for new players, and you can also join our Discord Server to ask people questions in real time or simply chat about the mod.

We have largely tried to keep as much of Long War 2 version 1.5 intact, but some things have changed to incorporate how WOTC works and we have also made some balance changes that we felt were worthwhile. Significant changes include:

Unsubscribe from the X2WOTCCommunityHighlander mod if you're subscribed to it. Don't worry, the version that comes with LWOTC (and is required by LWOTC) is backwards compatible with the version on the Workshop.

Download either the latest Dev build or the LWOTC beta 4 stable release from Nexus Mods. The full releases include Long War of the Chosen itself and a custom version of the Community Highlander.

Unpack the zip archive to your Steam\steamapps\common\XCOM 2\XCom2-WarOfTheChosen\XComGame\Mods directory (on Windows). If the 'Mods' directory doesn't exist, create it first.

Upgrading from an earlier version of LWOTC Remove any existing LongWarOfTheChosen and X2WOTCCommunityHighlander folders from the 'Mods' directory before unpacking the new ones.

Mac Note: do NOT unpack to the wotc directory, follow these instructions literally. defaultmodoptions.ini should look like this:

Download and install the latest release of the Alternative Mod Launcher. In AML's settings, make sure there are at least two paths to mod directories - one for the workshop mods, the other for local mods.

Subscribe to all the mods in the [LWOTC] Required Mods collection on the Steam Workshop.

Delete all the files in Documents\My Games\XCOM2 War of the Chosen\XComGame\Config (don't worry, these will be regenerated when you start the game).

Important Do not delete the config files in the game directory, i.e. Steam\steamapps\common\XCOM 2\XCom2-WarOfTheChosen\XComGame\Config - the game will fail to start if you do.

Start the game with only the Long War of the Chosen and X2WOTCCommunityHighlander mods selected, as well as the required mods listed in step 5.

If you see a "Long War (LWOTC)" button on the main menu, you're good to go!

You can now exit and enable all other mods, consider subscribing to the recommended list of LWOTC mods for a better experience.

If you get an "Enable Tutorial?" pop-up, click "Disable Tutorial". Doing otherwise will enable the Tutorial, which will brick your campaign.

If you get a "Disable War of The Chosen Introduction?" pop-up then click "Disable Introduction" Doing otherwise will enable Lost and Abandoned, which will brick your campaign.

Enable auto saving, so you almost always have easy access to a save file that reproduces any bug you encounter.

For a full list of mods and information, we have a HUGE community-maintained list of mods and their compatibility. However, there are a few mods the LWOTC team would like to explicitly talk about.

Mods you should not be using with LWOTC

These mods are already integrated into LWOTC.

These mods (and arguably any mods that require these) may cause crashes when launching some missions in LWOTC. That said, we welcome anyone giving them a try, since it's been a while since we tested them.

Missing Packages Fix + Resources This seems to be OK.

Mods the LWOTC team wants to explicitly recommend to you.

[WotC] Mod Config Menu Provides a "Mod Settings" button on the XCOM 2 options menu that gives you access to configuration settings for various mods, including robojumper's Squad Select. Additionally, many mods use it to allow the player to configure them.

List of Quality of Life mods that work OK with LWOTC, and we recommend.

Free Camera Rotation Lets you move the camera at 30 or 45 Degree intervals instead of 90 Degree ones. Note that it overrides the Target Preview key by default, so we recommend you edit the mod's XComInput.ini file and disable or rebind the entry for "LeftAlt" (just put a ; at the start of the line to disable it).

Evac All - WOTC Adds a command to Evac all units in the Evac zone.

Gotcha Again Adds various Icons and Indicators to let you know things like who you're flanking, line of sight to allies, triggering enemy overwatch, and more.

TacticalUI Kill Counter Lets you see how many enemies are still active so you don't have to remember them all. After you build a shadow chamber, also lets you know how many are inactive.

Yet another F1 Lets you press F1 to see very detailed information on your target.

Note You can find previous versions of the LWOTC mod here.

You will encounter problems in the game. There are known ones already. If you would like to report an issue, please follow these steps:

If you're having problems starting the game or a mission, try clearing your config directory (Documents\My Games\XCOM2 War of the Chosen\XComGame\Config) and moving your profile.bin file out of the SaveData directory (which is next to the Config folder)

Check out the Troubleshooting guide for more advice.

Create an issue in this GitHub repository if you're still having issues.

Attach a zipped save file that replicates the problem if possible. If you have an autosave, please load it and then save it explicitly with an meaningful name.

Provide as much information as you can, including what other mods you have enabled, the steps that reproduce the problem, what the impact of the problem is, and so on.

Files for XCOM 2: War of the Chosen