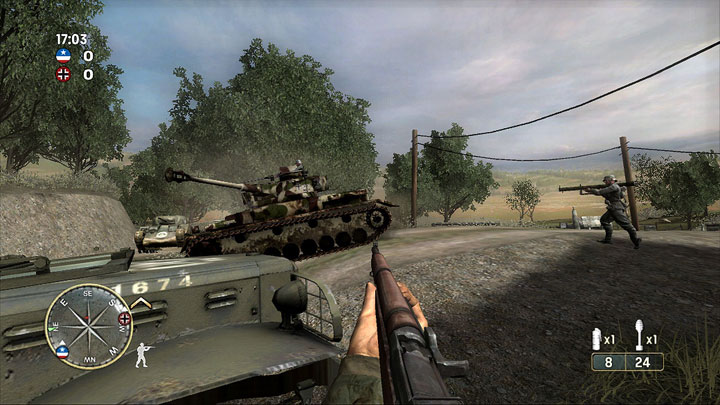 CoD 3 Mouse & Keyboard controls for Dolphin and QTE Fix is a scripts by deton24, allowing you to play with good keyboard and Mouse controls in Call of Duty 3 (Wii version) emulated on PC through Dolphin emulator.

and paste it in My Documents \Dolphin Emulator\Config\Profiles\Wiimote.

Or place the text into notepad

Then go to options, controller settings, emulated Wii remoter, configure, and load the profile from the list.

Go to the game options when the game level is loaded, so press, in this config Backspace, and turn off dynamic aiming, then set the sensitivity to the max. Back by pressing R. You can turn on subtitles there.

For language change, add the path for ISO in the config, and when youll see the game on the emulator list, press RPM>properties>Info. In game config you can set Video Rate Hack to X2, to unlock 60 FPS. Just remember to save the game state in emulator while using 30 FPS, because there will be sound bug. You can also turn off Skip DCBZ clearing and Synchronize GPU thread. Disabling dual core caused some FPS dips at the beginning of chapter 2 (the most demanding place in the game IMHO), but it helped someone before for some performance issues, so check it (boot the game again after changing options there).

Beside the controls, nothing should be changed in the emulator in order to play.

Maybe only change native resolution in graphics settings, enhancements, into at least 3x, or force 16:10 in aspect ratio, and widescreen hack in next bookmark for 16:10 display, or stretch to window if you possess other monitor like 21:9 (maybe it will work like for 16:10). MSAA crashes for me.

Setting above 3x resolution was too demanding for me hardware, and it affected aiming, even when there was 30 FPS.

In config, advanced, do not turn on clock override  causes aiming problems.

The same goes for per-pixel lighting.

If you encounter occasional freezes during gameplay, change renderer to OpenGL (but its slower in demanding places). The problem in other titles seems to be fixed with synchronize GPU thread option turned on, but here it does not help on Vulcan or DX11 (AMD GPU).

Generally, among others, Vulcan added in Ishiiruka Dolphin works the best:

If you press ESC during emulation, and everything freezes without confirmation message, just press enter - the game will exit.

I still didnt get rid of one problem. There are few certain stages in the game (QTEs) when you need to use Wii Remote and Nunchuk in order to plant the bomb, turn the valve etc. I dont know how to pass such places, and how to set binds in order to activate the proper key.

If no one comes up with a better idea, download the 100% from here:

Go to Dolphin->Tools->Import Wii Save.

Now you have an access to all game levels in the main menu.

Settings shake for the same key for nunchuk, and different same key for shake in motion controls and IR as suggested in other game, do not fix the problem for me. Once when I messed with the controls, pressing middle mouse button helped, I even saw how the character broke the valve, but maybe after re-launching the game, or/and on a different stage with different QTE, I couldnt use that trick anymore, even in the same place with vault. Strange. I tried also to bind different keys for these to shake options, but no success. "Swing - Forward" or "IR - Forward" didnt do the trick for one guy either.

If you have powerful enough computer, you can disable half audio rate in-game options for better audio quality. I recommend turning on Dolby Pro Logic in Ishiruka Dolphin, especially on headphones.