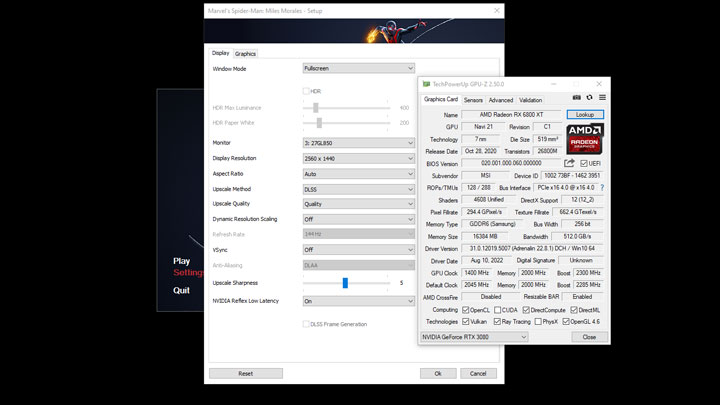 DLSS Unlocker for all GPUs including AMD Radeon (FSR/FidelityFX Super Resolution mod) is a mod for Marvel's Spider-Man: Miles Morales, created by  Goghor.

This mod is based on the original CyberFSR for Cyberpunk 2077 made by PotatoOfDoom1337, original source code of the mod is available on GitHub.

This mod attempts to replace DLSS with FidelityFx Super Resolution 2.1.2. The mod is still in development, but early results are already quite impressive.

CyberFSR was originally made for Cyberpunk 2077, but apparently it can be used on any games which has DLSS support. Thus I forked the project and also included an injector to disable Nvidia RTX GPU checking to make DLSS option available for any GPUs including Intel onboard GPUs LMAO.

This mod is compatible with any AMD, Intel, and Nvidia GPU that can handle Spider-Man Miles Morales.

Marvel's Spider-Man: Miles Morales has built-in FSR 2.1, then why this Mod?

Native FSR 2.1 implementation on Marvel's Spider-Man: Miles Morales is not so good, this mod even though it contains FSR 2.1.2 codes it's giving better result than native solution.

It also unlock Nvidia's pseudo DLAA (FSRAA) which is superior to any other AA methods.

How does this work?

Both FSR 2.0 and Nvidia DLSS are temporal upscalers and work (except for some minor differences) very similar. This means that both systems need similar data to work. Luckily, NVIDIA publishes its DLSS implementation as a dynamic library (a dll file). This allows us to simply replace the DLL in question with our own version that is able to translate NVIDIA DLSS to FSR 2.1 commands. API reimplementations like Wine or DXVK work in a similar way.

Extract the Archive into the Spider-Man Miles Morales folder so that the nvngx.dll, nvngx.ini, and winmm.dll is in the same folder as the main EXE file

Launch the game, go into the graphics options and select a DLSS setting

Note: an analogous mod is also available for Marvel's Spider-Man