I grew up during they heyday of RPGs, when Baldur's Gate 2 reigned supreme, Fallout was considered revolutionary, Planescape: Torment caused tears and then debates, and Icewind Dale was treated as the light interlude. My love for such games was reinvigorated with the renaissance of the genre founded by Pillars. And yet, now that I played Encased, I couldn't find it anymore. I couldn't focus on the game, which after a few hours proudly continues the tradition of Fallout, Wasteland and Atom RPG. I speak for myself, but I have concerns that this is a phenomenon symptomatic of a certain generation of gamers. It's possible that we've burned out, that we're being horribly spoiled by the titans of the genre. I sure am.

I launched Encased the same way you try a tailored suit. Seemingly new, but instantly a great fit. The stats are called a little differently than in S.P.E.C.I.A.L.; there were a few diversions, but after a while I already knew what kind of character to assemble so that it would function similarly to how I did it back in the days, when war didn't change. The problem is that after assembling this character, I felt no excitement. And it's definitely not the game's fault. 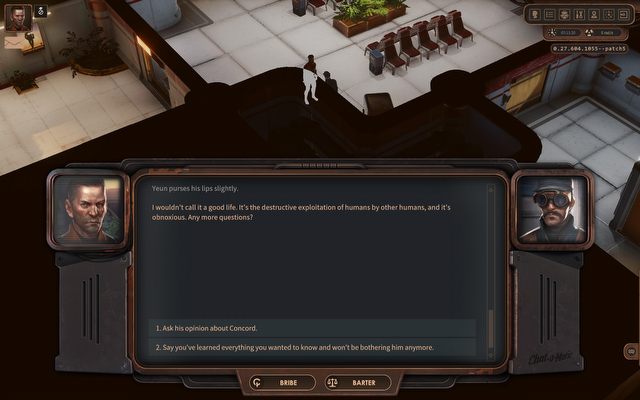 It has everything an RPG should have. A ton of stats, freedom of exploration, and problem solving that comes already in the prologue. You can see that we will be able to go wild and find out-of-the-box solutions to problems. Suffice it to say that I could leave the location from the prologue in agreement with the principals of the outpost or  let's say  on my own terms (with proper investment in stats). Tactical combat is fine. The graphics and animations are also good, though they don't blow your socks off. They don't have to. Voice over is certainly missing, but that will appear in the final version. Setting on the frontier of SF and postapo also delivers. It's a combination of Fallout, Stalker, Metro, and Damnation Alley, with echoes of the movie Annihilation. Well, it works.

And yet, not as effectively as it used to. Part of this is due to the fact that I couldn't hear the dialogue, and the world and plot, while suggesting complex social issues in a slightly satirical mantle, are  at least at first  presented a tad too politely. It's far from the fallout madness, which hits you right in the face from the get-go, and then kicks you on the ground, laughing maniacally. Things pick up after the prologue, but even then, I couldn't shake the feeling that Encased's devs could do little about it.

It just doesn't impress me anymore. I think I got burned out. I love the genre, I'm waiting for Baldur's Gate 3 like it's salvation. So much so that I couldn't help it and launched the early access version for a few hours. But it's precisely the behemoth games produced by studio Larian that are part of the problem. They spoiled us like grandparents with candy. 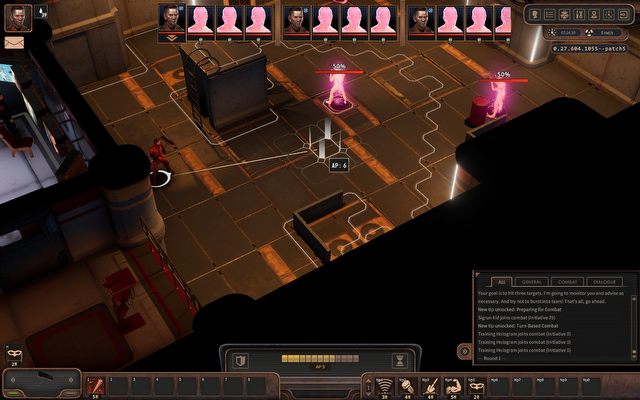 They're getting closer and closer in quality to Dragon Age-style super productions. Yes, Divinity: Original Sin 2 did let go of some elements (the cinematic dialogue animations), but it neatly covered it up this with quite spectacular combat, characters jumping around the map like Mario, awesome magic effects and interactions with the environment, location design and great voice acting. Baldur's Gate 3  although more conservative fans are annoyed by it and reject it  is BioWare-level, with lots of bells and whistles, graphical details and gimmicks that no one can afford, as Larians has broken the bank, and now the players and Wizards of the Coast trust them completely.

These games spoil us (which is good!), pleasing our eyes and ears. They stand as close to AAA experience as they can. At the same time, they remain faithful to RPG traditions, with a lot of dialogue, statistics, tactical challenges (unless you play on easy difficulty level). The point is that they set standards that no one else can meet. Larian was the only one to come out of its niche and manage to hold on, while the rest are idling in the medium-power corner. And there's no way to get out of it, because every RPG is an investment of power and attention for the player, consuming many hours, and except for fans of particular themes (postapo, cyberpunk, SF) hardly anyone can afford such an experience.

Because against this backdrop, the excellent productions  such as Atom RPG or Encased  come out simply poor. Like shy, slightly malnutritioned cousins. They're smart, you can tell, but they lack the feistiness necessary to survive. They don't provide a sensory experience on par with what even isometric RPG lovers are slowly becoming accustomed to (and they used to be satisfied with the gimmickry of energy flare spell effects from Planescape: Torment). Sure, it's often hardcore players eager to creep through walls and walls of text, but even they will eventually give in, if maybe a little later. They will reach for more and more advanced games, because time is getting shorter, and the best games have probably already been completed. 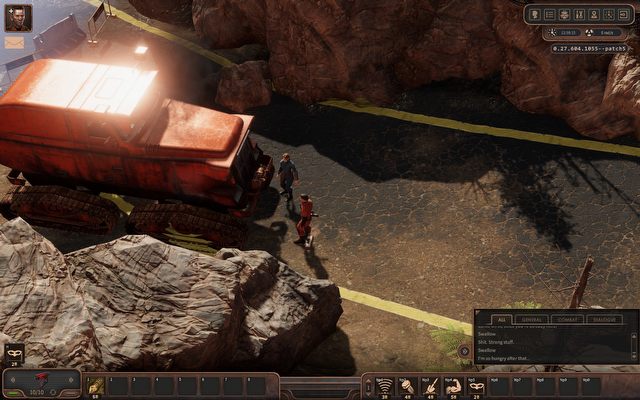 It's also a matter of  my perception included  general media saturation coming from apps, computers, smartphones, socials. From everywhere. I don't know about you, but I find it increasingly difficult to focus on games like Encased or Disco Elysium, where modest and elegant animations are only supplements that slightly relieve the text-based narrative. After an undisclosed amount of hours at the computer, I can feel so tired that rather than go for round two with walls of text, I prefer to read a book, which is much simpler to use.

I'm just afraid that the genre that raised me, and which merely 5 years ago was returning in full glory on the backs of Pillars, Wasteland 2, Shadowrun: Returns, and Divinity: Original Sin, may be fading into a niche once again, from which it will not recover soon  if ever. Let me remind you that Obsidian miscalculated it already with Pillars of Eternity 2. The game reaped high scores, also from me, but sold below expectations. It was too traditional and conservative, though very beautiful. In other, better-holding genres more accessible to the casual gamer, that's not a problem, but in the case of isometric RPGs, it's death. 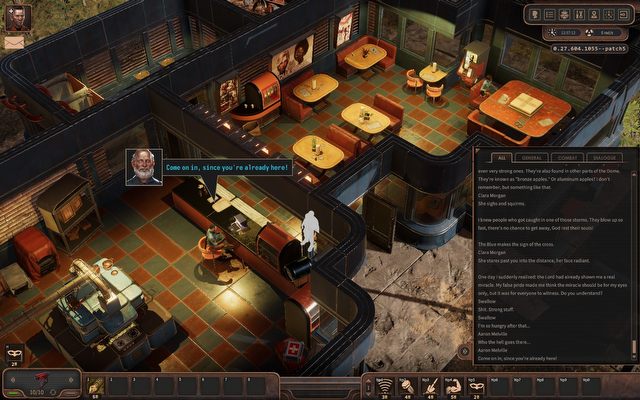 Enthusiasts of this type of games are simply fewer and further between than ever. We are tempted by other pastimes, we start families, we reckon with time and money, we chase ambitions. Or we just don't get excited with another Fallout clone, even if it's outstanding. RPGs are respectable on the one hand, but on the other  aside from the few gems mentioned above  they tend to stick to their, quite ancient guns, and fewer people have patience to cope with that. And be warned, Encased follows the very same formulas. With all its fine-tuning, thoughtful, attention-demanding world, and old-school charm, Encased may not find bearing in this new reality. And with it, other cool, upcoming games may go unnoticed, forgotten or abandoned after a few hours of gameplay.

The kickstarter wave has already passed, with only the strongest remaining on the battlefield. The smaller ones (the creators of which have probably not defined the audience precisely enough) are still trying and there are a few more interesting productions coming up  like Gamedec, the second Pathfinder or the more arcade-like Alaloth: Champions of the Four Kingdoms. Each of these promises to be great. However, if RPG veterans are feeling fatigue like me, there may not be too many people to play the upcoming works. If there is no one to play, there will be no one to pay, and as a result  there will be no one to create in a few years.

And the teenagers who still have the time? I think that even if they're interested in the genre, they'll reach for the louder titles first, like Divinity: Original Sin, the upcoming Baldur's Gate 3, or the hybrid Dragon Age, which admittedly doesn't know what it is anymore, but it at least started out as the heir to the Baldur games.

Maybe it's just that the heat really got to me for the first time in my life 9because it is unreasonably hot lately) and Encased just hit a bad moment. Or perhaps we as gamers are changing irrevocably, and this is the next genre to share the fate of RTS? Maybe we only need a single champion every five years? And for all my affection for the game, I don't think it's Encased.

I'm sad. Encased is the kind of game that, in theory, I'd like to complete "from cover to cover," but I just can't. I don't have the strength right now  I'm probably not the only one  bigger and stronger competitors are about to appear. Since I spent some really enjoyable hours with this title, I hope I'm wrong though.