It's hard to call the Star Wars movies very logical, original, or realized with particular taste. There's plenty of quirky motives, plot holes and other anomalies. However, the entire storyline from episode I to VI has its irresistible charm and makes a certain kind of sense. It's a poorly filmed, albeit beautiful story about lust for power, about family, love, and the struggle for freedom (of which I am a great proponent, I should add). Lucas' work has developed a serious disease over the years, however, and it's good news that Disney decided to treat it.

Expanded Universe, today officially called Legends, began with a novel (if you can call this a book of barely 200 pages) Splinter of the Mind's Eye. It was published a year after the release of A New Hope (i.e. in 1978) and if the film didn't turn out a hit, it could have become the basis for the script of a low-budget sequel.

If that had happened, today Star Wars would have become the so-bad-it's-good kind of franchise. In Splinter, Luke and Leia crash on the planet of Mimban and are persuaded to undertake a search for a crystal that "focuses the Force." In the end, they both fight Vader (yes, Leia is fencing with a lightsaber), and the fearsome Sith almost wins that fight, but he falls into a well. The premise might have been alright, but the writing was bland, rendering the whole very undramatic. Getting through the book, I yawned and snorted with laughter as I stumbled upon yet another folly. I should add that I read the book still in high school, when my margin for kitsch and trumpery was much wider.

Splinter of the Minds Eye was released in 1978, and you can still get it. But be warned: this is only a good idea if youre planning on getting high and reading it out lout to your friends.

That book was bad, but what some other novelists have done in the Star Wars universe was a lot worse. Perhaps the peak of exaggeration was reached by Kevin J. Anderson and his Sun Crusher spaceship.

The Death Star was a behemoth, operated by hundreds of trained engineers (don't forget plumbers and all sorts of contractors), capable of turning an entire planet into dust. Sun Crusher was the size of a large fighter, operated by a single person, and able to destroy stars and all the planets orbiting them. This was achieved by a projectile that penetrated the outer layers of a star and caused a supernova explosion.

But there's more. The ship was protected by armor so powerful that it could withstand a laser hit from the Death Star and ram any ship freely without even scratching the paint.

I should only add that as the result of various, rather outlandish circumstances, the fighter was destroyed inside a black hole, having survived a visit inside a core of a gas giant. 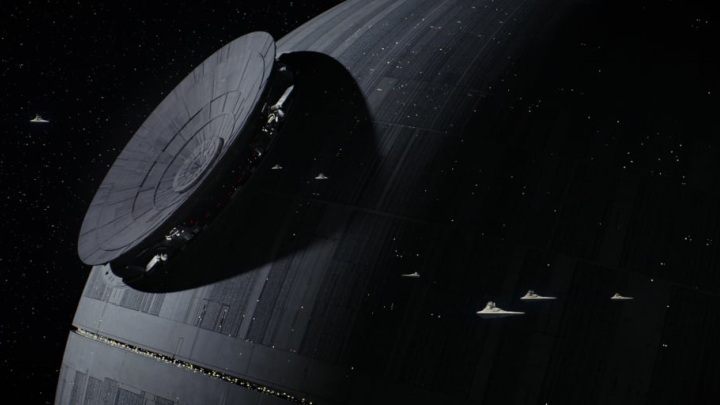 I mean, the Death Star already possessed absurd power. The authors of Expanded Universe have taken the concept of OP'd super weapons much, much further.

Disney made a good decision by erasing the Expanded Universe, but then fell into bizarre exaggeration. While the Death Star, especially such as the one portrayed in Rogue 1, was a terrible symbol of the power of the Empire, the Starkiller base from the new trilogy seems a caricature, and an overkill. I won't try to discuss laws of physics in the context of Star Wars, because that's just nonsense, but in this case, I'd really like to.