The game's plot touches on the themes of evolution of the human race, time travel, and the so-called "connection" which will attempt to redefine the nature of defeat and death in video games. The title "Death Stranding" refers to an actual phenomenon observed among marine mammals, and scientifically known as "Cetacean stranding" (aka beaching), whereby some whales (sometimes voluntarily, including for hunting; sometimes not) become stranded on the beach, which can lead to their death.

The story told in Death Stranding may be close to a TV series titled Rain, where seemingly ordinary rainfall is the carrier of a deadly virus. In Death Stranding, one of the hazards should be a phenomenon known as Timefall  the rain takes people to a different point in time. Or rather  speeds up time, leading to much faster aging of not only people, but also plants. However, the protagonist will be affected by it differently than other beings. 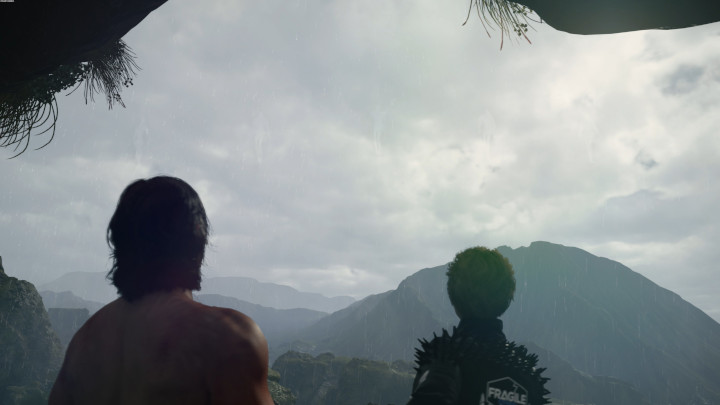 So, Timefall will be one of the main hazards.

The setting is the United States after a mysterious disaster. Sam, the protagonist, is a courier, who specializes in delivering non-standard cargo. The government of his country, the UCA (United Cities of America), is trying to unite the society again and restore order, but not everyone wants that. Apart from the separatists from the Homo Demens group (led by the demonic character named Cliff), there are the mysterious, invisible creatures that reveal themselves in the rain. Sam, thanks to the capsule with the Bridge Baby (vel BB), has a unique ability to feel the presence these dark, dangerous creatures. The BB can also take him to alternate worlds, where he will have to fight for survival.

The materials released so far suggest that questions regarding life and death will be the focal point of the story. On the one hand, we have the humanity, able to resurrect the dead using advanced technology that applies the Big Bang theory and the properties of black holes, and on the other  the mysterious, dark creatures with the ability to control the dead and absorb all life.