To illustrate what I mean, we have to go back in time to May and June of the year 2015. Like many of you, I was just finishing The Witcher 3: Wild Hunt, and like a lot of players, I was delighted with the game by CD Project RED  appreciating, above all, the well-designed quests, the way they intertwined with the main plot, and the phenomenal atmosphere and setting. I also enjoyed the gameplay, especially the simple, yet quite spectacular combat system. At the same time, however, I could not shake off the impression that in some respects, the developers went a little too deep into old-school RPG mechanics.

The Witcher 3  what could have been done better?

I always thought (and I still do) that the creators could have went for some ideas that could seem a little bit out there, but would certainly made the game better. For example, the experience levels. For me personally, these arbitrary numbers next to opponents' names only spoil the immersion  I don't understand why a level-1 bandit does not pose any challenge to Geralt, while a level-15 bandit equipped with the same items and  what's important  fighting in the same way as the former, is already a tangible a threat. 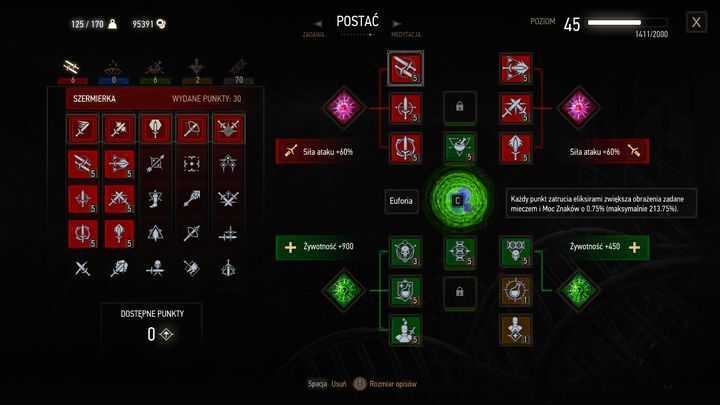 The character development in The Witcher 3 was... well, it was.

I also don't like the overly orthodox approach to character development and progression as such. With skill points, we buy a whole bunch of boring bonuses like +5% to quick attack damage, while the things that actually affect how you play The Witcher 3 are also in the development trees, they are very limited  modified versions of signs that sometimes cause a drastically different effect, two interesting special attacks, blocking arrows, and a few time-slowing effects. What's more, some really interesting abilities require a large number of points (e.g. the whirl), and the limited number of bonuses we can use at any given time, makes it difficult to build a character with more than a few cool tricks at hand. There are many incentives that make me go back to The Witcher 3: Wild Hunt, but building Geralt's skills was never among them.

The biggest offense, however, was the inventory  a whole range of different types of armors and weapons can be found in the game, but 95% of them are pure garbage, useless scrap metal! The only gear were interested after 5 hours of gameplay are elements of the witchers gear we find in scavenger hunts. There are a few exceptions to this rule (e.g. some unique weapons  such as Olgierd's sword  are suitable for use over several levels, but in fact they only confirm the rule).

Okay, but how does Ghost Of Tsushima fit into all this? It's simple. Playing the new game by Sucker Punch, I repeatedly caught myself thinking: "Oh, that's how CDPR should have done it." In many ways, this game resembles the work of CD Project RED. At times, they seem almost identical. A horse? Check. Multiple tasks requiring investigating clues? Check. Brilliantly animated melee combat with an emphasis on parrying and dodging? Check. Gadgets and bombs that make it easier to deal with enemies? Yeah.

Sure, Sony's new exclusive isnt an RPG and therefore does not put that much of an emphasis on the characters, plot and dialogues (which doesn't mean they are bad  to the contrary). But I bet that when looking at the average quest in both games, a layman would say they are both representing the same genre.

Except there's one but. Unlike The Witcher 3: Wild Hunt, Ghost of Tsushima has a well-balanced and smooth progression system that rewards the player for virtually everything they do. There are two types of skill points  one is awarded less frequently and allows you to unlock specific gadgets, and the other allows you to develop the Ghost himself (although, what's important, much more often their effect is clearly visible, rather than limited to boring passive reinforcement).

There are also stances  specific fighting styles  that we learn by defeating or observing enemy leaders (and then we can strengthen our skills). In addition, the game features the so-called "mythical attacks"  special abilities that are unlocked by completing a specific task (usually ending in a duel with a difficult opponent). 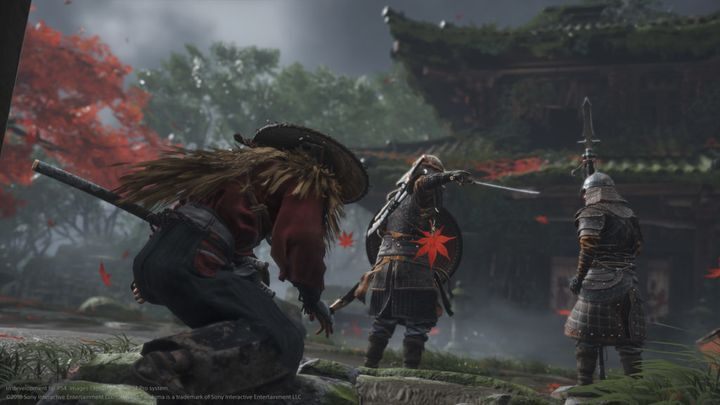 Ghost Of Tsushima also has a stealth system that wouldn't hurt The Witcher at all.

The weapons we use in the game either belong to our character  like ancestral swords  or can be acquired through a specific challenge. Each of them (well... almost) has a specific role and any one can be developed  it requires materials that we collect almost all the time. It's the same with armors  the armor is tailored to the player's style and it's a good idea to select one for a particular mission. For example, Samurai's heavy armor works well during open battles, but the Ghost armor is much better suited for sneaking and wreaking chaos and terror in enemy ranks.

Speaking of opponents: the average bandit we meet at the beginning of Ghost of Tsushima game will not have more HP than the one we face at the end of the campaign, and can always be a threat to us (though less so later in the game, as were more proficient and powerful). At no point in the game will we encounter a region or task requiring a higher level or better equipment than we have. We can go anywhere (apart from some plot-related restrictions), do anything and we will never encounter disappointment similar to the one you could feel upon entering a military camp as a level 14 witcher only to meet level 6 Nilfgaardians (interesting quests that hit us with a painful single experience point for completion, almost shouting "why haven't you found me before?!  on top of that, level progression is faster than quest progression, so its impossible to reap the full XP from all quests).

Static enemy statistics don't make Tsushima boring  quite the contrary. In the course of the game, better equipped and more effective opponents begin to appear, and they differ from the earlier variants not only in the resilience and amount of damage they can deal, but also with the skills and gadgets they use. Regular archers become able to shoot three times faster, and they can use both poisoned and flaming arrows. Powerful warriors with two-handed weapons are accompanied by similar enemies with bombards, while swordsmen are accompanied by Mongols equipped with two one-handed weapons or two-handed sabers. 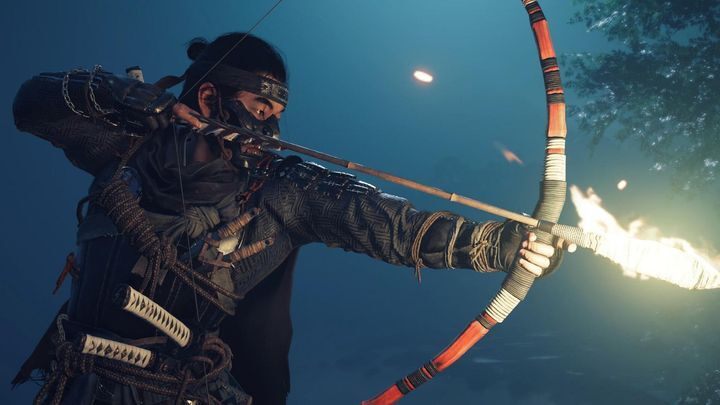 Flaming arrows are just one of the gadgets you can use in Ghost of Tsushima.

In Ghost of Tsushima, both the protagonist and enemies are constantly changing, but all of this happens in a smooth and organic way. It doesn't disrupt the immersion and doesn't artificially block the ability to explore the world.

A chance for The Witcher 4?

To be honest, I hope that the developers from CD Projekt RED will take some of these ideas to heart when working on The Witcher 4, which will be announced sooner or later. Statistics, numbers, and other old-school RPG mechanics have their appeal (especially in isometric games such as Pillars of Eternity or Pathfinder: Kingmaker, of which Im also a big fan). However, I think that in a game as heavily focused on action and immersion as the last installment of The Witcher, you might as well abandon some of these and reach for something more compatible. Ghost of Tsushima shows that this works very well.