The choices we speak of are not dialog choices, of course. There's no conversation choices in the game to begin with, and the story is more diluted as a cup of milk tea. But what we can choose is the way we want to play Ghostrunner.

Let's start with the opponents. In the game, we have only one weapon available, and yet almost every encountered enemy can be defeated in a range of different ways, and a different way will be optimal for each player. How do you deal with a robot that generates a wide shock wave? You evade it with a quick upward dash. You can also jump, and then slide under the wave traveling a little higher. Another possibility is deflecting the attack towards the enemy, or simply hiding behind a wall, then finishing the robot with a rapid cut before it even has time to deliver another attack. Similar choices apply to even the simplest, soldiers using regular blasters. Anyway, you have to see for yourself.

But this is not the end of our decisions. Every scuffle in the game is a kind of jigsaw puzzle, and it is up to the player to decide the order and fashion in which it should completed. Kill the drones flying over the battlefield first, or maybe get rid of the dangerous cybernetic ninjas? There's no wrong answers. I often had the impression I was completing the game the way the developers intended, just to watch a stream, where people were completing the stage in a completely different manner. The way that seemed most natural to them.

On top of that, we also have a character development system that provides even more leeway. This game doesn't use skill trees (that I personally abhor) that limit your possibilities with every choice. Instead, we get a dozen different upgrades, a slot for a few of them, and the ability to change their combination at any given time. Feel like you'll get the best results by deflecting enemy missiles? Well, you can simply select the upgrades that enhance this particular skill, and you're all set. 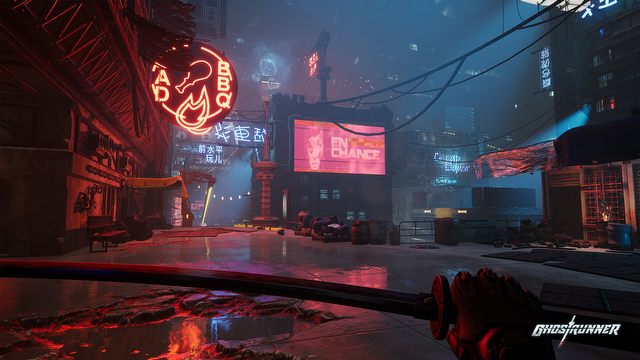 Games are an interactive medium, in which the interactivity and freedom of expression (even in combat) should always come first. Unfortunately, the creators of linear games too often try to limit our expression. They do it by using limiting, narrow paths, bending over backwards to make sure we don't miss any scripted sequence.

Even role-playing games suffer from that, in spite of being the productions, which theoretically provide us with the most freedom in following our preferences  the best example of that are all sorts of "spy-visions," "eagle-eyes," and "witcher senses." Opponents with a single weak point, and thus only one correct way to defeat them. Chasms created in such a way that they can only be jumped with one particular skill.

Games are designed that way because it's the easiest and safest solution. If we give the player too much leeway, they can spoil something and play our game not as intended. My favorite games are those, in which we can use a variety of tools to overcome the obstacles before us, whose choice depends exclusively on our creativity, and knowledge of the mechanics (not to be confused with exploits). Designing a linear game with such range of choices isn't easy, but these games are significantly more satisfying. This year, I experienced that with games such as Ori and the Will of the Wisps, Doom Eternal and Ghostrunner. What are your favorite examples of linear games providing huge leeway? Or maybe you prefer games using a rail construction?