We're now well into the pre-release marketing buzz heralding the upcoming new game by Quantic Dream – Detroit: Become Human. Sony's been teasing new clips from the game since some time, PS Plus has lately enhanced its offer with Beyond: Two Souls, and the recently released demo of the new game presented pretty impressive possibilities of the short, story mission to branch out into numerous, nuanced variants. I myself have admittedly fallen for it – I was really looking forward to experiencing the decision making in the full version of Detroit. But then I remembered to keep the hopes high, but expectations low, because let's face it: David Cage isn't a visionary in the pure sense of the term, and his status in the industry really seems exaggerated. Do you need proof? How about two decades without a game with a really compelling story?

If you've yet to play Fahrenheit, Heavy Rain or Beyond: Two Souls, bear in mind that this article contains some major spoilers from all three games.

The following text isn't aiming at neutral objectivity – rather, it presents the author's opinion regarding the subject matter. 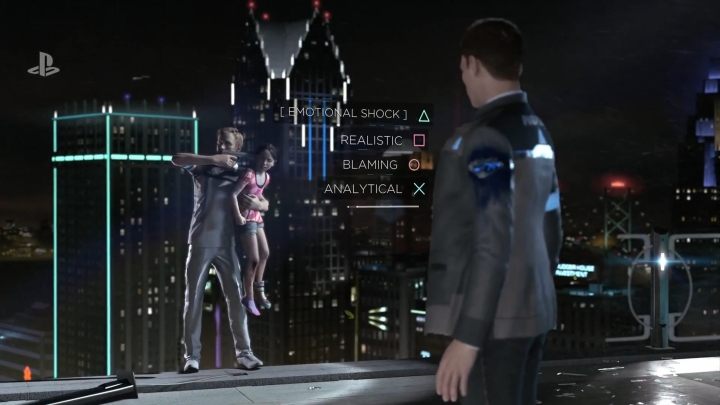 Detroit is the biggest release of the month for Sony and a potential hit. I'm afraid, though, that the story will be worthy of a B or C-class movies.

David Cage and his Quantic Dream debuted on the market with now-forgotten (and at the time of its release popular mainly due to the collaboration with David Bowie) Omikron: The Nomad Soul from 1999. It wasn't until six years later that the man and his team really became recognizable across the world of video games – thanks to Fahrenheit (in the States known as Indigo Prophecy). I admit I've never played Omikron and so, giving Cage the benefit of doubt, I'm assuming the story there maintained a satisfactory level (though it sure wasn't his opus magnum) and I'll begin with the loud, 2005 release instead.

Fahrenheit's opening was really something. The protagonist loses control of his body and murders a random customer of an obscure restaurant somewhere in a big metropolis. Coming back to senses, he has to hide the body, mop the blood and exit the restaurant before the policeman at the table finishes his coffee and decides to go to the loo. Lucas, one of the protagonists of the game, then begins his struggle to uncover the truth and avoid getting caught. The exciting beginning develops into a dark crime story with a supernatural addition of paranormal activities, during which we control four different characters central for the story that can be drastically altered depending on our decisions. The action slowly proceeds, uncovering new elements of the mysterious puzzle, allowing us to get to know the characters better and accompany them during mundane activities that increase the immersion. 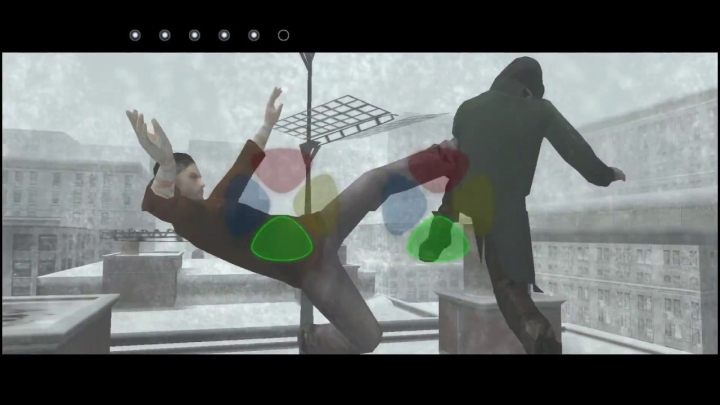 Nothing does such wonders for a noir story, as a Matrix-inspired duel…

And then it all went to hell. The finale of the game – or even its last quarter – feels like ordering smoked salmon and getting a Happy Meal without a toy. The quiet, slow and mysterious game turned into hard-boiled sci-fi nonsense. It looked as if David Cage had woken up one day during the production of the game and said: "Alright people. Let's see how many awkward plot twists and how much insane action can we pack in here before wrapping up the production." The gloomy crime story turned into a complete mess: fight scenes transplanted from Matrix; an A.I. vel Old Lady aka the Internet attempting to take over the world; saving the planet from eternal frost.

Since the game was overall considered a success, I can believe that there were people, who genuinely enjoyed it from beginning to end, with all its bizarre twists. I, however, felt as if Chuck had given me a good old spinning-back. Till that point really engaging, the story was stripped of all its charm, and every subsequent twist in the plot made me care less and less about what was going on in the game. When it was finally revealed that I was controlling a zombie for the majority of the game, my only reaction was a prolonged yawn. The sex scene I witnessed, in which one of the engaged parties was the abovementioned zombie, was pure cringe. 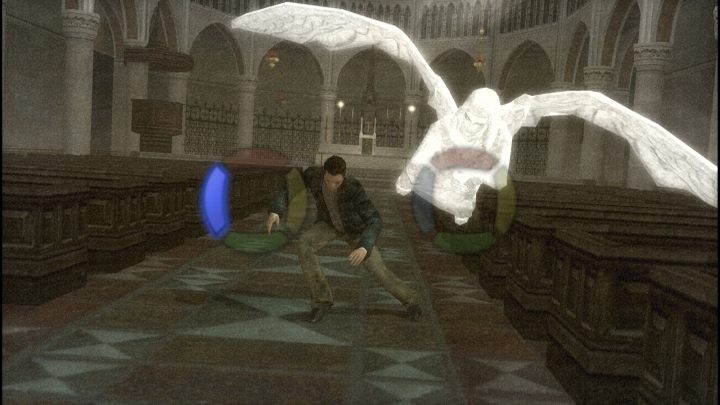 …Apart from the attack of an Archangel from hell!

Truly, I cannot recall another game that I would enjoy so much – which I would find as impressive as Fahrenheit for the majority of the storyline – just to be utterly disappointed and enraged at the thriftlessness with which all the potential was squandered. Fahrenheit was my first encounter with Cage's output, and I instantly had a hunch that something's off about that man's reputation.

What's up with the Origami?

Heavy Rain, the next project by David Cage realized by Quantic is so far the greatest success the studio had – both in terms of sales and ratings. And while in case of Fahrenheit I was rather surprised that so few people called the game's plot nonsense, it made more sense with Heavy Rain.

That's because the game was definitely more consistent. The plot was, from beginning to end, a down-to-earth, emotional crime story, embellished with stunning visuals and amazing nonlinearity, which even today makes Life is Strange or any of the titles by Telltale Games boil with envy. As long as you were just absorbing the game without paying attention to details, Heavy Rain and the story of the father desperately trying to save his son was really impressive. Only after dissecting the plot could you notice that the plot holes are the size of the Vredefort Crater. 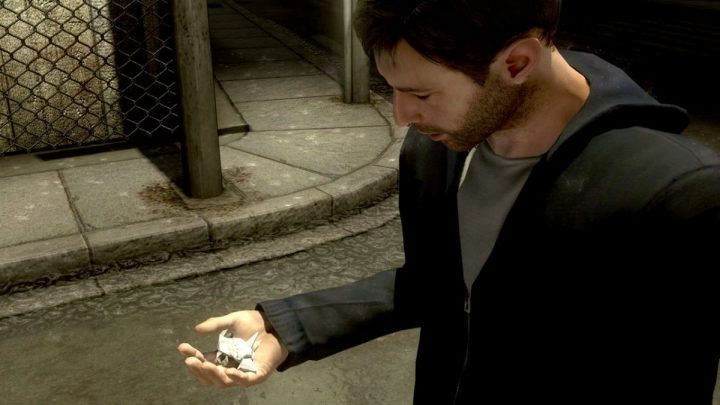 How did Ethan get the origami? Apparently, David Cage came up with a mystery so great even he doesn't know the answer.

For the majority of the game, Ethan (the father), seriously considers the possibility of being the origami murderer himself, killing boys during his blackouts. Speaking in favor of this theory are the numerous gaps in his memory, followed by him waking up in weird locations, as well as the fact that he often comes across the origami figures – the signature of the killer. While this would make perfect sense, it eventually turns out that someone else is the real killer, and the game doesn't get out of its way to explain how did Ethan have the origami. If you think about it, a serial killer following Ethan 24/7 just to plant a paper figure in his hand every time he passes out isn't very convincing.

Besides, Ethan probably didn't need the origami to believe he was the real killer – after all, he still considered such possibility after the trial of the lizard, when he had to cut part of his own finger in front of a camera. Since we're at it; remember the butterfly trial? I really can't imagine a guy the size of Shelby spilling shattered glass in a vent shaft without hurting himself or getting stuck.

Much can be said about the policemen investigating the case of origami killer, but certainly not that they're competent. They don't seem to care about collecting any evidence linked to the genocides (which allows Shelby to get it from the families of the victims), and they're not shy of publicly accusing Ethan of being responsible for the killing, despite having no other proof than the testimony of his wife about his blackouts and the information they've extorted from his psychologist. They're not particularly worried that someone helps Ethan out of the jail after Jayden, one of their colleagues, clearly states at one point that he's going to do exactly that – still, he's not kept away from the case after that happens. 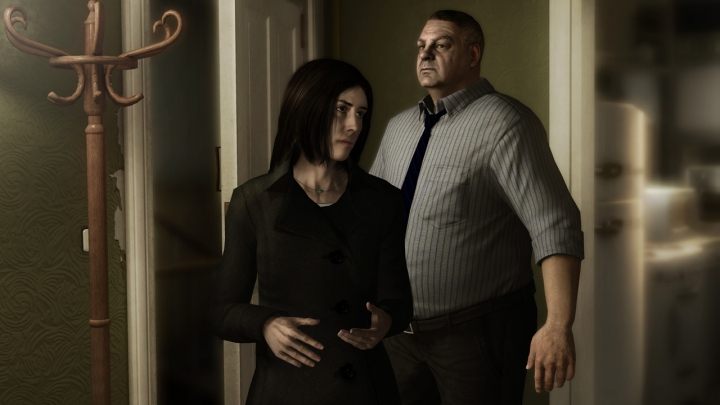 Shelby is very dedicated to proving that he's really chasing the murderer. So much in fact that he rats himself out to the police!

That's just the tip of the iceberg – let me also mention Madison, who looks utterly terrified after learning the identity of the killer, despite the fact that it was a man she had never ever heard of. Heavy Rain is full of plot holes like that, and while you can turn a blind eye on most of them during the first playthrough (if you only don't think about the logic behind the characters too much), it's arguably hard to take a closer look at the story and not feel that the game is just cleverly concealing a thoroughly simplistic and daft, C-class story.

Contrary to Fahrenheit and Heavy Rain, Beyond didn't meet with a particularly warm reception, being one of the greatest disappointments among the PS3 exclusives released by Sony. Chopping up the story and presenting it in a nearly random, unchronological order made it seem much more linear than in the two previous titles, and the story itself turned out rather shallow and painfully formulaic (note the pattern emmerge). 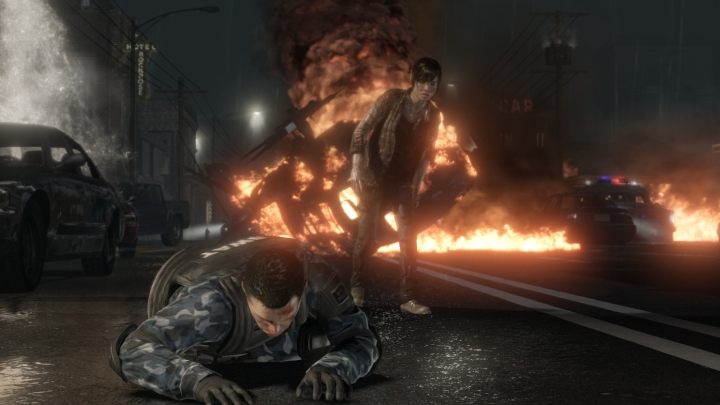 Jodie's story is simple, banal and schematic. Don't be fooled by the unchronological camouflage.

The fortunes and misfortunes of young Jodie and Aiden – the "ghost", who always accompanies her – spans twenty years and strikes chords that we're all too familiar with, in a way we've seen a thousand times before (and which we could recently see again – only executed more skillfully – in Stranger Things). But this might have helped Cage in creating a game, which – despite being pretty dry and unimaginative – was coherent and void of ill-conceived plot twists or any major plot holes (there were still quite a few minor ones). However, the question whether the solution to the problem with creating good stories lies in maximal trivialization thereof, accompanied by the most cliché of clichés, remains a rhetorical one.

So, out of the three games, one had a completely misfired finale, the other – some gigantic plot holes, and the third suffered from a depressing mediocrity of the presented story. That doesn't sound like the oeuvre of a master story teller equal to Hideo Kojima or Chris Avellone. It's a great and perplexing paradox that Cage's games, which are entirely story-based, can be so successful if it's exactly the story that's their weakest link. 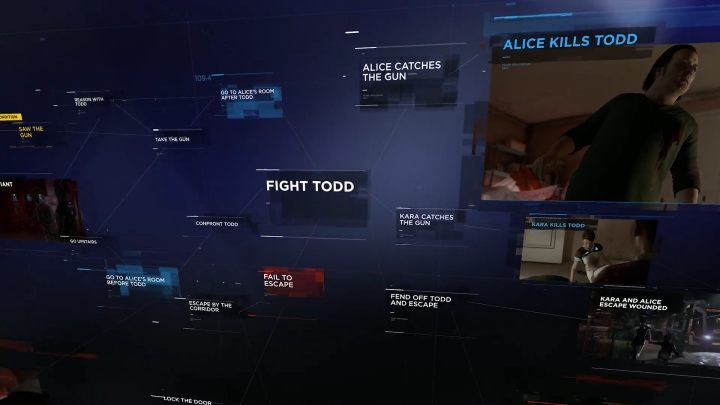 Detroit is supposedly going to have us stunned with the amount of possible ways the story can unfold – the question is whether any of the storylines will make sense.

The upcoming Detroit: Become Human, which is right around the corner, is probably most closely related to Heavy Rain – the story will be told from the perspectives of three different characters, and nonlinearity is going to be a core feature of the game. I don't doubt that Cage will indeed manage to create a game, in which our choices matter. I'm only afraid that he may, once again, deliver a game, in which the story doesn't hold water under a closer scrutiny... Or that's based on cinema conventions harking back to C-class movies. As was the case in, you know, all of the previous games.

Naughty Dog apparently wants to redefine the visual fidelity of videogames, showcasing at E3 an astonishing level of detail in their newest production… and triggering a narrative dissonance more powerful than ever before.