I am a child of the 80s. Hear me awkwardly sigh with indifference.

As a dyed-in-the-wool member of Generation X (those born between 1965 and 1980), I am currently caught in a vicious culture war between my parents generation (Boomers) and my sons generation (Millennials). And Im here to tell ya: us Gen Xers want less than zero to do with this feud. We just want to be left the hell alone while we watch the 21-century, retconned versions of our childhoods paraded before us almost on daily basis. And  truth be told  thats getting tiresome.

On some level, I get it. The 80s were rather awesome  especially from a pop-culture perspective. Just off the top of your head, how many classic films, albums, cartoons, TV shows, comics, and, of course, video games, can you name from that era? Ill wait because were certainly going to need a while. 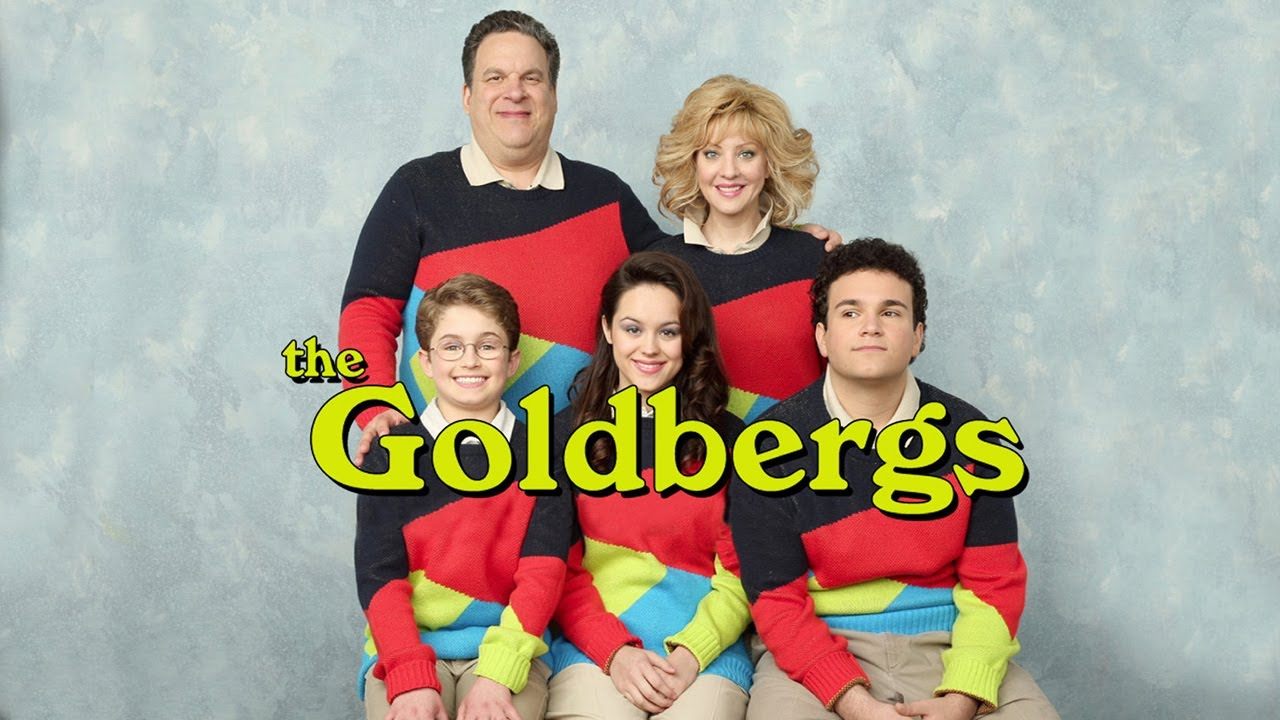 In my mind, this wave of 80s nostalgia was kickstarted by Ernest Clines 2011 novel, Ready Player One, which got a decent movie adaptation by Steven Spielberg in 2018. It was bolstered by the 2013 TV show, The Goldbergs (Fun Fact: series creator Adam Goldberg and I grew up about six miles from each other in the 80s), and was cemented by Netflixs Stranger Things which came along in 2016.

But heres the thing: nostalgia can be both excellent and terrible at the same time. Its the proverbial double-edged sword. Its excellent because it gives you the warmth and fuzzies for a bit; a wistful buzz, if you will. Its much like snorting a bump of coke (the 80s drug of choice), to fly high again, but with that buzz fading away rather quickly, leaving you feeling, well, sad and miserable. Very, very sad indeed, because it seems youll never feel that good again until you get another hit. And thats when the madness takes over. Body dont wanna quit, gotta get another hit, the late, great Prince Rodgers Nelson once sang on his classic 1999 album.

And for me, the recently released Narita Boy by Studio Koba is exactly that next hit in the interactive entertainment form, rather than any Peruvian powder. Its an excellent game (if I was formally reviewing it, it would be a solid 9 out of 10) steeped in 80s nostalgia. At its heart, its a Metriodvania which is a genre that, realistically, needs to be paused for a bit, but this one did suck me in simply because it does old-school nostalgia exceptionally well. So much so, that I did a deep dive on all the references (intentional or not) that I caught while playing, and heres what I noticed.

Were venturing into SPOILER territory here, so youve been warned.

The two biggest old-school references and/or inspirations found in Narita Boy are drawn from both 1982s TRON (and, in some ways, the 2010 sequel TRON: Legacy as well) and the original Star Wars trilogy. In the first place, the title screen (see below) looks very much like the original TRON movie poster that what plastered all over every movie house in 1982. But it goes deeper than that with TRON, as Narita Boys overall plot borrows heavily from TRON (and Star Wars as well) in terms of themes, tone, and story beats, and many have proposed that both Star Wars and TRON are just modern re-telling of the classic Heros Journey so succinctly defined in Joseph Campbells book The Hero With a Thousand Faces.

Without spoiling every wrinkle of the story, I will say that Narita Boys writing is quite nuanced and layered, putting some really cool, technology-laced spins on the basic heros journey tropes and conveys a more satisfying narrative (in my opinion, of course) than both TRON and Star Wars (A New Hope at least). 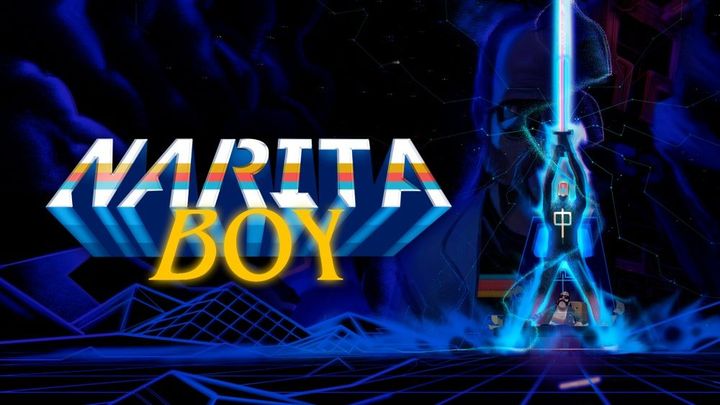 Get the Disney lawyers on the phone

Another area that Narita Boy is heavily influenced by both TRON and its sequel is in terms of the music and/or soundtrack. Its quite clear that the composer, Salvador Fornieles, who performs under nom de musique of Salvinsky, is simulating the synth-heavy sounds of both Wendy Carlos (composer of the TRON soundtrack, among others) and Daft Punk (composers of the TRON: Legacy soundtrack and electronic/dance music legends) throughout the score. The two most obvious examples of this are the main theme (Narita Boy Theme), which sounds almost like a Weird Al version of Daft Punks Get Lucky (with assistance from Nile Rodgers and Pharrell Williams, of course), and then, when Narita Boy is in on the Trifurcation path, he encounters the Synth Sensei/Bard of Trifurcation, whos music sounds quite like a lovely Wendy Carlos composition.

Returning to the Star Wars references now: First and foremost, every time Narita Boy dies, a booming voice declares, REST IN FORCE! It is also mentioned many times in the dialogue that the Trichroma and/or Force is strong in you. The Techno Sword (main weapon in the game  a sword comprised of three light beams) is clearly very lightsaber-inspired and, to top things off, the Creator (Lionel Pearl Nakamura... your father) is seduced by the dark, red code of HIM  the main antagonist of the game whos, you guessed it, quite Sith and/or Darth Vader-like. 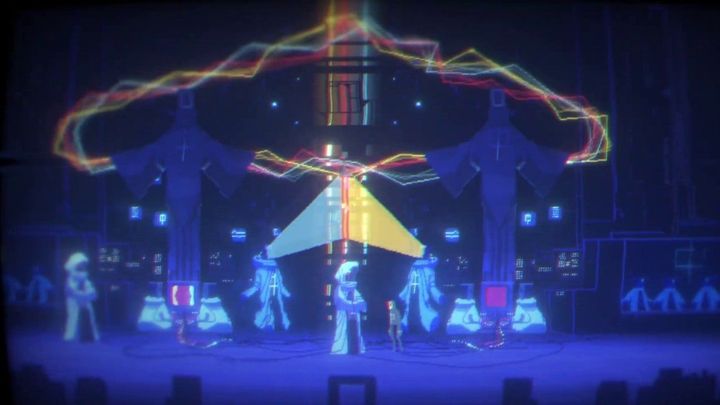 Trichroma harmony is what is all about, baby.

More (mostly 80s) nostalgic allusions I came across in Narita Boy are: 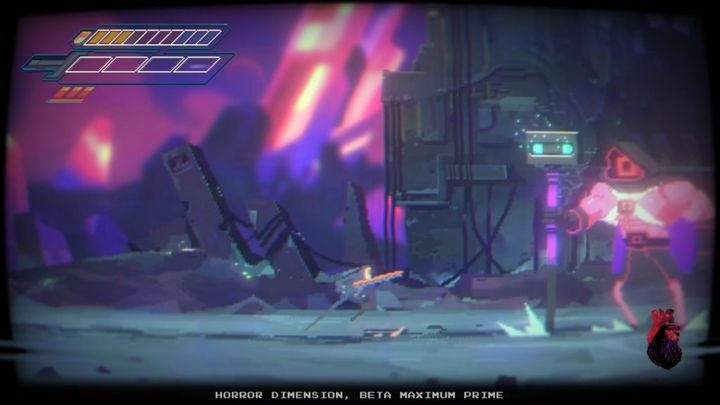 Lord VHS in all his Video Home System glory. 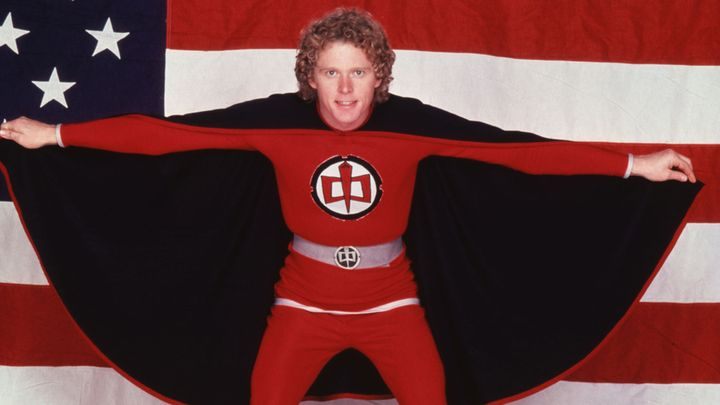 Believe it or not, Im walking on airnever thought I could feel so free 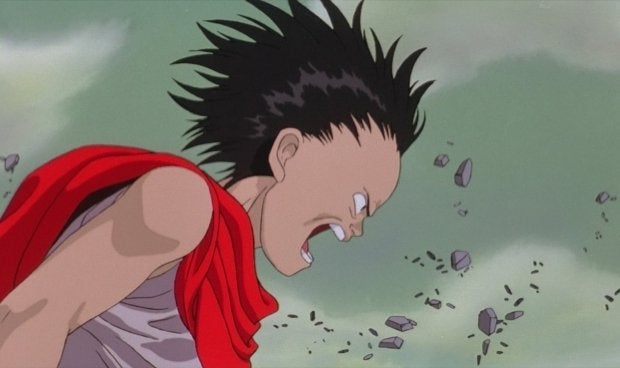 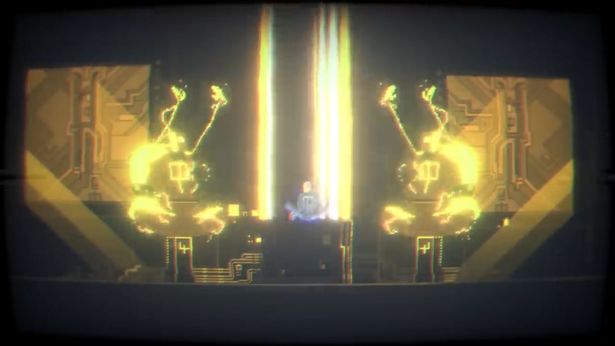 How much more yellow could this be? The answer is none. None more yellow. 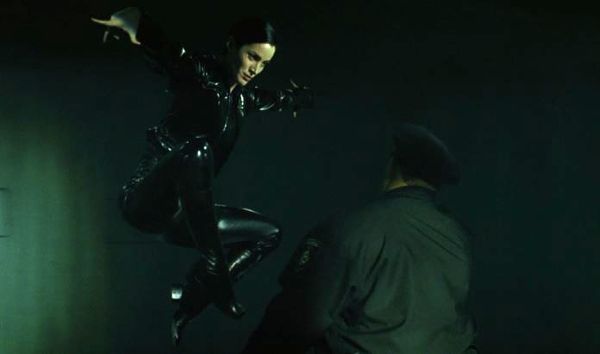 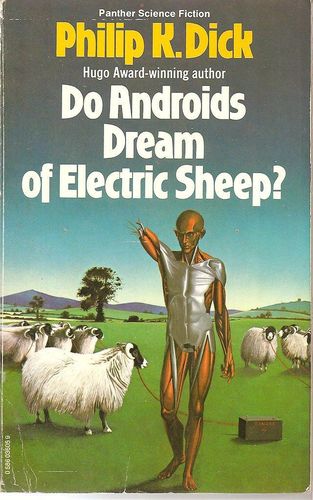 In that moment, I understood what they say about nostalgia: that no matter if you're thinking of something good or bad, it always leaves you a little emptier afterward.

And as Ive found myself delving deeper into the retro video game scene over the past few years, I cant help but agree with that sentiment. I dont like that I agree with it, but Ive always been one to call a spade a spade. Chasing your past, especially by re-acquiring rather expensive pieces of circuitry and plastic, is a fleeting thing, no doubt. But, luckily, there are experiences out there like the sublime Narita Boy that frame nostalgia in such a positive way that you cant help but feel good about it.

At least for a tad bit longer