I played the first two installments of Doom after school like an addict. So, when at last year's presentation of Doom Eternal I saw a lot of references and details right from the classic installments of this cycle, nostalgia hit me with double force! I was immediately sold on it. Colorful graphics, almost the same look of enemies and items found along the way, foreshadowed a pleasant throwback to the past in a modern, impressive environment. A short encounter with the playable version at Poznan Game Arena only confirmed that there is quite a lot to look forward to until March 2020, and besides a few novelties, I found another nod to the veterans of the series! 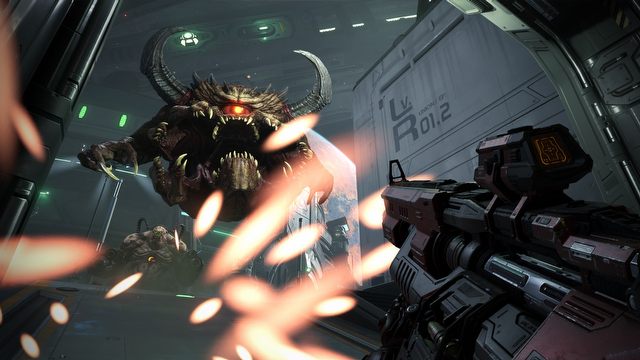 The demons look just like they used to  only better!

The playable demo begins with a tutorial on the new gameplay mechanics in Doom Eternal. Seemingly boring, it boils down to pressing buttons on command in some artificially created virtual reality, with familiar sounds playing in the background. Its Robert Prince's the Healer Stalks, a piece from the second level of Doom II: Hell on Earth, to be exact. The nostalgic easter egg ends along with the start of the game proper, when, after the scan of the scientist's card we've seen on a trailer, the slaughter of demons begins, with some juicy heavy metal playing in the background.

Unlike Hell on Earth from 1994, Doom Eternal is not just a set of additional levels and demons to complete the highly successful installment from 2016. The new game introduces a lot of fresh solutions, mainly in terms of character movement. The Doom Slayer can now climb walls, swing on bars or dash instantly in the chosen direction, thus prolonging a jump or making a quick dodge. There's a new toy, a grapple hook attached to a regular, double-barrel shotgun, which lets you quickly close in on an enemy. Battle arenas have become much more vertical, full of objects allowing you to move over opponents, and finding your way out of an area turns the game into a real FPP platformer...

...which I didn't really like  at least after going through those few stages. In my opinion, there are too many platformer elements. Some mechanics are not suitable for the heavy, armored Doom Slayer, and, above all, take too much time. Instead of just shooting and chopping the demons, we go looking for elements of the environment that we could hold onto. I also had the feeling that all of these novelties in the Slayer's movement are, paradoxically, a bit slower than the last installment of the series. I would choke the sprint key involuntarily, because it seemed to me the character isn't moving as fast as it should. Well  it will either be a major pitfall of the new Doom, or I will get used to the rhythm in the full version.

A slaughter for everyone

Using the new guns, on the other hand, probably won't require any getting used to, same as taking advantage of all the new ways of wreaking havoc. Everything just looks and works great, making it a lot of fun. In shooters, we usually have one or two favorite guns. In Doom Eternal, when cleaning the arena from opponents, you can easily use the entire arsenal! Different weapons have different effects on individual enemies, which can really give you an edge if used correctly.

When playing the demo, I was happy to see the character development options are now much more accessible, which is an important improvement from the previous installment. Here, everything just jumped into the right place right after it was collected. Maybe it was prepared for the needs of the demo, but I expect the same thing in the final version. 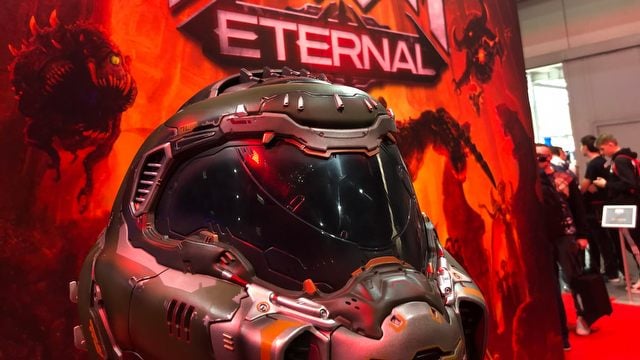 On PGA, you could feel like Doom Slayer for a moment.

With new toys and even more bizarre glory killing animation, Doom Slayer now seems like perhaps the most powerful character of all video games. Whether it's with a special blade on the shoulder, a flame thrower, or an iconic chainsaw, destroying demons is pure joy. And even though we do a lot of damage  sometimes cutting out whole pieces of body or shooting away the limbs  I did not feel the violence was excessive or off-putting. Maybe it's because we're just fighting demons and monsters, and maybe because the colorful graphics make it a bit cartoonish  but Doom Eternal in this regard actually seems more civil than Mortal Kombat or the Sniper Elite x-rays. It's a beautiful massacre for everyone meeting the age requirements.

The audio and graphics certainly reinforce the fun. Doom Eternal looks and sounds fantastic. The demo was pretty well prepared  we've visited both a space station with futuristic hallways, and the lobby of hell itself, built in Gothic style. The brownish sepia from Doom 2016 was superseded with much richer colors that are really easy on the eye. In turn, the zombie soldiers, Mancubus, Cacodemon and Pain Elementals look like the classic versions of the old models, so that instead of huge pixels, we see them in HD-quality (although today, perhaps 4K would be more suitable)  exactly as we imagined it when looking at the concept arts twenty years ago. 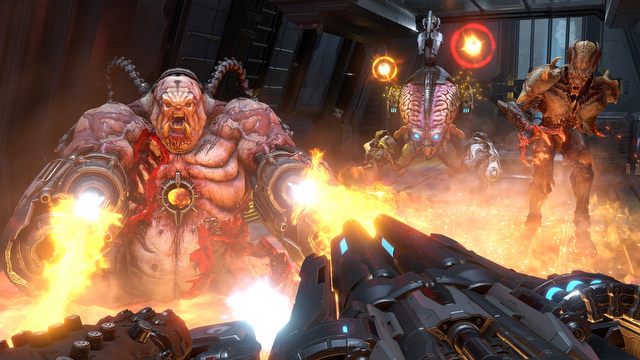 Everything is not perfect, but I really loved what I've seen.

Doom Eternal has a chance to be a perfect example of how to resurrect iconic brands from the 90s. How to create remakes that simultaneously preserve the atmosphere of the original, but at the same time keep it up-to-date and make it appeal to new generations. I do have some concerns about the mentioned platformer elements, but they may just turn out perfect in the full game  we shall see. In the meantime, we just have to be patient. The demo I tested often kicked me to desktop  that's a fact, but overall, I didn't notice any bugs, glitches or stuttering animation during the game.

And for Christmas, I'd like another nostalgia trip back to the 90s  having the demo available to download for all platforms, so that we can really test it before March 2020. A short hands-on during the Poznan Game Arena was not enough. And imagine a free Doom Eternal shareware demo episode, rather than another "open beta"  just like it used to be  this would be a real homage to the days of old! 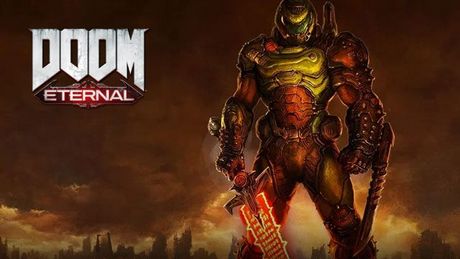