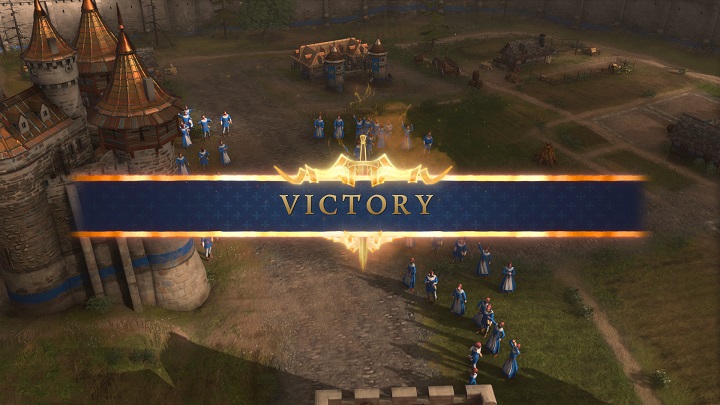 Victory! That's the cry let out by fans of the series who have been waiting for this return since 2005 (sic).

The Age of Empires series has been on the market ever since 1997 and never stopped to amaze with high quality instalments and, most importantly, brilliant gameplay. The rough history of Age of Empires IV, however, shows the fragility of iconic status and proves that you shouldn’t judge a book by its cover. After the initial announcement, fans of the series went crazy – their beloved series was being resurrected and that was all that mattered. However, when the first gameplay was revealed, many a bitter word rained down on the developers. Gamers accused them of sacrilege, turning their beloved series into a colorful mobile game, all in words as harsh as they typically get on the web. The developers filtered out the slurs and took the credible feedback to heart and the subsequent trailers saw a shift towards more classic aesthetics, but much of the community complained about the visuals anyway. So: what's the full version of the game like? Well, I can reassure you – Age of Empires IV looks great, and the developers hit the bull's eye with their choices.

As we've reviewed the pre-release review version of the game, so bear this in mind when you read about any bugs. Likely, these shall be eliminated in future updates. It's just something to remember. 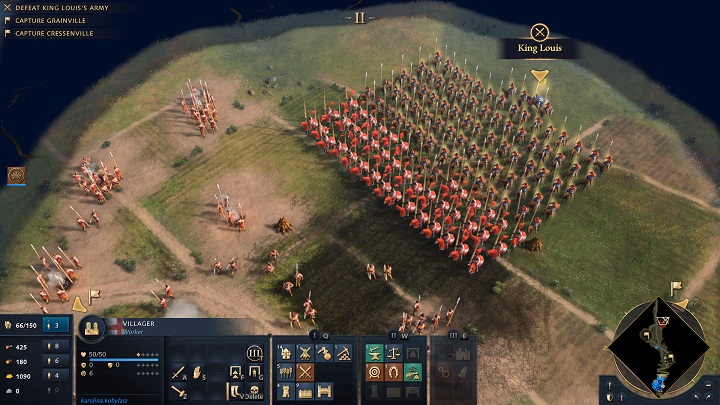 Such an army can only be defeated by the best strategist. Me.

Age of Empires IV pulls no punches when it comes to its four story campaigns. The game, developed by Relic Entertainment and World's Edge studios, allows us to play as the English, French, Mongols and Rus. Each faction has its strengths and weaknesses, but by far the most interesting to me was the first one, where I learned about the Normans and the origins of the war with their neighbors to the south. All the adventures are very interesting and are not only exciting, but also... educational.

All four adventures are based strictly on real historical events (unlike in Age of Empires III), which is evident at almost every turn. Each mission is preceded by extensive cut-scenes that introduce us to the atmosphere. A spectacular gimmick is featured in sections, in which we see real battlefields filmed by camera crews with animated soldiers imposed on them. This allows you to not only see the actual locations of history-defining battles, but also see their scale. You can even get the impression that it's some historical drama. I admit that the campaign from Age of Empires IV is quite outstanding compared to the campaigns from the previous installments of the series, which were all well-written stories. 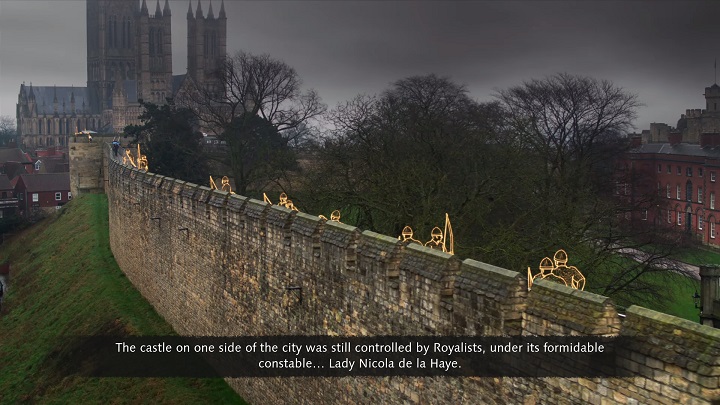 A common sight in Age of Empires IV.

The story missions also have a great advantage in that they're unique from the usual skirmishes. In some battles, we have limited units to choose from, cannot access a higher eras, or have very limited resources. Age of Empires IV, by the way, is clearly focused on faster gameplay, offering a fairly small amount of available resources (especially stone and gold). You'll simply run out of natural resources before you can farm the map to max out your base.

The return of the king 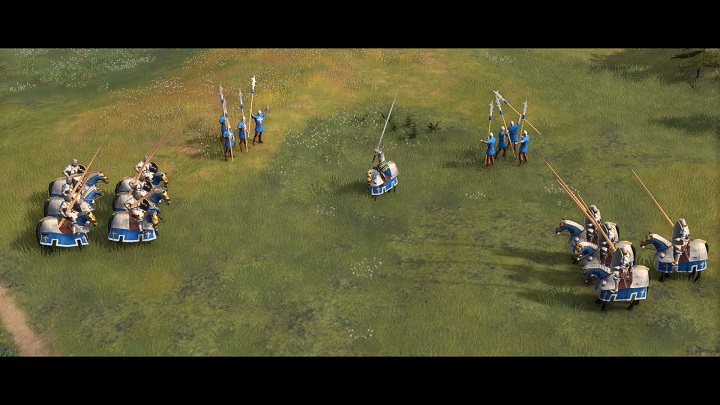 Brilliantly executed campaigns, however, can only get you so far without the basic mechanics really meeting the complex expectations of the fans. Fortunately, the developers have done an excellent job and elevated the classic gameplay to modern-day realities. The game combines the best elements of the first and second part, seasoned with some elements of part three. However, when it comes to AoE III, the elements that simplified the game, such as group training of troops or more accessible resource gathering, have been abandoned. In Age of Empires IV, you must train each soldier separately, and all the resources have to be delivered to the town center or dedicated buildings after extraction. This makes the gameplay a bit longer and a tad more difficult, but on the other hand, it increases immersion.

As concerns combat, it's likely the element that saw the least changes. It's still a simple system, where we send single units into battle. We can, of course, group them and divide them into smaller formations. The combat in general is a regular game of rock-paper-scissors, with different units being more effective or vulnerable against and to specific types of enemy units. Overall, this is a system that balances well between tactical options and a level of simplicity apt in this kind of game. 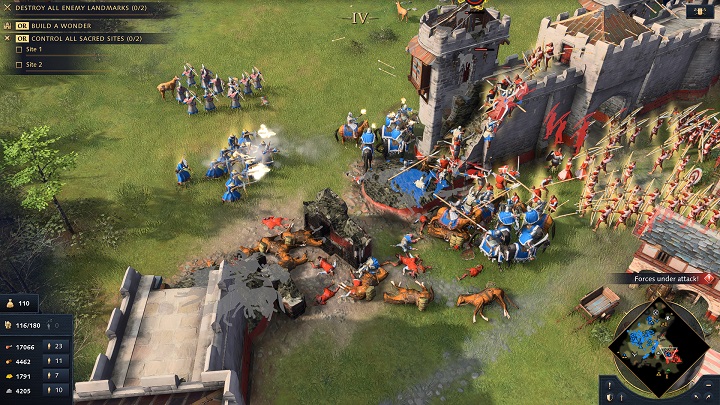 Even in the heat of battle, you can't forget about strategy.

When it comes to strategy, its capabilities here are rather straightforward, but also effective. Our soldiers can be positioned in several formations, each unit has some bonuses against a different type of enemy... It's generally your garden-variety RTS combat. Special skills are more interesting – they are accessible to special heroes or, sometimes, specific units. Some of them came in extremely handy for me, such as the ability that increased the attack power for a few seconds. It works on a similar principle to superpowers in RTS games like Lord of the Rings: Battle for Middle-earth. I also watched – with considerable surprise – as my archers set up a sort of chevaux de frise, effectively neutralizing the threat of a hostile cavalry raid. There are more such details, and I certainly haven't discovered them all yet.

What I'm not a fan of is the upgrade system, which is very poorly designed. The upgrades icons are all quite small, set against a background with a solid color, making it hard to intuitively find the right upgrades for the first few hours. In this case, I liked the interface from Age of Empires III much better, where the quality of the upgrade was determined by a certain color – bronze, silver, and gold. Over time, I've gotten used to the new system, but I'd like to hold on to the ability to customize it to my own preferences – muscle memory is hard to overcome.

Not everything is perfect 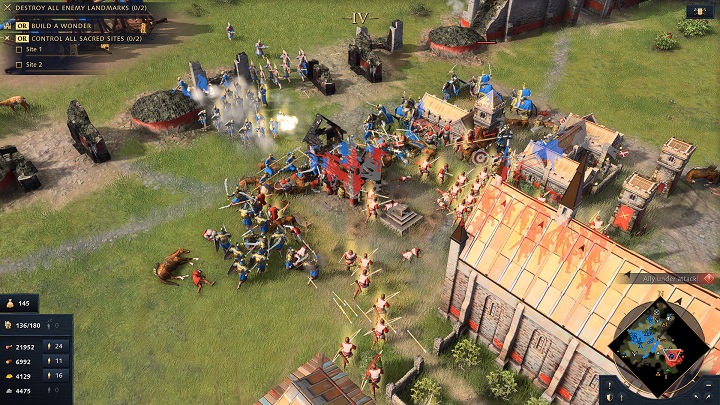 The visuals are okay, but I guess I was expecting more.

However, while praising Age of Empires IV, I have to point out a few flaws in the game, which do not interfere too much with the gameplay, but you will certainly notice them nevertheless. The most obvious downside are the visuals. Don't get me wrong – Age of Empires IV looks nice, but it just doesn't feel all that modern. The resolution of most textures, the details on units and buildings, and the environments all look average. If Age of Empires IV was a remake of part two, I could understand harking back to the spirit of the original, but here, the potential was bogged down by too great an attachment to the past, I think. On the other hand, this means that Age of Empires IV will run even on very old hardware, and owners of older rigs are also invited to the party. At the same time, the loading times aren't astonishing. I specifically ran tests that showed 20 seconds to load a level on the super-fast NVMe SSD, and a little below 3 minutes (sic) on the HDD.

The limit of 200 units that you're allowed to create on any map is also a relic of the past that I'd like to see gone. In the days of single and dual-core processors, this may have made a difference in terms of performance, but battles in the new installment could be a bit more epic with 300 or 400 soldiers on each side.

I also encountered bugs in a few places, which were probably there because I played the pre-release version. I was probably most amused by horses running on the walls, and dismayed by the enemies who moved sideways, like crabs.

The waiting paid off 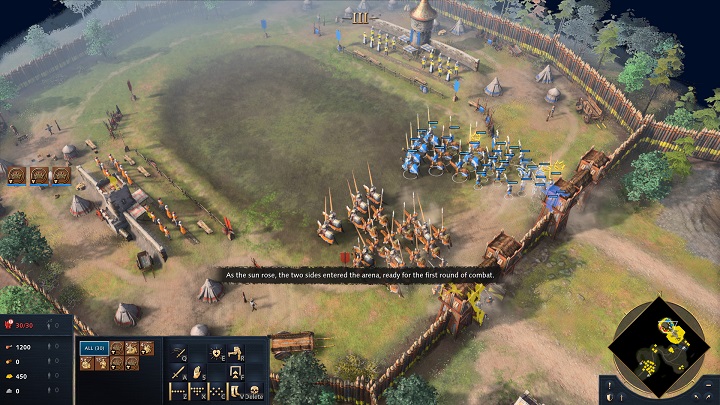 My expectations for Age of Empires IV were huge – after all, you don't always wait over 15 years for a game. I must admit that the first trailers scared me a little, because the visuals actually did resemble a mobile game. Fortunately, the first contact with the latest part of the beloved series dispelled all doubts – Age of Empires IV is a very good game that I can recommend to anyone, not only veterans. The production is distinguished by a high, but satisfying level of difficulty – each victory tasted deliciously, because you had to earn it beforehand. But don't let that deter you if you're new to the series – the game is very accessible and delivers extensive tutorials.

Almost every element of the new Age of Empires made me remember how much fun RTS games used to be back in the day. I've played the remastered trilogy in recent years, but Relic's fresh approach has kept me up several nights trying to win potentially impossible battles against three enemies at once. And it's probably that enjoyment and the ability to lose myself in my favorite game that matters most to me.

I'm curious if the sales will be good enough for Microsoft to decide to give the series a new life. In a possible Age of Empires V, the developers could break from the classic style more and incorporate their own vision of what Age of Empires should look like in this day and age. But for now, it's a song of a very distant future. In the near future, I'm going to soak up some more multiplayer skirmishes, which should come to life with the game's release.

The phrase "Age of Empires" lights the nostalgia candle for me. I vividly remember all the campaign from my favorite part three, and the hundreds of hours spent in skirmishes – both solo and multiplayer. As soon as I heard about Age of Empires IV, I knew that no other release this year would be so exciting for me.

According to our users, Age of Empires IV for PC was a disappointment - the expectations before the release were higher than the current average user score.