Valhalla wouldn't be such a great game if not for numerous, significant changes in gameplay. I'll start with the character development system, which has been completely revamped. Character levels haven't disappeared, but they have been quite cleverly camouflaged. Buying skills on a very extensive tree, we constantly increase the power index, which grants access to more difficult lands. Crucially, I never felt the need to grind experience in the game to be able to cope with the challenges. Valhalla is very flexible in this matter, and it's not like we have to spend a few hours grinding just to reach the level required for further sections of the game. Even if we are a few points short, we will be able to cope without any problems, and the gap will be bridged with just a few tasks. 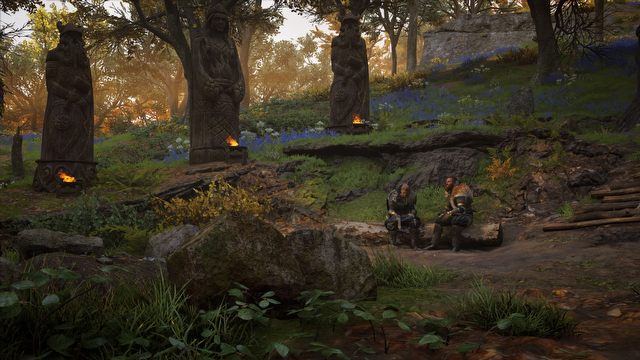 Charming chitchat in the environment of the gods.

The game actually lets us complete even the missions marked by the sinister red skull, but only if we exclusively use the hidden blade. The iconic weapon ignores all level caps, and lets you kill virtually all enemies with a single thrust (apart from the traveling Ancients), even those 70 levels above you. I tried doing this myself towards the end of the game, in Winchester, and I admit I was quite astounded – if you only keep your cool and stay undetected, you'll be able to empty even the biggest garrison. Traditional weapons will be completely useless in this case, though.

I also like the skill tree, which at first glance resembles the one from Path of Exile. There's complete freedom here and no penalties; you can switch skills up at any time. It is worth to look at this screen every now and then, because the direction you take at the beginning might not be the optimal one twenty hours into the game, and the potential of your character might be much bigger. In short, playing with the skills was never a waste of time, and always paid off, despite requiring quite a lot of browsing.

What can I loot? 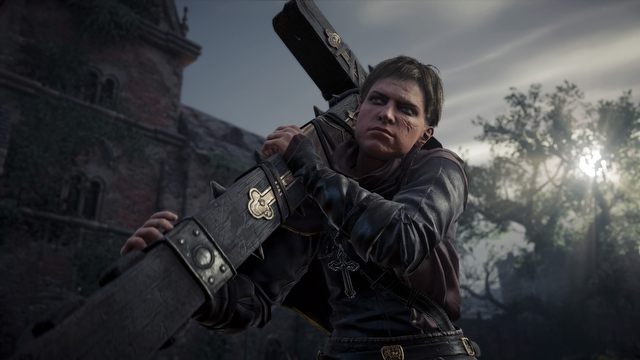 Carry your cross with pride.

Huge changes were also done to loot, and this will be the most divisive aspects for fans of broadly understood action RPGs. If we compare Valhalla to Odyssey, then we come to the surprising conclusion that this game simply does not have gear. Obtaining any new weapon or piece of armor is quite an event, and obtaining one that matches our set is veritable miracle. Enemies don't drop anything interesting. We get an item or two a few times as rewards in main quests, but other than that, we have find and open the special golden chests, containing only items. What's equally surprising, the items practically do not differ in basic attributes, only the bonuses they provide for wearing a full set. 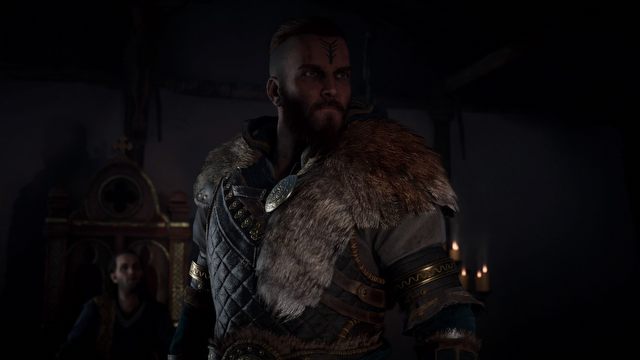 Siegfried, one of the most important characters in the game.

This means a few things. First, for most of the game you will run in the same costume that can occasionally be upgraded to the next level. Secondly, get ready for tedious scavenger hunts – if you want to complete a full set of items, you pretty much can't ignore any of the chests. Thirdly, none of these items can be sold, so you'll save a lot of time. And finally, though it sounds trivial, you just have to learn to like what you have, because you will not get anything better, unless…

That's right... unless you decide to trade with Reda, who always has some legendary loot in stock. The problem is that the only currency he accepts is opals, and these stones aren't as abundant as iron ore. They either have to be found, or obtained by completing daily challenges. The alternative is still built-in game store, i.e. the most dishonorable solution true players could use. The store already has a tempting range of weapons and armors, and I doubt they'll be obtainable in any other way than for real money. I can't tell you how expensive Ubisoft's virtual currency, the Helix creds, is, as they're not sold yet, but I assume these won't come in cheap. Another thing is that these are, in fact, cosmetic items, because as I wrote earlier – weapons and armor differ primarily in appearance and special bonuses. The items bought for real money won't suddenly make your character a demigod. That's not gonna happen.

According to our users, Assassin's Creed: Valhalla for PS4 was a disappointment - the expectations before the release were higher than the current average user score.