The end of the world never seems to ever truly be the end. Whether it’s nuclear fire reducing our world to a smoking ash heap or the undead rising from their graves to topple civilization, humanity just seems to bounce back. Well, in games, books, and movies at least.

Until we actually end as a species (my money is on an asteroid) we’ll continue imagining the apocalypse and how we just might survive it. Endzone: A World Apart, is such an exercise and one more open-ended than, say, Fallout Shelter.

Now before we really dig in there’s one thing we should get straight: this game has nothing to do with football. The Endzone is where humanity took refuge from the world-ending calamity, not where you’ll spike touchdowns.

Things are pretty light narratively in Endzone. Besides a contextual cutscene at the beginning there’s nothing so formal as a story. This works though because Endzone is all about telling your own story in the post-apocalypse.

Rather than have you build up your base, resources, and units just to unlock the next story beat you’re almost entirely left up to your own devices. There’s a lengthy tutorial that clocks in at just about four hours to complete but after that you’ll have a solid enough grasp on the mechanics to seek out your own destiny in the wasteland. 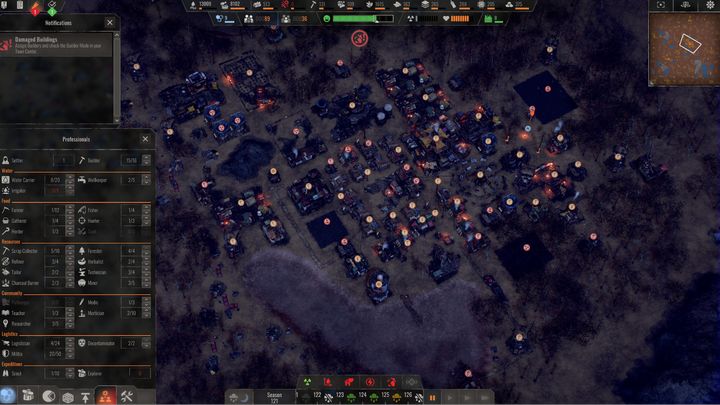 Endzone is more akin to SimCity or City Skylines in that you’ll build and grow your survivor settlement into a thriving civilization built on the ruins of the old one. Where Endzone departs from other city builders is in its post-apocalyptic modifiers. You’ll contend with radiation, dust storms, raiders, and droughts as you try to keep your nascent civilization alive.

There are some neat mechanics woven into Endzone’s city management systems like heatmaps that will give you vital information about your surroundings. You can see where the ground’s contaminated with radiation, or where the soil is better for crops, and even check the condition of your settlement’s buildings.

You can control the flow of time to speed along projects and buildings or have things play out at regular speed so you can plan and manage resources and long-term strategy. This was my first foray into city builders and I have to praise the team at Gently Mad studios for making it as painless a process as possible.

Though four hours is easily the longest tutorial I’ve ever been through, the devs have done an impeccable job at bringing someone who knows literally nothing about city building or management up to speed and into a competent administrator. There’s a handy checklist system that tells you what you should be doing and links you to related structures or tasks you need to complete in order to advance. 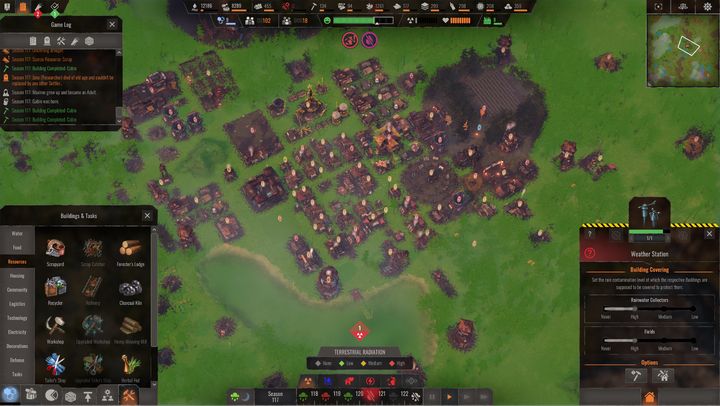 Green in this case means good.

Starting out small you’ll assign your settlers jobs and rather than command them as individual units you have a pool of manpower to draw from. You’ll need to grow the population in order to have more workers to assign to more advanced tasks like tailoring, research, or defense.

Once your basic facilities are set up to get you the food and water you’ll need to keep people alive, you can eye more advanced facilities like a scrapyard or forester’s lodge. You can assign a work area with facilities like these and your workers will do the rest. Want to clear some trees to expand your town? Just tell the foresters where to start chopping. 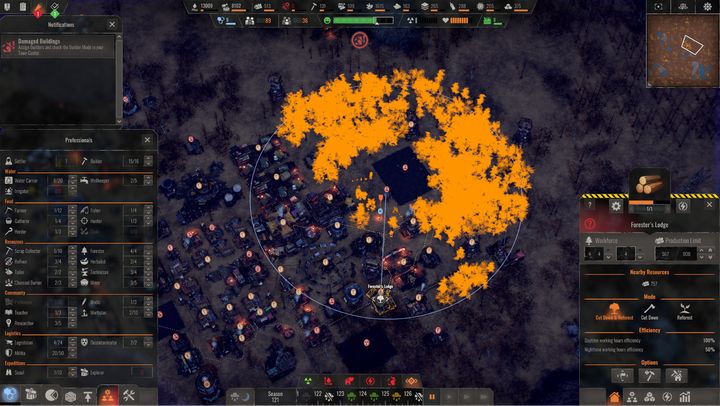 Chopping down the forest to make way for a new mall.

You’ll not just have to keep your settlers alive but keep them healthy and upbeat. The end of the world can be kind of depressing afterall. Make sure your settlers aren’t being bathed in radiation, or consuming it through contaminated food and water, and they’ll be singing your praises.

Another neat feature is planning out where your settlers live. Putting homes next to noisy facilities will drop morale. You also have to build to keep pace with your population to prevent homelessness. Imagine surviving a nuclear apocalypse and being homeless on top of it. Worst. Luck. Ever.

To aid in your fight for survival you can scavenge old buildings for supplies left over from the old world. You’ll need to assign scouts and explorers to go on expeditions and scout out the very sizable world map. No need to worry about radioactive mutant bears or couch-sized cockroaches; I didn’t run into any hazards while sending out my survivors to explore.

That doesn’t mean the only thing to contend with is the elements. Bands of raiders will crop up and you’ll need to muster a militia, build defenses, and provide weapons to your people. Protecting your borders means keeping settlers alive, buildings intact, and supply stockpiles out of the raiders thieving hands. 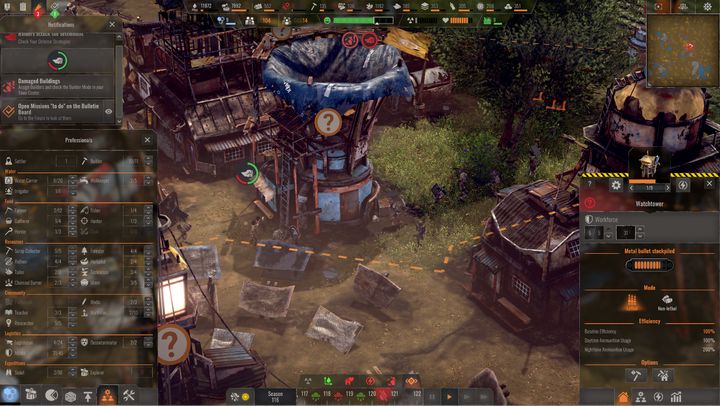 The raider have come to town.

That’s more or less the gist of Endzone. You can play out a number of scenarios with specific modifiers like intense heat or a lack of food to put your survival skills to the test, but the real meat of the game is building and crafting your civilization till it spreads across the entire map.

It’s neat to zoom in all the different buildings or turn up the speed of time and watch rain fall over your crops and trees sway in the breeze. The devs have gone the extra mile with ltte touches like these and it shows. While not a graphical tour de force there’s more to interact with here that elevates the game from just being a nuclear apocalypse screensaver.

The only criticism I’d offer is sometimes it can be hard to figure out what to do. It’s not clear until you reference the survival guide what some of the answers to your burning questions are. Like, how do I stop my crops from being contaminated, or how do I repair buildings? These are in the survival guide but you’ll have to go digging for the answers. Luckily they’re easy to find.

It’s worth mentioning that the game has a great soundtrack. It made it much easier to chill out in the game and absorb the world and its mechanics. For a first time city builder I actually had a lot of fun despite the learning curve. I can see myself revisiting the game and building a city shaped like a pumpkin just for kicks.

For first-timers and veterans alike there’s plenty to enjoy in Endzone. Even if you’re just a tiny bit curious about city building sims there’s enough post apocalyptia vibes to draw in most gamers. There are no noticeable rough edges and everything feels tightly produced. Sound design, user experience, and gameplay all just flow and make for an enjoyable, if a bit laidback, experience.

I’d like to dedicate this review to my settler Martin, who randomly died of old age in the cabbage field and no one came to clear away his body. RIP, Martin. 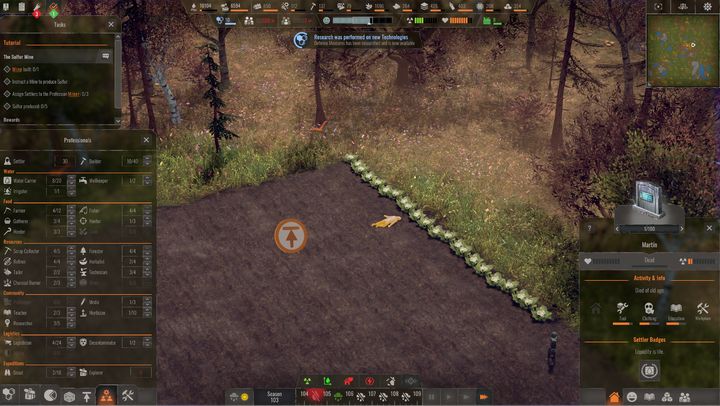 According to our users, Endzone: A World Apart for PC was a disappointment - the expectations before the release were higher than the current average user score.