The chiseled chin of Bruce Campbell is known all over the world as audiences have watched him slay deadites and demons as Ash Williams from the ‘80s to present day. A very successful and enjoyable revival of the series even lasted three seasons on TV. There’s just something about the combo of a chainsaw arm and a boomstick that make for a great initiation into cult horror and B-movie culture.

The movies are great, the show is great, but we never did quite get a great video game adaptation. Evil Dead: Hail to the King played like a mediocre Resident Evil clone, Evil Dead: a Fistfull of Boomstick managed a bit better as a run and gun 3rd person game, and Evil Dead: Regeneration rounded things out as the best of the bunch serving a straight up action adventure game. 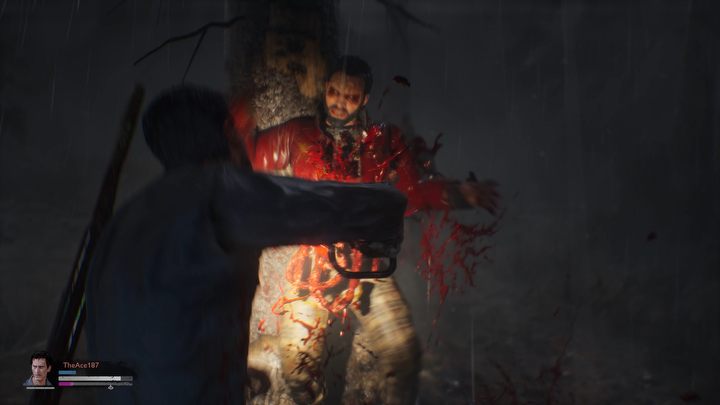 Evil Dead: The Game takes pages from Left 4 Dead and Friday the 13th combining them into an asymmetrical multiplayer PvP. If you’re hoping for cutscenes, a story, or Campbell’s melodious voice reading dialogue I’m sorry to say this is not the game you’re looking for. There are some “missions” which have you complete a set of objectives solo but these, like other areas of the experience, cut corners in the story department leaving just the deadite slaying action.

And it’s a good thing that’s pretty fun. There are a number of different characters from the films (some of whom you’ll be forgiven for not remembering since their job was just to be killed off) and you’ll grind out skill trees for each of them as you can’t select one if it’s already taken by another player.

I grinded out Ash from Army of Darkness (there are several different versions of Ash that span across the game’s class system) only to find out I’d have to jump into the shoes of a new survivor with no upgrades. This seemed strange since the developers had to make peace with having teams potentially made up of four Ash’s (Ashes?), why not let them all choose the same one if they want? 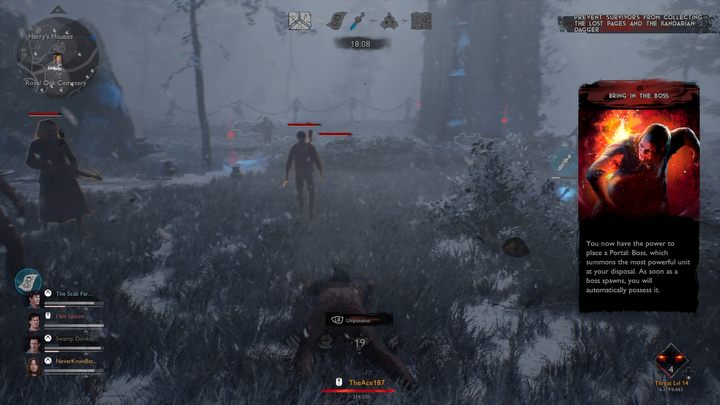 It would be a small gripe if it didn’t take so long to grind up your skill tree and playing at level 1 without any upgrades frankly sucks, especially if you’re up against a fully leveled up demon. But if grinding games are your thing then you’ll have plenty of fun with Evil Dead.

To dispatch the armies of darkness back to hell you’ll use all manner of blunts and blades and the occasional chainsaw. Boomsticks, handguns, and rifles too will also help you spread lead poisoning among the undead. Ammo can occasionally be scarce but melee weapons are unbreakable and come with some very satisfying finishing move animations. All weapons also scale up from basic to legendary so keep an eye out for any golden weapons to bring to the fight.

I’d like to draw here a comparison to another licensed game based on a beloved franchise, Aliens: Fireteam. The two are very similar in that the main focus is grinding, you replay the same maps over and over, and the devs plaster over a lack of story content with highly polished visuals. And both, in their own way, suffer for this because like the world of Alien, Evil Dead is full of potential for stories. Which makes it a shame they didn’t even attempt to build on the mythos; they just put together an Evil Dead-themed hack n’ slash and called it a day. 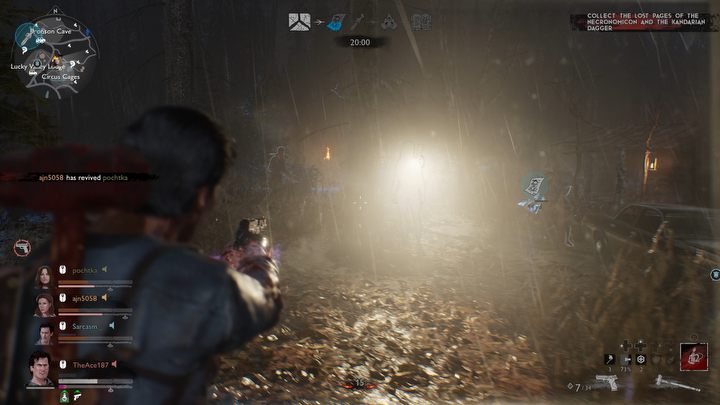 It also feels like they had Campbell only for an afternoon of recording. The wisecracking Ash is far more talkative in his other games, games that understood what the audience wanted: lots and lots of Ash. Evil Dead: The Game recycles a ton of one-liners. After two or three matches you’ll likely have heard all Ash has to offer.

This is good but it could have been great. Fans who wanted more story and more Ash Williams will be disappointed. Though the PvP can be engaging at times there’s a few broken elements to the gameplay that need fixing so players and demons go head to head on an even battlefield. The rest is your standard loot, fight, complete objectives multiplayer game. In its current state I was left wanting more: more story, more gameplay scenarios, and way more Bruce Campbell.

We also don’t get enough game for $40, in my humble opinion. You see, there’s just one mode, survivors vs a player controlled demon, and only a single map. They pull a few tricks to make it look fresh on the eyes like adding weather effects or changing the time of day, but so far there’s just one map and you’ll get used to it fairly quickly. Given how there are portals to other times and dimensions in the Evil Dead universe it’s a shame we don’t get to see the ancient past or distant future. Both would have been perfect here for the sake of variety.

It’s worth saying how pretty it all is. The haunted Michigan forest of the films is beautifully rendered and littered with movie references. The Knowby cabin is of course there (complete with demon-filled fruit cellar) and the entire zone is a thoughtful expansion of the area we didn’t see in the original films. You’ll raid houses, cabins, and caves for supplies as you race around to complete objectives. 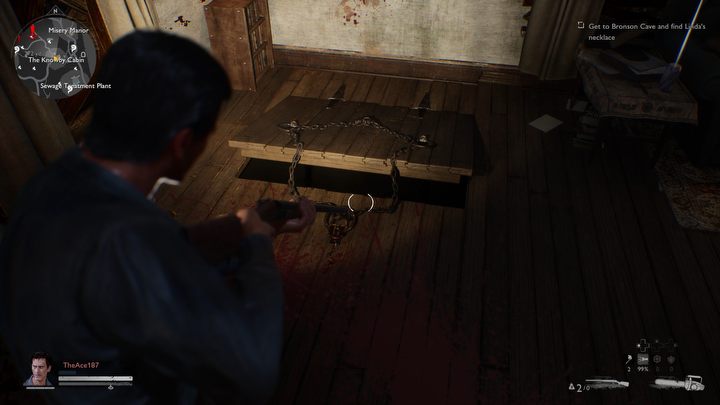 You’ll need three pages of the necronomicon and the Kandarian dagger which will summon the Dark Ones. Defeat them and the demon loses. It’s a fairly straightforward loop but there are more than a few wrinkles that can make it a less than engaging experience. Compared to Friday the 13th, which is basically just hide and seek, Evil Dead has things baked in that just don’t quite gel.

For starters if your team isn’t communicating it’s way less fun. This is true for all multiplayer games but especially if you’re new to an experience and want to learn what to do. It’s also just more engaging and the matches I played where everyone is dead silent were by far the least engaging. I know the developers can’t make people talk but they could have made it tougher for players to split up.

You can also use cars to get around the fairly large map but these can quickly devolve into total frustration. The driving feels finicky at best and going off-road is not advisable. More than once I tried to take what I thought was a shortcut and ended up flipping my ride.

Being left on your own by an unresponsive team just leaves you trekking around trying to figure out what to do next. Not a great plan. Especially when waves of enemies spawn at climax moments and you wind up nowhere near the action. More than a few times I rolled up to the fight to see the rest of my team taking dirt naps. Not very groovy. 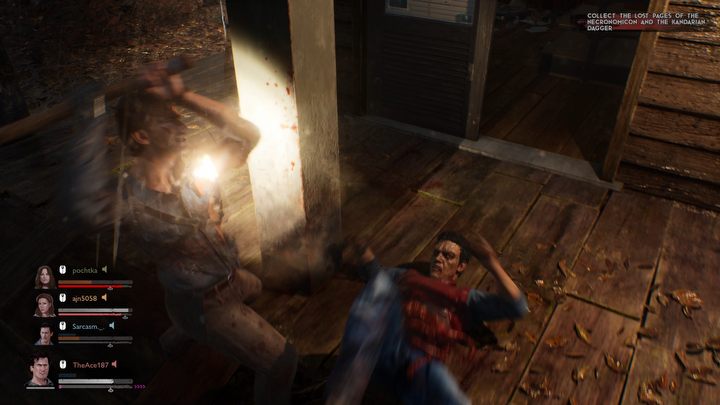 The fear mechanic is supposed to keep your team together but this doesn’t quite work the way the developers planned it. You see, on the other side of the fight, is the player controlled demon. They can only focus on one survivor at a time if a group isn’t sticking together, which makes splitting up actually a big advantage for the survivors. The way fear is supposed to work is that when you’re alone your fear rises higher, making you vulnerable to possession. But what good is possessing a lone survivor when none of his friends are around? There’s no one to attack.

A game like Left 4 Dead made going solo a death sentence. Not so in Evil Dead. When playing as the demon this can get kind of frustrating as going and picking on a single person isn’t usually to your benefit. You fly around the map in the iconic first person demon-cam from the movies but you need to collect infernal energy in order to do anything. Spawning enemies for a single person or laying traps may take a bit of a toll on a lone survivor but rarely made the difference in the handful of matches I played. 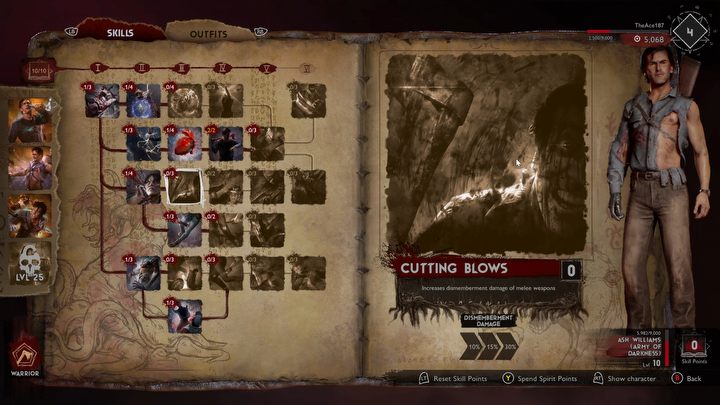 If anything it gave survivors the edge as I wasn’t able to rank up fast enough as the demon (you level up with every attack) to be a real threat. If the survivors split up into teams of two they still have a massive advantage as you, as the demon, can then only focus on a single group and there goes 50% of the XP you could be earning by attacking a group of four.

The fact that this didn’t come up in testing is a little worrying but hopefully they recognize the flaw and patch the game. Survivors should be sticking together at all times, otherwise they’ve got the upperhand in nearly every match.

Fans of the Evil Dead franchise will likely come to the same conclusion I did: this is good but it could have been great. Fans who wanted more story and more Ash Williams will be disappointed. Though the PvP can be engaging at times there’s a few broken elements to the gameplay that need fixing so players and demons go head to head on an even battlefield. The rest is your standard loot, fight, complete objectives multiplayer game.

With some more work this could be a decent bit of horror action co-op to come back to, the bones of the game are certainly solid enough, but in its current state I was left wanting more: more story, more gameplay scenarios, and way more Bruce Campbell.