Endwalker, as the name itself suggests, is a continuation and an ending to the story starting in A Realm Reborn through 3 expansions (Heavensward, Stormblood and Shadowbringers), which closes the arc of the saga of Scions of the Seventh Dawn and the war between Zordiark and Hydaelyn. Let me tell you, this is the best Final Fantasy story ever told. I won’t get into spoiler territory, because it would be a crime to rob you of the pleasure of experiencing it firsthand.

Update after the first patch and final score

We’re ready to sum up. As I wrote few weeks ago, FFXIV Online is the best MMORPG on the market and I strongly recommend everyone to try this title out, when it will be available again. It takes its time at first, but they payout is very much worth it.

Let’s start by saying that it’s incredible how the story in the game can be so grandiose, world-changing, and intimate at the same time. How the developers explore such seemingly basic ideas as hope, friendship or loss, and make them the main motifs of the game. On the other hand, they tackle such big questions as “What’s the meaning of life?” – and come up on top. Perhaps it’s the nature of Japanese games because I felt similar tones playing Nier: Automata. It’s not quite the same, but the similarities are apparent. It seems that the collaboration of Yoshi-P (Naoki Yoshida – game director of FFXIV) and Yoko Taro (the man behind Nier franchise) was way deeper than the Nier-themed raid at the end of Shadowbringers. 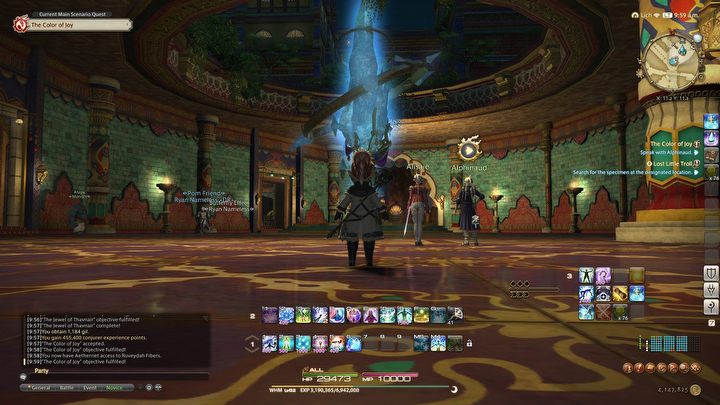 Does Endwalker outclass Shadowbringers in terms of the story? It’s a very subjective matter, and so there’s no clear-cut answer. When it comes to the narration and the gargantuan undertaking which is simply wrapping up the years-long story and saying goodbye to the beloved characters, it definitely is something to behold. But when it comes measuring emotional impact, then Shadowbringers was definitely better at making you weep. Endwalker is more philosophical, seeking answers to the fundamental questions.

Endwalker brings two new jobs into the rooster – Reaper and Sage; melee DPS and healer, respectively. They both start at level 70, so players must catch up to get into the most recent content if they’re blow that. Overall, level cap is raised to 90.

Additionally, we get to explore six big, new areas, and two big hub cities. As usual, those areas are beautiful and masterfully designed. The only strange thing for me was the color palette of deserts of Thavnair – purple & violet stones create a dissonance with the rest of the environment. But perhaps that was the intention? 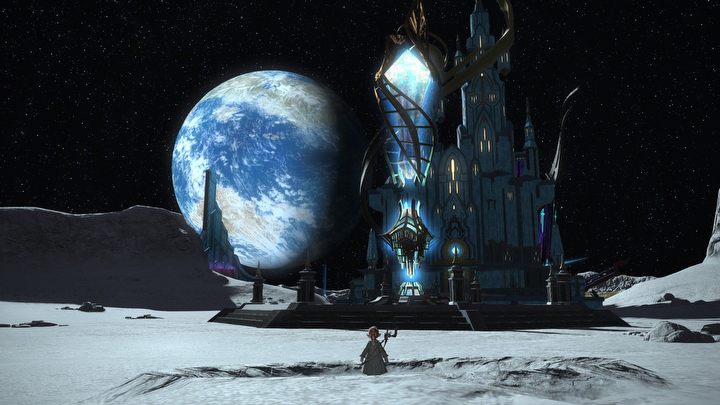 As always, the release of an expansion is just the beginning of its life cycle. We got some of the features already (playable male Viera, extreme trials), but there’s a lot still to be released – new play mode called Island Sanctuary, playable female Hrothgar, and high-end raids.

The new expansion also means new narrational mechanics, which in Endwalker mean tailing/shadowing events and improved escort segments. Those are fine on their own terms, but they’re grossly overused during our adventures through Eorzea. It’s one of the minor issues I have with this game, which just shows how good the overall product is.

Final Fantasy XIV always was defined by music, and Endwalker is no exception. Masayoshi Soken, the lead composer and sound director, has created his opus magnum. All the songs and tracks beautifully complement the events and landscapes we witness.

The main theme of Endwalker is a tribute to all previous releases – we can hear motifs from all expansions, but tuned to be even more epic and nostalgic for the players that went through all these adventures for years. 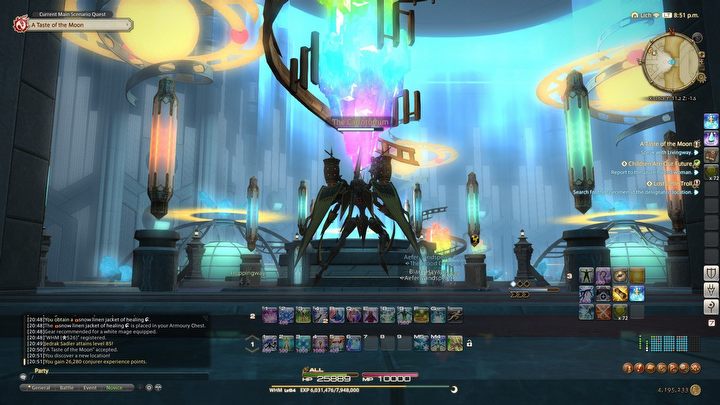 A major piece of content in the most recent patch is called Pandamonium: Asphodelos, and that is the first (except Extreme trials from the Main Story Quest) wing of the end-game, 8-man raid. As always, even on the easiest difficulty, those encounters are demanding and can take a few tries before all players get their bearings of combat. Still, these are very satisfying experiences.

What else to do having finished the Main Story Quest?

The emphasis of endgame activities in Final Fantasy XIV Online is a bit different than in other MMOs. Of course, there is increasingly more PvE challenges, but there’s so much other stuff to do:

As I stated at the beginning, I think that FFXIV is currently the best MMORPG available. The main reason is because it’s RPG first, MMO second. The story isn’t just an afterthought, but an integral part of the experience, and everything else revolves around the tale of the Warrior of Light. It’s logical, well-planned, and presented with great, voiced (or not) cut-scenes. NPCs aren’t neglected, and they unexpectedly return in key moments, even the minor ones. The plot hooks are taken advantage of, not discarded. It’s a first-grade narrative RPG.

With Trust system, you don’t even have to party with other people – NPCs are competent enough to go through Shadowbringers and Endwalker playing solo only, forgetting about the MMO part altogether. 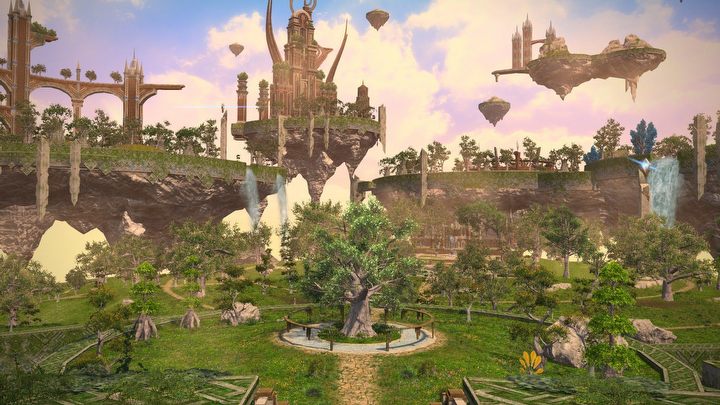 Furthermore, the game respects player’s time, and the grind, which is widespread in other MMOs, isn’t mandatory in FFXIV. Of course, players can spend hundreds of hours in the game, but they will do that to achieve goals that they set for themselves, not because developers have KPIs to meet, and so they time-gate every piece of content (looking at you, WoW).

FFXIV is currently the best MMORPG available. The main reason is because it’s RPG first, MMO second. The story isn’t just an afterthought, but an integral part of the experience, and everything else revolves around the tale of the Warrior of Light. It’s logical, well-planned, and presented with great, voiced (or not) cut-scenes.

Maybe even more controversial statement is that I regard FFXIV to be the best installment of Final Fantasy when it comes to story.

I think the reason for that is quite simple – with now 5 releases (ARR+4 expansions), the story can be told for much longer time, with more exposure to details and lore. Sometimes it can drag on and slow down too much, but the payout is very much worth it. At the end of Endwalker, I was sad that it was over, but happy that I have experienced it. It’s one of those titles that I wish I could forget, just to play it again for the first time. 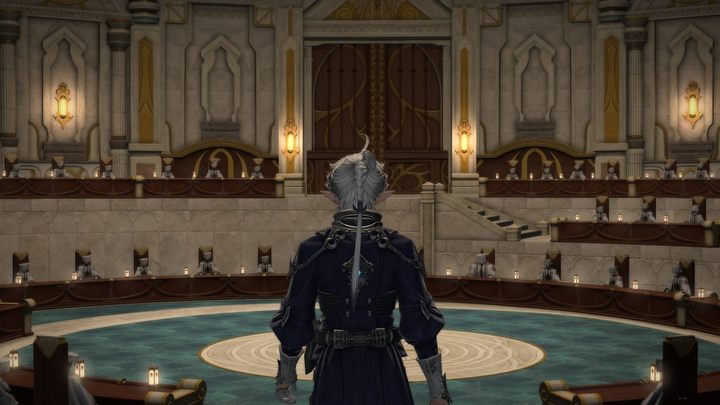 A lot has been said in terms of comparison of FFXIV and World of Warcraft, and Endwalker will only widen the gap between the two fierce rivals. In my view, WoW is increasingly lagging behind, with poor writing, troubled development, and the internal turmoil in Blizzard-Activision. On the other side, we have Square Enix, who seem to be soaring, with only the sky imposing some sort of a limit. There’s that, but then there’s server capacity: since launch, players must wait hours to log in. This is the biggest obstacle for new players that would like to try out the masterpiece that Final Fantasy is, even in the free trial.

To sum it up, I wholeheartedly recommend giving Final Fantasy XIV a try – it’s a unique experience, for fans of MMOs and RPGs alike, if you’re not frowning at jRPGs, which I know are not something for everyone. Even if you’re not a fan – I’d recommend giving it a shot, simply because it’s an excellent video game.

According to our users, Final Fantasy XIV: Endwalker for PC was a disappointment - the expectations before the release were higher than the current average user score.