I killed 75,000 enemies, I've traveled across Hyrule, met old friends, fried bacon and eggs, seen the world before Calamity Ganon arrived, and watched tons of cutscenes. In Hyrule Warriors there's plenty to do – this epic action game is dripping with content. Don't let this introduction deceive you, however: although the creators have taken what they could Breath of the Wild (and a little more than that), this game, in essence, is just a brainless brawler, in which you kill bokoblins and other monstrosities for hours on end. 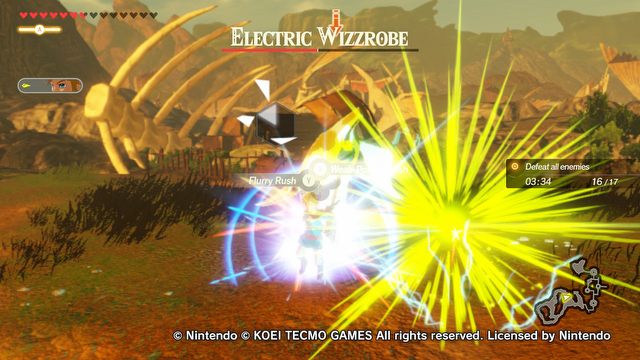 A certain monotony of can be a problem. I'm thus glad that Nintendo delivered this game early enough that I didn't have to rush to finish it. Hyrule Warrios is perfect for short sessions – and if I had to meet a deadline, it would probably have tired me out faster. And that's generally the approach I recommend for Age of Calamity. This is an excellent game to fill up random patches of free time.

HOW ZELDA IS IT?

Hyrule Warriors: Age of Calamityshares many features with Legend of Zelda: Breath of the Wild – the graphics, characters, and enemies; the universe, history, and weapons. Even cooking or animations of digging out a crate. However, I maintain my opinion from the preview – it's not Breath of the Wild 2. This is, first and foremost, a musou game – a glorious slasher with small arenas, no a sandbox.

You will feel like John Rambo or a similar lord of destruction in Huryle Warrios . And it's not a hyperbole – a regular fight will take you anything from a few, to 30 minutes, and you'll end up killing literally hundreds of enemies. In the ultimate battle, when we assume control over the divine beast, we'll kill... 30 thousand enemies. In a matter of minutes. 30,000. Armies of enemies, whether consisting of hordes of skeletons, bokoblins or lizalfos, are veritable cannon fodder, and we break through the troops like through butter. And this sheer, hypnotic feeling of power makes Huryle Warrios an insanely enjoyable game.

More powerful enemies (moblins, lynels, etc.), who are targets in a given mission or just obstacles along the way to the goal, require more focus – but we still easily send them to Zelda's hell. They are not particularly challenging, unless, of course, you attempt challenges designed for a higher level than your character's currently at, but it's the number of enemies that's key. Even the bosses shouldn't cause you problems, as long as you systematically develop your characters. The power of our heroes is indeed great. 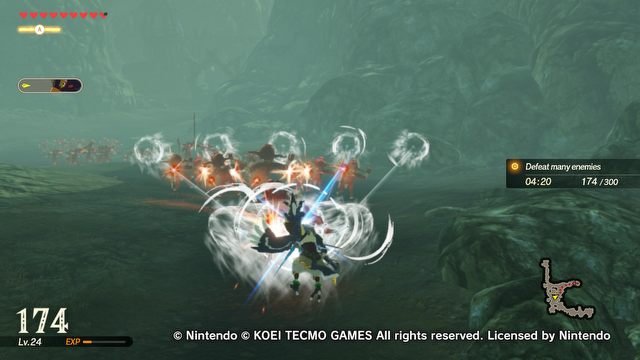 But the main thing is that the key mechanics of the game work just great. During the dozens of hours in Hyrule Warriors, I never got tired of decimating legions of enemies with insanely spectacular finishers. The fight, originating in a straight line from the Dynasty Warriors series, just gives a lot of fun – it's brainless fun, but in a positive sense. The only important thing is not to play too much of it, since it can indeed become tedious.

But killing enemies, which is the cornerstone of Hyrule Warrrios, is not all there is. After completing each mission, we return to the big world map (yes, you know it from Breath of the Wild), where we can develop our characters, learn new recipes, or visit merchants. An important part of preparation for missions is using the simple crafting system – in battles, we acquire raw materials, which can be used for cooking.

I knew more or less what to expect prior to actually playing Hyrule Warriors. This isn't the first Dynasty Warriors I've played – and in fact, I noticed few surprises. One of these turned out to be the plot – it's borderline-interesting and not at all as pretentious as in other games of the genre. I also appreciate the effort that was clearly invested into creating these cutscenes – top-notch indeed. Just to be clear – this isn't The Witcher 3or The Last of Us level of storytelling. It's still musou in a Zelda mantle, but it's also interesting enough that I didn't want to just click it through, and at the end, it even gets a little emotional. A that's quite a feat a brain-dead hack-and-slash, which Hyrule Warriors is. 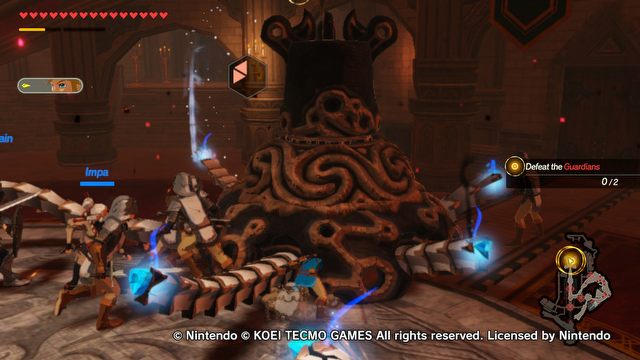 The story itself will be a treat for fans of the Zelda from 2017. The game takes us to Hyrule 100 years before the action Breath of the Wild. We visit the kingdom in its heyday and learn the details of the preparations that King Rhoam made in response to the foretold coming of Ganon. The story will especially please the encyclopedists, lovers of learning all the details, the lore of their beloved games – for me, it was just fine. I've never been a big fan of the stories is Zeldas. I truly love the series, but for different reasons.

The only thing in the story that bothered me was... Zelda. Not Zelda herself, but the kind of absolutely formulaic character development she was subject of. I mean, all these stories about princesses in distress... There are ways of writing more interesting female characters.

It's a secret to everybody

It's no secret that the Switch wasn't conceived as the most powerful console out there. Unfortunately, as a result, Hyrule Warriors will be remembered not only for the thousands of slain bokoblins, but also for the dipping framerate. When we fight dozens of enemies, fire up special abilities, and our comrades use their own skills, the game not only becomes quite illegible, but the framerate absolutely plummets. It may not ruin the experience, mainly thanks to the fact that Hyrule Warriors isn't a shooter. I have long got used to it as a true fan of the Switch, but that doesn't change the fact that it's simply wrong.

In optimizing the game for the Switch came at the expense of graphics quality. The grass, blurry backgrounds and enemies jumping right in front of the hero often load as pop-ups, showing how overloaded the console's CPU is. This is the first time I've seen the Switch refuse to take a screen-shot – which happened regularly in more spectacular moments. 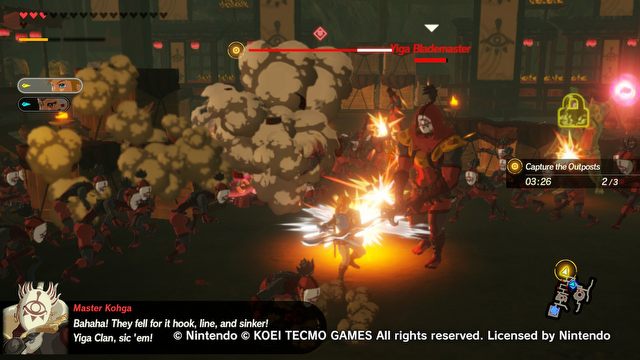 This is not the only technical problem Hyrule Warriors. The cameraworks are pretty sketchy sometimes, too. It's also a bit disappointing to see some crudeness of gameplay – there are a lot of invisible walls in the arenas; and gliding, copied from Breath of the Wild, looks cool, but is just a different type of walking in practice. You'll realize that by trying to fly over an obstacle. It's just an illusion and it dispels quickly. All these blemishes do not – fortunately – spoil the experience, but I expected more from a game of this series (I encountered the first glitch in Breath of the Wild about a dozen hours into the game). 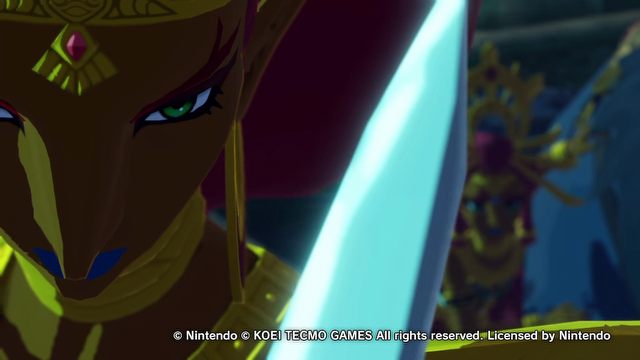 Despite some crudeness and average technological condition, I had a good time with Hyrule Warriors. Musou's proven formula provides a lot of fun, and chewing through the ton of main and side missions is a task for tens of hours. It's the perfect game to get away from reality for a while – complete a mission or two and put the console away.

If you're a fan of musou games, I don't have to convince you any further. You shouldn't be disappointed. Zelda fans who are anticipating Breath of the Wild 2 shouldn't be disappointed either, unless they were deceived by the announcements – one could be forgiven for concluding that Hyrule Warriors was a game along the lines of BotW. It isn't, but that's not terrible news. First of all, it's a relaxing slasher, which can drown a lot of time. And that was enough for me.

The counter in Hyrule Warriors claims that I killed 75,000 enemies, of which 25,000 by myself (the rest died when I controlled the divine guardian). I did it all in 40 hours. I have a feeling that the game is exaggerating a little with these numbers, but I there's no point arguing.

According to our users, Hyrule Warriors: Age of Calamity for Switch was a disappointment - the expectations before the release were higher than the current average user score.